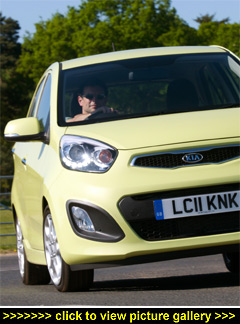 “Kia’s all-new Picanto is based
on the same platform and engines
of parent company Hyundai’s
excellent i10 models — and it’s
a very good buy indeed!”

LOOKS-WISE, THE ALL-NEW PICANTO is more in keeping with the best European City Cars such as the Ford Ka and Fiat 500, and certainly looks more appealing than the Hyundai i10.

And it's a world apart from the original models introduced seven years ago; those looked and felt cheap although they were popular. But that was the past. This all-new Picanto is the present and the future — 6,500 are expected to be bought by UK motorists this year, with 15,000 being the target for 2012.

The three-door models (due here in the summer) will appeal to younger drivers, both male and female, who are likely to be attracted by the price, low running costs and the three-door's sporty styling.

The new Picanto five-door model line-up offers the choice between two new 'Kappa'- family petrol powerplants: 1.0 and 1.25-litre engines that deliver fuel consumption savings over the previous units of up to 8.5mpg with CO2 emissions lowered by up to 15g/km.

Performance, both top speed and acceleration, are also improved. The three-pot 1.0-litre unit puts out 68bhp and 70lb ft of torque and, officially, returns 67.3mpg on the combined cycle.

The four-cylinder 1.25-litre is offered in three versions, all developing 84bhp and 89lb ft of torque: in standard guise fuel consumption is 60.1mpg; mated with a four-speed automatic transmission it averages 53.3mpg; and in EcoDynamics spec, fuel consumption is 65.7mpg.

Kia expect around two-thirds of UK customers to choose the 1.25-litre engine with most going for the lower-CO2 EcoDynamics spec. The 1.0-litre engine has tailpipe emissions of 99g/km and the 1.25 unit 109g/km, which reduces to 100g/km with the EcoDynamics Intelligent Stop & Go. This means that both the 1.0 and 1.25-litre EcoDynamics models are exempt from road tax; the 1.25-litre non-EcoDynamics engine (still with only 109g/km) is road tax exempt for the first year after which you'll pay just Ł20 per annum. Also keeping running costs down are low insurance groups — provisionally 5 to 10 with the mainstream model likely to be rated group 7.

The throaty-sounding three-cylinder, 1.0-litre engine runs to a maximum of 95mph and zero to 62mph takes 13.9 seconds — it actually sounds faster! The 1.25-litre unit tops out at 106mph and gets to 62mph from standstill in 11 seconds.

Test driving around the French city of Bordeaux and the region's celebrated vineyards, the 1.0-litre Picanto turned in a real-life consumption figure of 47mpg over 100 miles. Driven over a similar route and distance, the EcoDynamics 1.25-litre returned 47.4mpg. Both engines felt short of mileage and in need of freeing-up, so I would expect to see improvement on my test figures. Both needed to be worked hard to overtake slower traffic but weren't stressed running at low revs around town and made light work of motorway cruising.

The price for the new Picanto has gone up over the old models — but so too has the size and standard specification. Now a shade under 3.6-metres long, it has more legroom and foot space for rear seats passengers.

It's also a user-friendly City Car for four and a better ownership proposition to boot. Talking of which, the boot is bigger too; by 27 per cent, and now offers 200 litres of space (605 with the rear seats down).

Overall the new Picanto is a much more accomplished product: it feels sturdier; is more comfortable with a supple ride; the handling is good; it holds the road better; and the driving refinement is vastly improved.

And it looks a whole lot better, with muscular bumpers, flared wheel arches and sculptured lines running along the front and rear passenger doors, all of which give it a really dynamic appearance.

Improvements have been made inside as well: instruments and controls are logically sited, the specification is relatively high, safety equipment good and in most areas the quality of the trim looks and feels better.

ICE is provided by a RDS radio/MP3-compatibile CD player. Picanto 2 has four speakers; Picanto 3 has six. Grades 2 and 3 also have USB and AUX ports, an iPod cable and steering wheel-mounted audio controls.

Like most drivers, especially on hot days commuting in a city, I'm not sure I could live without air conditioning so grade 1 spec doesn't get my vote (the fact that it only has manually-adjustable door mirrors and steel wheels doesn't help, either). Go for grade 2: it's a better buy and really, at these prices, it's not worth skimping unless your budget is really, really tight. Likewise, the 1.25 is a better drive over the 1.0-litre and with grade 2 spec it only costs an extra Ł600.

The Picanto is a small car that has that 'grown up' feel about it. It also comes at a good price and with a good specification, low running costs and a 7-year/100,000-mile warranty. On top of that you get a comfortable ride and good looks. The only niggles are a nervous steering response at higher speeds and no reach adjustment on the steering wheel.

The price hike over outgoing budget models averages Ł800 (or 8%) but the hugely improved all-new Picanto models offer far more than an eight per cent improvement over the old ones. They also drive and handle so much better. — David Miles