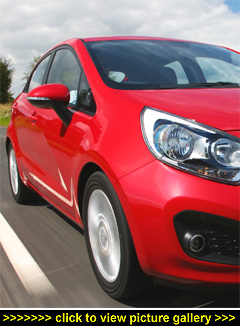 AVAILABLE NOW IN FIVE-DOOR supermini-sized hatchback guise (three-door models will be along shortly) with a choice of four engines, including a headline-grabbing three-cylinder 1.1-litre turbodiesel with tailpipe emissions of only 85g/km that, officially, is capable of an amazing 88.3mpg. That's far better than any other non-electric car currently available, including hybrids.

Equipment levels are good, even for the starter-level 1, which comes with a height-adjustable driver's seat, two-way steering column adjustment on the petrol model (height-adjustable only on the entry-level diesel), trip computer, front electric windows, MP3-compatible RDS radio and CD player with USB and AUX ports, split/folding rear seats, daytime running lights, speed-variable wipers, headlamp levelling, and 15-inch steel wheels. Bluetooth is also standard on the petrol-powered entry model, and on all versions with other trim grades. 1 Air trim is for buyers who want AirCon without upgrading to level 2.

This new five-door Rio is radically different from its more traditional and simplistic predecessor. For a start it is longer, wider and lower, and boasts a 70mm greater wheelbase. A new interpretation of the Kia 'tiger nose' grille fronts the Rio, underscored by a restyled bumper and spoiler. Throw in some smart body-sculpting, a forward-leaning wedge profile topped off by a coupé-like roofline and you have a sporty looking little number.

Inside, compared to the previous Rio, it's as refreshingly different as it is on the outside. Clean, modern and with higher grades of materials and good fit and finish. Signature Kia features include the three-dial instrument cluster with red backlighting and a wide, horizontal fascia blended with bold, unexpected touches such as the neatly-integrated toggle switches on the centre stack.

Best of all is the spaciousness, practicality, and driver-orientation. Thanks to the longer wheelbase, and helped by a lower and wider floorpan, there's now more legroom (45mm in the front) and 34mm more knee room in the rear. And you'll also find more headroom.

The boot is also wider, by 100mm. And more accommodating, too, with 288 litres, supplemented by a number of useful, bespoke storage areas spread throughout the cabin. When additional cargo space is required, the 60:40 split rear seats can be folded down (although they don't fold completely flat) to make a 923-litre loadbay.

But enough about practicality. How does it go? Tested here is the 74bhp, 1.1-litre, three-cylinder CRDi turbodiesel EcoDynamics with an official Combined Cycle fuel consumption of 74.3mpg. Road tax, incidentally, costs nothing although company car users will pay 13% BIK tax.

With 74bhp and 125lb ft of torque from just 1,500rpm, the three-pot motor is a real gem. While it has the usual throaty three-cylinder roar when accelerating hard, it is much smoother and more responsive than I was expecting. It also comes with Kia's ISG (Intelligent Stop-and-Go) system which operates very quickly.

Mated to a six-speed manual 'box with fifth and sixth gears inclined towards high 'overdrive' ratios for economy, lots of gearchanges are needed to keep the Rio moving along smartly at speeds over 50mph, particularly on hilly routes.

Accelerating from zero to 60mph takes a leisurely 15.5 seconds; maximum speed is 98mph. However, it's the smoothness and refinement of this engine that counts although the actual road test economy of 55.3mpg was disappointing given the official 74.3mpg figure.

While the smart styling, interior space and 55+mpg are the new Rio's main selling features, the handling and composure of the ride aren't — mostly because there's quite a lot of road noise intrusion. The suspension was 'bouncy' and the car was easily unsettled by our poor UK roads. Plus there was significant body lean when cornering, all of which doesn't make for the most comfortable of rides.

The design may be European but Kia need to follow other manufacturers and tune their cars to UK road conditions to make them as competitive in the handling and comfort departments as the Fiesta or Polo.

Reasons to buy this new Rio include stylish looks, good interior space, good specification, low tax, good fuel economy potential and good prices. And, a big plus, Kia's 7-year / 100,000-mile warranty. Against that there's the unsettled ride, unsophisticated handling and dull steering response which make it functional rather than fun to drive.

In this sector the extra cost of buying diesel-power over petrol means that regardless of how good a diesel engine is, most customers go the petrol route. So even this little gem of a new 1.1-litre turbodiesel probably isn't, by itself, going to seal-the-deal against a Fiesta or Polo, both of which are also available with big discounts. However, if your priorities are space and roominess, then the Rio could have your name on it. — David Miles