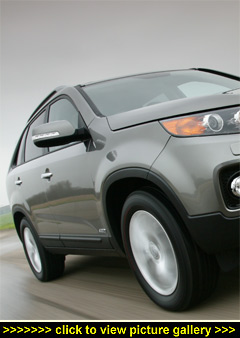 “The second of a brace of new Kia
models has now arrived in the UK.
The Venga mini-MPV was first —
now an all-new family-sized 4x4
called Sorento is added to the
Korean brand’s model line-up...”

IN FACT, KIA HAVE LONG HAD A SORENTO 4x4 in their line-up but, as modern day 4x4s go, it was a bit of a dated monster with a ladder frame chassis and a less fuel and CO2 efficient 2.5-litre turbodiesel engine. However, it was a tough workhorse and could tow 3,500kgs.

Today's Sorento is very much what the world markets require: a new 2.2-litre CRDi Euro V, aluminium diesel engine with more power, more torque, better mpg and lower CO2 plus two/four-wheel drive, five/seven seat models with attractive styling. To complete the line-up, a 2.4-litre petrol engine is an option for just one model which has five seats — and it's the headline price leader for the range. Only around five per cent of Sorento UK sales will go to this version.

The new Sorento is priced from Ł20,495 right up to a hefty Ł29,795. Two-wheel drive versions carry 'Sorento 1' badging; four-wheel drive models are badged 'KX1', 'KX2' and 'KX3'. All KX models have seven seats as standard. A six-speed automatic transmission is available on all 2.2-litre diesel models and around half of UK Sorento customers are expected to go for this option. The jewel in Kia's crown is, of course, their seven-year/100,000-mile warranty which now covers the new Korean-built Sorento.

Kia expects to sell around 1,200 units in the UK this year but given the increased interest in 4x4s since our severe winter, this total could increase significantly. However, it is a tough marketplace and the Honda CR-V is well established in this sector as too is the Land Rover Freelander plus, of course, the Toyota RAV4 and Ford Kuga and lots of other 'crossovers' that have taken sales from the 4x4 segment.

Hyundai also offers five and seven seat versions and manual and auto options — and prices are keener, at Ł21,495 to Ł25,495, but the warranty is for five years (as opposed to Kia's seven) and with unlimited mileage. If load space is a consideration then the Santa Fe offers a massive 2,247 litres with the middle and rear rows of seats folded. The new Sorento only offers 1,546 litres. Both have a maximum braked towing weight of 2,500kgs for manual transmission models; 2,000kgs for automatic gearbox versions. Hyundai expects to sell 2,000 Santa Fes in the UK this year.

In my part of the UK, the Cotswolds, where country folk traditionally have 4x4s (and the influx of well-off urbanites who have moved here have also adopted all-wheel drives), there seems to be more Santa Fes appearing on our country roads. The good thing about the Santa Fe and Sorento is that like many modern 4x4s they offer fuel-saving two-wheel drive for most of the time and automatically switch to all-wheel drive when the front wheels lose traction. They both have selectable 'lock mode' 50:50 torque split for when the going gets tough and Hill Start Assist Control and Downhill Brake Control for tough conditions. Electronic stability control is also fitted as standard.

What is apparent is that today's SUV owners have moved away from the heavyweight 4x4s with their tall upright stance and have gone for the more socially acceptable and less aggressively styled products. They seem to like the option of having seven seats like an MPV even though most of the time the rear row is left folded into the floor giving more load space for all sorts of things — from recreational equipment to shopping to the family dogs.

The Sorento exploits this modern usage well. Its chunky monocoque body has a sleek design giving it a 'softer' and more acceptable image. In fact, the Sorento looks a classy vehicle and attracted the attention of one of my neighbours now in the market to return to owning a mid-sized SUV following the very long and hard winter we have just survived.

As usual the question was How much? My answer, for the test model I had, the 2.2 CRDi with the top-of-the-range KX3 specification which comes with automatic transmission, was Ł29,795. His answer: "What? Nearly thirty grand for a Kia!". So this is the problem: Can the Kia brand yet command a price tag that high? The more or less equivalent Santa Fe range-topping model with seven seats costs Ł25,495 — a significant Ł4,300 less than the Sorento.

Having driven both of them there is nothing between them for performance, comfort, build quality and specification but the Santa Fe returned a real-life 38.2mpg against the Sorento's 33.5mpg for the same type of motoring over roughly the same distances. Given the lower price, better mpg and marginally more load space, the sensible choice is the Santa Fe but against that the Sorento has an extra two year's warranty — a tough call.

In terms of styling, the Sorento looks sharper, more distinctive and perhaps more suitable for European tastes. Inside, apart from the extra load space, there is little to choose between them in terms of specification, quality and the layout of the controls but, as with the Santa Fe, I hated the cumbersome foot-operated parking brake. Some of the plastic trim feels and looks cheap but it will be child- or dog-proof. And whilst the Santa Fe can carry off the interior quality at its lower price, the Sorento cannot. For nearly '30 grand' it needs to be better.

The new 2.2-litre, four-cylinder, turbodiesel, high pressure direct injection diesel engine is a strong performer and yet remains frugal for fuel consumption. An average 33.5mpg is very good for a vehicle of this size but, as I noted earlier, it didn't quite match the Santa Fe. Under load the engine can get a bit 'loud' but that eases off when cruising speed has been reached. The six-speed auto gearbox was very smooth with seamless shifts and it didn't appear to dull the performance or harm fuel economy or indeed push up the CO2 emissions to any great extent.

The Sorento's ride was generally well controlled with a nice balance but it becomes a bit unsettled and fidgety on poorer road surfaces at lower speeds. The steering was precise but the feedback was dull.

As from 1 April (2010), this new top-of-the-range Kia Sorento was hit by the new higher rate 'First Year' Vehicle Excise duty of Ł425 instead of the previous Ł215. For future years the VED bill is Ł235. The top Santa Fe model is the same. For business user-choosers and company car drivers the Benefit-in-Kind tax bill is 29 per cent.

There is much to like about the Sorento: it is a very versatile, practical, easy-on-the-eye vehicle with lots of equipment and real 4x4 ability but it is just too expensive compared to the almost identically-engineered Hyundai Santa Fe and it's not classy enough to carry this price tag despite its long warranty. Other good points include the seven-year warranty, smart exterior styling, roomy interior, 5-star Euro NCAP safety rating, strong engine, smooth auto transmission and good fuel economy. — David Miles