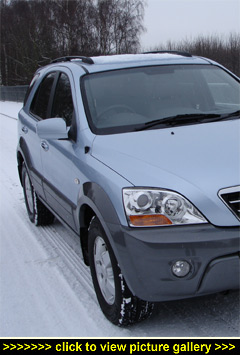 “Crossovers are okay but for real
space it’s still hard to beat a big SUV.
Kia’s easy-to-live-with, pleasant to
drive and family-friendly Sorento is
very big on space and specification
— but not so big on price...”

DESPITE THE EVER-INCREASING NUMBER OF CROSSOVER models coming to market, Sport Utility vehicles such as Kia's Sorento remain popular with UK buyers for good reasons. Not only do customers like the commanding view in traffic and excellent interior room for five adults, they also appreciate the flexible cargo space.

Another core SUV feature — and it only takes one bad winter to make you truly appreciate its value — is the on-demand 4WD system that's a boon not just in snow and ice but in all bad weather conditions on normal roads. Not forgetting, of course, an SUV's ability to go off the beaten track and their 'first choice' suitability as tow vehicles.

Customers also appreciate the Sorento's neat yet substantial-looking styling. Unlike many of its peers there's no fussy detailing, just clean lines — and eye-candy is restricted to a subtle chrome grille and quality chrome door handles. That's not to say it doesn't stand out: judging by the looks our test car received during its week with MotorBar, it has more than enough road presence and for a price that's far more appealing than a similarly-sized German-badged equivalent.

Prices start at Ł20,695 for the entry-level 2.5 CRDi and go up to Ł27,495 for the range-topping Titan Auto. The 2.5 CRDi XS Auto, as tested here, costs Ł24,995. For the record, there is only one engine available across the range — a 2.5-litre turbodiesel. Not a problem because this four-cylinder, twin-cam turbodiesel is fitted with a variable geometry turbocharger that produces 168bhp and 290lb ft at 2,000rpm. Importantly, more than 214lb ft of this is available from just 1,300 all the way through to 4,000rpm, which is beyond the point at which the engine reaches peak power.

Consequently the 2.5 turbodiesel is suitably punchy and serves up excellent flexibility in everyday driving. Its pace feels better than the official 11.9 second 0-62mph time suggests, and there's always ample urge for overtaking. And it's a nice match with the five-speed automatic 'box which also features a sequential manual mode. Fuel consumption is reasonably economical for this class: officially 25.7, 38.7 and 32.8mpg, respectively for urban, extra-urban and combined. Our week's test saw a real-world average of 31.2mpg and a large 17.6 gallon fuel tank offers a touring range of well over 500 miles between fill-ups.

Climb aboard — the doors open and close smoothly and shut with a satisfying 'thunk' — and you'll find a well laid-out and airy cabin. There really is a huge amount of space as can be gauged by the generous elbow room on both sides of each front occupant. The tidy-looking dash and centre stack — home to the automatic dual-zone climate control and audio systems — is logically laid out and controls are easy to use on the move.

The hooded three-dial instrument array consists of a central speedometer flanked by a rev-counter and a combined fuel/temperature gauge; all feature clear graphics. The fuel/temp gauge also incorporates a 'gear' display for both the automatic modes and the manually-selected gears (1-5). The selector lever works with a positive action, and is comfortable in your palm. Also pleasant to grip is the four-spoke leather-wrapped steering wheel.

From the commanding driver's seat there's an excellent view of the road down the bonnet. In fact, visibility all round is first rate and makes parking and placing the Sorento a breeze. The well-shaped and supportive front seats come with height adjustment which, for the driver, more than makes up for rake-only steering wheel adjustment. In addition to normal fore and aft adjustment, the driver also gets front and rear seat height adjustment plus lumbar support.

Well considered touches abound: particularly useful were the two damped, rubber-lined drawers at the base of the centre stack; and the illuminated ring around the ignition switch because no matter how intimately you know your car, this always makes getting the key in so much easier in the dark. Drop-down sunglass holders are incorporated into the roof console along with a display for range, average speed, driving time and external temperature. And there's also a compass, altimeter and barometer for going where the wild things are!

Practicality is undeniably one of the Sorento's core values. A 60:40 split rear seat extends the already seriously spacious 900-litre boot. Seats folded, the extended — and totally-flat — load platform provides up to 1,880 litres of cargo space. The front passenger seatback also folds forward to help accommodate anything big and long. All told, and with a braked towing capacity of 3,500kgs, the Sorento makes a practical and comfortable alternative to an estate car.

A cargo area luggage net is provided and there are also full-width storage areas beneath the floor (with a proper stay for the boot floor while loading), twin storage bins within the rear quarter panels and plenty of rubber-lined cubbyholes scattered throughout the cabin. In addition there's a two-tier central front armrest-cum-storage box and a deep glovebox with a separate upper shelf.

An anti-scuff plate protects the rear bumper during loading and the tailgate aperture is big enough to make loading even the largest items a doddle. Especially handy is the lift-up rear window that can be opened independently of the tailgate — perfect for tightly-parked supermarkets and on-the-fly light loading.

When it comes to carrying passengers rather than cargo, the Sorento is equally accommodating. There's loads of room in all directions in the back, including headroom. The other good news for rear passengers is that the split backrests can be individually reclined and the large doors make getting in and out effortless. Three adults can travel happily in the back; with the centre armrest down, two can chill out in genuine comfort. In fact, not once did we hear a single word of complaint from any back seat passengers although several did fall asleep!

The five-speed automatic features a Sports mode which allows the driver to override gearchanges manually using the selector lever. In Sports mode upshifts have to be made manually but downshifts are still made automatically as the road speed drops; first gear is selected for you when the vehicle stops. For the record, all shifts — up and down, manual or automatic — are made smoothly. Most of our test week was spent driving through the snow-covered Kent countryside and the automatic performed brilliantly. The heated seats deserve a special mention: despite only offering a single setting, they warm all the lower back, the full seat cushion and under the thighs. Bliss.

Despite the Sorento's noticeable ground clearance there's minimal body sway, even when pressing on along twisty lanes. What roll there is, is car-like and the Sorento feels secure and responsive from the driver's seat. The ride is soft and good enough to make for a smooth drive over most road surfaces, helped by the high-profile comfort-oriented tyres.

The speed-sensitive steering is nicely weighted for a 4x4 and the Sorento tracks true on motorways where, incidentally, the cabin is at its quietest. Three-point turns are accomplished without fuss, thanks to an excellent turning circle. Brakes are nicely progressive with good modulation, and when you apply the anchors have real stopping power.

The Sorento's 4WD system is an all-electronic, torque-on-demand, full-time four-wheel drive set-up that automatically varies the amount of torque to the front and rear wheels. No driver intervention is called for and the car is always running in the optimum 4x4 'trim' regardless of road surface or weather conditions.

There are also low-ratio gears for off-roading which the Sorento — with its sturdy ladder-frame chassis, 20-centimetre ground clearance, decent approach and departure angles and sturdy under-body skid plates — is well equipped to tackle.

Travelling anywhere in the Sorento is always enjoyable wherever you're sitting: the seats are big and comfy, the cabin well insulated from engine, wind and tyre noise and while it's not a hard-charging Sports Utility in the BMW X5 mould, that doesn't stop it being pleasant and relaxing to drive on a daily basis. As 'family friendly' transport that's big on space and specification but not big on price, the good-looking Sorento makes a lot of sense. — MotorBar