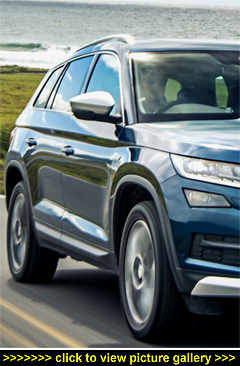 “Many a large 4x4 SUV lays claim
to being ‘all things to all families’
but Skoda’s seven-seater Kodiaq
Scout really does cope with just
about anything you can throw at it...”

THE AWARD-WINNING KODIAQ has, in a very short time, established itself as the go-to model in the large SUV sector. With petrol and diesel engines powering both 2WD and 4WD variants, along with the choice of five or seven seats, it's easy to see why. Most versatile of all Kodiaqs is the aptly-named Scout which comes with all-wheel drive and a 'rough road package' that includes off-road-friendly bumpers, an engine guard and underbody stone guard, plus Hill Descent Assist.

While it's got the body and wheelbase to pack in seven in comfort or offer up to 2,005 litres for cargo in its loadbay, its big bodyshell is sleekly designed and incorporates a flattering glasshouse treatment that lends it the look of an upmarket lifestyle estate car. Its distinctive 'face' is as appealing as anything you'll see on any of its premium Audi/VW Group stablemates, and there's no denying the Scout gives off some classy vibes.

The Scout is differentiated from other Kodiaq models by a bespoke exterior design package that includes more rugged off-road bumpers, silver door mirrors, silver-finish skid-plates; the bonnet is a crisply-profiled clamshell item above slim LED headlights, while down the sides 19-inch anthracite alloys are framed by distinctive squared wheelarches.

A broad line-up of powerplants, ranging from 147 to 187bhp, ensure there's an engine to suit all tastes. But if you're heading off-road there's no substitute for torque and the one we'd take is the one we've been driving this past week — the 187bhp (190PS) 2.0 turbodiesel partnered with a responsive DSG twin-clutch autobox and equipped, as standard, with four-wheel drive.

It's a willing motor, this likeable four-pot 2.0-litre TDI, happy to dish out power across the whole rev-band whenever your right foot calls for it, with acceleration at all speeds delivered seamlessly via the seven-speed autobox. It also gets you to the benchmark 62mph in good time: 8.8 seconds. And you don't go short of torque either — the muscular 295lb ft makes it relaxing to drive in heavy traffic and on busy roads and ensures usable performance even when all seven seats are occupied or you're carrying the maximum cargo load. And with a top speed of 129mph, cruising motorways at the UK's legal limit is a refined business.

When you need to press on then Sport mode will make progress enjoyably purposeful but otherwise letting the DSG 'box manage it all for you makes plenty of sense. However, whenever DIY shifting is called for you can nudge the selector lever to the left into Manual mode to personally take charge of gear shifting.

And there's more good news. Given what it has to do, and being specced with both four-wheel drive and an autobox, the seven-seater Scout goes surprisingly easy on the fossil fuel, averaging 39.8mpg over the course of our week's hard driving. Officially, the combined cycle figure is stated as 49.6mpg but going by our test figures real-world drivers could easily get used to regularly seeing 45mpg.

Of course, none of this counts for much unless the cabin is fit for purpose — and in the Kodiaq Scout's case, we're pleased to say that it's a peach. Swing open the driver's door and settle in the invitingly shapely Alcantara-upholstered seat. Immediately you feel at ease, partly because of the commanding driving position and unimpeded views out over the bonnet (and, indeed, to all points of the compass) and partly because of the spaciousness and plush, upscale feel of it all: a wood finish fascia and door inserts, Alcantara door panels with ambient lighting strips, stainless steel pedals, and plenty of tactile trim.

Both the driver and front passenger enjoy powered seats with three-stage heating and three-setting memory recall, effective lumbar adjustment, and height-adjustable seatbelts. The Scout's multifunction steering wheel is a good-to-grip three-spoker. And there's no messing with keys getting in or starting — you'll find the engine Start button on the side of the steering column.

Good headroom is another must-have and in the Kodiaq you get a generous fist of it along with ample room in the footwell to drive, should you so wish, in the chunkiest of outdoor boots. There's also a decent rest for your left foot. Naturally there's a fingertip operated electric parking brake with a handy auto-hold function that's just the biz in stop-start traffic.

In front of the driver is a set of easy-to-read white-on-black dials and a multifunction digital trip display (with information selected via the switch on the steering wheel) that shows all the essentials including a digital speed readout and navigation prompts. The posted speed limits are shown on the mapping. To the left, and inset centrally in the fascia, is a large 9.2-inch infotainment touchscreen ready to satisfy all your connectivity, infotainment and navigation needs.

The SatNav is as foolproof as they come — it's totally straightforward to use with timely spoken directions and can also find you shortcuts and, when you arrive at your destination, also indicate the best places to park. The infotainment system also provides a boosted signal with the integrated WiFi and there's SmartLink+ for smartphone integration. Bluetooth, a DVD drive and DAB give you further entertainment choices.

Additionally there is Infotainment Online for traffic reports, weather forecasts, petrol station locations, calendar updates, etc; it can also arrange a service with your local Skoda dealer for you, as well as, in the event of an accident, alerting the emergency services.

Whether you're a baby boomer, millennial or Gen X, you'll need a place to stow all the 'pocket-lint' essential to everyday living — no problem in the Kodiaq because it offers a multitude of hidey-holes including not one but two large gloveboxes (one of which is cooled), 1.5-litre bottle-holding door bins, a large drop-down sunglasses holder, cupholders, a deep lined drawer-cum-coin box in the dash, a net pocket close to the front passenger's knee, and a huge bin under the wide, sliding and height-adjustable central armrest.

'Simply Clever' features include a compact umbrella holstered in each front door, a parking ticket holder, an ice scraper inside the fuel filler flap (so it's not locked inside the car when you really need it!), protective strips that curl around the door edges as the doors open, and lower door sections that cloak the sills and keep them, and your legs, clean in mucky weather.

Getting up into the Scout's rear cabin is easy thanks to large door openings. Like the front, the rear compartment is awash with space; more impressive when you consider that within its 2.8-metre wheelbase there are seven seats laid out and virtually no restrictions on leg, knee and foot room — all very limo-like. The second row chairs are well shaped and big enough for those wearing XXXL kit while a well padded, drop-down central armrest improves the lounging experience.

Not only that but the headroom is as good as in the front, backrests are multi-adjustable and the seats can be slid eight inches forwards/back depending on where you want to inject more room — essential as bodies are rarely all of a similar size, so each and every one of the seven can achieve the bespoke setting that's perfect for them. Five in the first two rows is perfectly doable, with three travelling side by side quite amicably.

As you'd hope, second-row passengers also get their own dedicated air vents along with deep 1-litre bottle-holding door pockets, cupholders, and unrestricted views of the world through the big windows. Reassuringly if you're ferrying smaller children, the rear doors can be locked by the driver at the touch of a button.

Unlike some seven-seaters' third row seats, the Scout's don't require advanced Yoga skills to reach them. The pair of individual seats fold out from the boot floor and can be easily reached after tilting-and-sliding either second-row outer seat. They're adult-friendly too but the kids — who seem to love 'em — will likely beat the grown-ups to it!

Even rolling on twenty-inch alloy wheels wrapped in meaty 235/50 tyres the Scout earns a merit badge for comfort with its compliant ride compensating for the potholed, third-world-grade tarmac slapped over too many of the UK's roads.

The Scout gains a little more space between it and the ground than its less off-road-tuned range-mates, but that hasn't compromised its steadfast on-road composure any — power it through twisties and you'll find all the grip you need.

Body control is good, the steering responsive enough to guarantee your chosen line is followed neatly, and the brakes reassuring. Adding to the ease with which this seven-seater can be punted along is its upright nose and short front overhang, making this full-size SUV easy to place accurately in squeezed rush-hour traffic or when exploring off the beaten track.

While the Beast from the East didn't visit the UK during our week with the Scout, from the flooded tracks and treacherous muddy lanes we did encounter, and from previous experience of ' Kodiaqs, it wouldn't have mattered if it had. Snow and ice and other weather not nice is water on a duck's back to the four-wheel drive Scout.

Skoda's Drive Mode Selection is standard and offers the driver a driving mode tailored for a range of driving conditions: Normal, Eco, Sport, Individual, and Snow. For rough terrain there's a dedicated setting — pushing the Off-Road button by the selector lever takes the Scout way above the level of tackling just a muddy car park by adapting the chassis, engine and brake settings for serious off-road work. Along with an electronic diff lock, Hill Descent Assist kicks in on steep downhill slopes, maintaining a safe speed when descending tricky downhill slopes.

For off-grid conditions you can display appropriate off-road 'dials' on the main screen: compass, body tilt, and altitude — the most useful is probably wheel turn angle; indispensable when wading rivers as well as in deep snow and mud where it's sometimes hard to tell exactly which way the wheels are pointing.

Fill all six passenger seats with people and you'll still have room for more than a picnic hamper in the 270 litres behind the third row. At the other extreme, with just the driver and front passenger in situ, there's a humungous 2,005-litre loadbay for cargo. Loading is a breeze courtesy of a fast-acting powered tailgate, conveniently opened and closed using either the key-fob or from the driver's seat.

Thoughtful touches include a dedicated underfloor storage slot for the rollerblind load area cassette unit and a variable-height boot floor. A feature you might not use every day but one that's worth its weight when you do need it, is the load-through central section of the second-row backrest that folds fully down to accommodate extra-long items.

On hand to make sure your shopping stays put are sturdy pop-out bag-holders and a set of three strong, stretchy nets. If it suits, you can divide the variable-height boot widthways by simply setting the spring-up floor panel to its vertical position.

Night-time boot work benefits from not just two boot lights but a third self-charging removable LED flashlight. If it's a towcar you want then you've definitely come to the right place — The Caravan and Motorhome Club's Towcar of the Year, the Kodiaq will safely haul a braked 2,000kg.

Skoda's Kodiaq is smart, sassy, easy to drive and even easier to live with. And despite its near-5-metre footprint the Scout is at home and confident in the concrete jungle as much as it is out where the wild things roam. All things to all families? You bet! ~ MotorBar