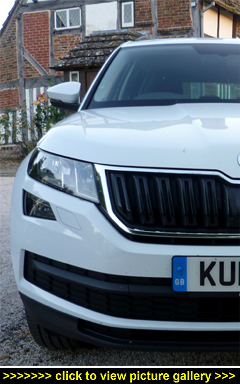 “You probably know that the Kodiaq
is a type of bear; in fact it’s one of
the largest, equalled only by the Polar
bear. Skoda’s all-new SUV is also
named Kodiaq, which if nothing else
tells you something about its size...”

THE KODIAQ IS THE CZECH carmaker's first seven-seater SUV and size-wise it certainly measures up: 4.7 metres from nose to tail and 1.7 metres road-to-roof (although dwarfed by a Kodiaq bear that on its hind legs stands over ten feet tall). Still, substantial beasties the pair of them.

Spacious inside (the Skoda, not the bear), it has the added advantage of coming in either five-door, five-seater spec or as a 'tribe'-friendly seven-seater for those with sprawling families.

Apart from the trim level, front-wheel drive or all-wheel drive is the other major choice you'll need to make. And when it comes to what's under the clamshell bonnet, there's an engine to suit every customer's individual needs.

After all the Dieselgate brouhaha many motorists will be pleased to find petrol firmly on the menu — in the Kodiaq's case that means a 1.4 TSI with either 123 or 148bhp, or a 2.0 TSI pumping out 177bhp. Those sticking with oil-burners are offered a torquey 2.0-litre TDI turbodiesel and can decide between 148 or 187bhp outputs. Two-pedal drivers will be pleased to know that a DSG twin-clutch auto gearbox is also available.

The upbeat SUV market offers buyers a glut of choices but what underpins the Kodiaq's appeal (apart from its wealth of fit-for-purpose qualities) is its size and price combination — you can pay as little as Ł21K… or as much as Ł35K. Whatever the size of your funds, you'll be getting a lot of SUV for your Łsd.

Before stepping up and in, a quick look confirms why Skoda received 30,000 expressions of interest from potential customers as soon as the UK order books opened. Even in close-to-entry-level SE trim the Kodiaq is well endowed with an upscale 4x4 allure that punches well above its price-tag. Fronted by slim headlight units with sweeping LED daytime running lights flanking a thrusting chrome-edged grille and profiled clamshell bonnet, it looks the dual-usage on/off-roader part (even though some will only be bought with front-wheel drive).

A high waistline, sculptured side panels and flat-cut wheel arches with black protective inserts housing 18-inch alloys, are all capped by a flowing 'fastback' glasshouse that adds a hunkered-down attitude to the Kodiaq's well-planted stance. Finishing off the crisp tail treatment is a discreet rear spoiler, distinctive slim multi-faceted-finish LED back light units that wrap around into the rear wings, and no-show exhaust tailpipes.

Swing open the driver's door and you climb aboard — the much-valued 'commanding' driving position is a given. Combined with superb all-round visibility, it makes the Kodiaq very easy to place and to drive. Headroom is amazingly generous — not just a fist of it but a double-fist. Hat lovers will rejoice! As to room for elbows, knees and legs, well there's loads.

Cabin ambiance is well-judged and upscale and easily on a par with SUVs costing half as much again. Complementing the comfortable looking and comfortable to travel in black fabric upholstered seats is a Sporty satin black leather-wrapped multifunction steering wheel with well-shaped thumb cut-outs that nicely accompanied by the palm-fitting DSG selector lever knob — talking of which the six-speed autobox's changes are as satisfyingly fluent in the city as they are when hard-charging on the open roads. Particularly appreciated is the ability to flick from Drive to Sport mode in an instant by lightly tapping the lever.

Adding to the convenience factor is keyless entry and start, an electric parking brake that comes with a handy auto-hold function, automatic drive-away door locking, one-shot up/down windows (not just at the front but all four), auto-dimming rearview mirror, heated electrically-adjustable door mirrors, cruise control and speed limiter, rear parking sensors, tinted glass with privacy glass from the B-pillars back, and efficient dual-zone climate control that will keep everyone cool on even the hottest days.

The dials, separated by a multifunction driver's trip computer, are stylishly traditional with mini-dials inset into the rev-counter and speedometer for engine temp and fuel. Taking centre stage on the smartly trimmed, metallic-finish fascia is an 8-inch infotainment touchscreen with direct jump buttons on each side for all the major menus.

Comms is clearly a high-priority and the Kodiaq boasts the latest infotainment features to accompany its crisp and bright central display. A popular option for SE models, and fitted to our test model, is the Ł755 Amundsen SatNav system that uses the 8-inch touchscreen and provides seamless smartphone connectivity plus integrated WiFi, DAB, SmartLink+, USB, SD card reader, WLAN and Infotainment Online (for access to Google Earth/Street View and checking petrol stations, parking information and weather forecasts, etc) for one year.

For the record, higher up the trim ladder there's wireless smartphone charging, a premium Canton sound system, and a larger 9.2-inch touchscreen.

Standard on the SE is Skoda's Connect which not only provides traffic reports and calendar updates but can contact your Skoda dealer to arrange a service and, more importantly, automatically call the emergency services to summon help in the event of an accident.

Surprisingly, one thing quite a lot of bigger cars fall short on is in-cabin storage — not so the Kodiaq. Starting with two gloveboxes (the lower one is cooled), there's generous storage space with capacious lined door bins that will easily hold a large Prosecco bottle, drop-down glasses holder, a deep box under the slidable and height-adjustable armrest between the front seats along with a very accommodating open centre console tray with another lidded tray (with 12v power, USB and Aux ports) ahead of the gear selector, multiple cupholders, a net compartment on the front passenger's seat console, a deep drop-down box in the dash to the right of the steering wheel, and some very handy 'sleeve' pockets on the inner sides of the front seat backrests.

Skoda have also included some 'Simply Clever' features including umbrellas stored in the front doors, an ice scraper in the fuel filler flap, and protective plastic strips that on opening pop out and wrap themselves around the trailing edges of the front and rear doors to protect them (and adjacent parked vehicles) in tight parking spaces. Yet another thoughtful touch is the sill-covering lower door sections that keep your trouser-legs and the like clean in dirty weather. All of which make everyday life with the Kodiaq even more agreeable.

Two adults can share the Kodiaq's expansive rear cabin very cordially indeed, each with more than enough 'territory'. Headroom, despite the slanting roofline, is every bit as impressively generous — again, a double-fist's worth — as it is in the front. Visibility out (and light in) is excellent and having a large third side window is a definite 'plus'. Couch-slouches will just lurve travelling in the rear cab thanks to multi-adjustable backrest angles and well-sited outer armrests; the drop-down central armrest is wide and with it folded away three can sit side-by-side very sociably.

Adding to the lounge-like-you-mean-it space — there's easily room for a six-footer to stretch out behind a six-footer seated ahead — is the abundant foot- and knee-room; enhancing the lounging experience is the fact that the rear seats slide fore/aft by over eight inches (21cms). Also welcome are big bottle-holding door bins as fitted to the front doors. Ferrying youngsters in the back? The good news is that you can child-proof the locks simply by pressing the button on the driver's door switch panel.

The boot is pretty humongous — even with all five seats in use there is still a massive 720 litres for luggage. Remote release buttons in the boot make folding down the 60:40-split rear seats the work of a moment — do so and you'll have a pretty awesome 2,065-litre loadbay. Better still, it's easily accessed through the wide and high-lifting tailgate.

Unlikely as it is that you'll need it, but there's extra storage under the boot floor! For those owners who have a need to haul (boats, caravans, and horse-boxes), know that the 148bhp 1.4 version will pull a braked 1,800kg. A powered tailgate is, as you might have guessed, optional lower down the range but standard the higher you go. Of course bag hooks are also fitted: mounted on a rail two to a side, they can be positioned exactly where you want them; also keeping your cargo in its appointed place is a set of three tough, stretchy nets.

These days motorists know better than to judge an engine by its size, or even by the number of its cylinders. The turbo 1.4-litre TSI petrol unit beating under the Kodiaq's bonnet is well endowed with 148bhp backed-up with a healthy supply of torque (184lb ft of it) available from a low 1,500rpm.

It's a strong and responsive engine that according to the official Combined Cycle figures drinks unleaded at the rate of 44.8mpg — in real-life it's almost that good, returning 41.7mpg during our hard-driven week. Owners with less leaden right feet than MotorBar's reviewers shouldn't have much trouble matching the official numbers. Economy is clearly helped by the Active Cylinder Technology fitted to 148bhp versions of the 1.4 TSI which shuts down cylinders under light loads to save fuel.

Top speed is a genteel 123mph; it eats motorways for breakfast, serving up a refined cruise at the UK's legal limit. The dash to 62mph is done and dusted in 9.6 seconds, although it feels faster. While left in Normal mode the 1.4 is eager to please whatever your speed or revs; however, flick the double-clutch autobox's selector into Sport mode and it feels decidedly potent, surging forward with smoothly snappy shifts and real (and very satisfying) intent. Should you prefer to manually override the auto (for towing or just for the fun of it) that's fine too, with up/down shifts at your command every time you nudge the lever fore/aft in manual mode.

High-riding SUV it may be, but the Kodiaq — which uses the same Volkswagen Group's MQB chassis/platform as the highly-praised Skoda Superb saloons and estates and which also underpins the highly-rated new VW Tiguan — doesn't disappoint when you point its nose into a series of bends. Far from it; body control and balance is good and reassuring, grip is fine (even running in two-wheel front-wheel drive), and there are no complaints about the steering feel and responsiveness (it takes sharp direction changes in its stride) and none at all about the brakes. In short, when you want it to, this Kodiaq can positively hustle.

Adventurous drivers who want more can choose a model with 4WD — it's an on-demand system with an additional driver-activated Off-Road function that adjusts the chassis, engine management and brakes for off-road conditions. There's also a Dynamic Chassis Control adaptive suspension option. More importantly for some will be the quality of the Kodiaq's ride rather than the driving dynamics or how far into the wilderness it can go.

In reality the Kodiaq rides very well indeed, even rolling on the 18-inch wheels. Overall, by whatever criteria you choose to judge it, this all-new Kodiaq makes light work of everything from the dreaded school run to family picnics and even Continental school holiday breaks.

It's not just a smart looker — Skoda's good-to-drive new Kodiaq is a serious contender for your money even if you were initially looking at more premium SUVs. Über-roomy, comfortable, highly-specced, versatile, and well priced both for the two-wheel and four-wheel drive versions (and with seven seats also an option), there's not a word you could say against it. ~ MotorBar