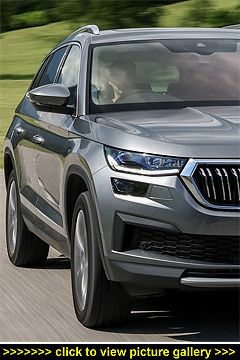 “While there is no single car made
that does absolutely everything
perfectly, there is one that comes
close — Skoda’s versatile, classy-
looking and good to drive seven-
seater SUV, the Kodiaq...”

SOME OF THE DRIVERS choosing a seven-seater SUV will be going down the larger SUV route because they must, their choice often driven by an expanding family. However, that's selling these big family-friendly SUVs short because the Kodiaq also strongly appeals to drivers who want acres of space and real comfort for five along with a massive boot. For them, the Kodiaq comes up trumps too: with the third row of two seats folded into the floor the Kodiaq's boot can swallow a massive 765 litres — it's hard to image needing more than that…

It's very gratifying, settling into the driver's seat. All the important boxes are ticked — and you're keenly aware of that from the moment you step aboard: lashings of room, big shapely chairs upholstered in tactile microsuede and leather, foolproof dash and ergonomics with a built-in touchscreen for the navigation and infotainment, and a commanding driving position and first-rate visibility from behind the heated multifunction wheel.

The Kodiaq is very well put together and classy in a tasteful, unshowy way, but its biggest selling point is its ease-of-use. Everything is exactly where you would expect to find it and, from switchgear to major controls, and it all works with a quality feel. Not only do the heated (three-stage), well bolstered, and supportive seats keep you comfortable on both the shortest and longest journeys, but setting your personal 'sweet spot' is a doddle thanks to smooth-working controls along with adjustable lumbar support and height-adjustable driver and front passenger seats and seatbelts.

And while you're sitting high looking down on other drivers, your hands cosy on the heated rim of the leather wrapped steering wheel, you'll still enjoy a good six inches of headroom. Shoulder, elbow, and leg room are all equally generous and the cabin wide enough for there to be a broad central armrest that can easily be shared without any elbow clashes.

Thanks to the first-rate driving position and visibility, positioning the Kodiaq in traffic or off-road is a no-brainer. Even reversing is a cinch courtesy of parking sensors front and rear and a rear-view camera plus short overhangs nose and tail. Of course, you can always do it the 'lazy man's' way by ticking the box for Skoda's Park Assist system which will steer your Kodiaq into a parallel or bay slot for you.

The Kodiaq comes well equipped for family duties; not just with its roomy accommodation but also with a plentiful number of well-considered in-cabin storage solutions starting with not one but two gloveboxes (both of a good size; the main one is chillable), a deep storage box beneath the central armrest with twin cupholders, big, long door bins that swallow bottles without pinching, deep drawers under both front seats, and a drop-down glasses case in the overhead panel housing the SOS button. Other welcome touches include the compact umbrellas 'holstered' in the front doors, ready to be quickly drawn whenever the weather turns wet.

Much appreciated too are the time-honoured 'physical' rotary knobs and switches for the two-zone climate control. For finger-tappers, the climate settings can also be shown and adjusted on-screen, so Kodiaq drivers get the best of both worlds. Adding to the ease of use are the foolproof steering-wheel controls (for the heated wheel rim, voice control, media, etc) all of which are clearly marked. The instrument panel is easy to read day and night with white-on-black dials either side of a multi-mode display with a large road-speed readout. If you want to see the active mapping between the dials you can always upgrade to a swish widescreen 10.25-inch digital 'Virtual Cockpit'.

Today, no self-respecting car can pass muster without a comprehensive set of comms. It may only be the mid-range trim, but the SE L is more than 'fit' in the comms department. The central Amundsen touchscreen is an eight-incher with integrated WiFi; it's a nice unit with fast responses, easy-to-read graphics, and 3D mapping for the SatNav. Its comprehensive skills set includes a connected multimedia system that makes it easy to communicate with friends and family, get the information you need, and keep you and all your passengers happy and entertained while you drive.

Apple CarPlay and Android Auto are part of the bundle, plus you also get Infotainment Online for accessing a whole host of stuff, from the weather to available parking spaces. Usually reserved for top-end trims, wireless smartphone charging (in a lidded tray/bed ahead of the selector lever along with a pair of the latest 'C' type USB jacks) is a standard-fit, as too is a DAB digital radio, eight speaker sound system, and eCall+ (should you have an accident, the Kodiaq automatically contacts a service centre or calls for emergency assistance). Remote access via your smartphone when you're away from your Kodiaq lets you determine, among other things, where your car is parked.

Apart from the five-seater entry-level model, all other Kodiaq trim levels come configured in a flexible seven-seat layout. Seats six and seven are best for teens and youngsters, who will have no problem climbing in and out of the third row — in fact, it's hard to keep them out; kids can't seem to get enough of 'em! That noted, adults can travel there occasionally (even in the third row there's still enough headroom). Grown-ups wanting to travel first class will be uber-comfortable in the second row.

The second-row seats slide backwards and forwards (the bases are split 60:40) so passengers in the middle row as well as those in the third row can customise their personal leg- and foot-room regardless of what their neighbour is doing. When the rearmost pair of individual seats are folded away into the boot floor, sliding the middle row seats also lets you max-out the boot space. Those carrying kids will also be glad of the pre-installed Isofix child seat mounting points on the outer seats (usefully, the same can be optioned for the front passenger seat).

Adults fortunate enough to be chauffeured around in a Kodiaq will enjoy superior views out wherever they are sitting thanks to the Kodiaq's high-riding SUV underpinnings and high-set seats. In the middle row these are as comfortably padded and supportive as those up front, and benefit from individual reclining backrests. There's also six inches of headroom, generous kneeroom, and masses of foot room.

Travel-enhancing refinements can be taken for granted: you'll find central air vents, large pouches on the front seatbacks, big bottle-holding door pockets, a well-padded, extra-wide, drop-down central armrest with built-in cupholders, and proper reading lights. All-in-all the Kodiaq provides a very civilised way of transporting five adults who need to arrive fresh and rested at a distant destination; it's equally competent when it's a small tribe of youngsters who need ferrying around.

Refinement comes engineered into the Kodiaq, and it's underscored by a passenger-friendly suspension set-up. The result is a quiet and relaxing interior environment that helps the miles pass you by almost unnoticed — unless you want to watch the world go by. In which case large windows and the commanding views from any of the passenger seats is a definite bonus.

SE L versions come with Drive mode select, which offers a range of driving styles: Eco, Normal, Sport, and Individual. Whichever you choose, the Kodiaq rides perfectly smoothly, keeping its occupants well cushioned from any blacktop unpleasantness despite rolling on 19-inch alloy wheels; it helps that the Pirelli tyres are of a comfort-enhancing 50-profile grade. The result is a ride that's exactly what a polished seven-seat family SUV should have.

The petrol-drinking 1.5-litre TSI in the SE L's engine bay pumps out 148bhp backed-up by a muscular 184lb ft of torque on call from 1,500 through to 3,500rpm. Its punch is delivered without any fuss and it's more than up to the job, courtesy of the smooth-shifting seven-speed twin-clutch autobox. You'll enjoy an effortless drive and the petrol powerplant is quiet around town, although ask it to pick up the pace and you'll find it's always willing — slot the selector into Sport and the Kodiaq really gets up and goes! Zero to 62mph takes 9.8 seconds and the 1.5 Kodiaq will run to 127mph. There are also paddle-shifters on the wheel for those times you may want to override the autobox's change points; when you're towing, for instance.

Overall the 1.5 offers an agreeable blend of punch and economy: officially the combined figure is 39.1mpg but a hard week's testing saw us post a real-life combined average of 38.4mpg. For a large SUV with an autobox and seven seats, we'd call that frugal. Emissions, if you want to know, are 164g/km.

Virtually the same length as the estate version of the Octavia — Skoda's bestselling super-practical family car — the taller Kodiaq nevertheless looks far bigger. Yet on the road the Kodiaq feels satisfyingly wieldy. Factor in its superior high-riding visibility and it's a breeze to manoeuvre in rush-hour town traffic or when you need to park up.

Outside the city limits the Kodiaq can he hustled along with confidence, its body movements well under control. Even more so if you've gone down the 4x4 route. Either way, its predictable roadholding is totally trustworthy so you can boot if it you like. However, you will get even more pleasure from driving it if you ease back on the loud pedal and just let it waft along in its own sweet unruffled way, and enjoy the ride.

These days every driver seems to want a hands-free powered tailgate. The Kodiaq gives you one. And most people want a bigger boot. The Kodiaq obliges — and very generously: with the third-row seats tucked away there's a massive 765 litres to play with.

Fold down the second row's backrests as well (they drop perfectly flat) and you have a gigantic 2,005 litres for cargo with a seamless loadbay floor that stretches all the way back to the tailgate — and no lip to load over either. And even with all seven seats in use there's still room behind the third row for some squashy bags or a trolley-full of shopping from Sainsbugs.

The boot/loadbay offers that extra bit of versatility with its three-way split (40:20:40) middle-row backrests; this also provides a very large and wide load-through feature. You also get a variable boot floor.

And there's more good news: the roller blind luggage cover cassette has its own dedicated spot under the boot floor — very few other brands do this, and consequently their roller blinds usually end up stored in their owner's garage or porch. Thankfully you can rely on Skoda to do the right thing. For the record the boot also contains sturdy adjustable bag hooks, a 12-volt socket, two boot lights, and three strong and stretchy luggage nets.

Fitted with the 150PS petrol-powered unit the Kodiaq will pull a braked 1,800kg. If you're only planning on the occasional spot of towing, then you might like to specify the optional electrically folding tow bar which can be neatly 'disappeared' when not required.

The Kodiaq is one of the most complete seven-seaters you can buy and not only won't it break 'your' bank but it's enjoyable to drive, comes with acres of space including a huge boot, and is generously specced and smartly fitted out. Go big with a Kodiaq and you'll find that Skoda's family-friendly SUV doesn't just talk the talk but walks the walk. Convincingly! ~ MotorBar