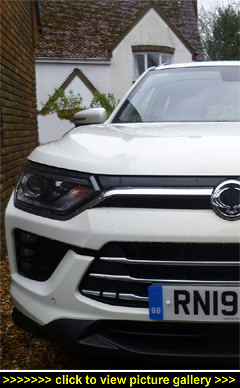 “For a decade Nissan’s Qashqai
has been the first choice for Brits
after a stylish, jacked-up soft-roader.
But, as Bob Dylan would tell you,
the times they are a’ changin’.
And it is compact 4x4 SUVs such as
SsangYong’s Korando that are
now muscling in and breaking the
old allegiances...”

SO IF YOU WANT FREEDOM to roam, gather around and heed the South Korean call, because times they truly are changing. With its pert chrome-trimmed nose the Korando's a pretty little thing with a purposeful stance. Visually striking from the front, it packs in some decisively creased character lines along its flanks on the way back to sleekly 'blistered' rear wings; the rear haunches, kicked-up C-pillars and bold, eye-catching horizontal LED rear light clusters all converge to form an attractive bespoilered tail.

And there are choices. Four trim levels and two engine options. That breaks down to ELX, Ventura, Pioneer, and Ultima specs; power-wise, the choice is between a 1.6 134bhp/238lb ft turbodiesel and a 1.5-litre GDI-Turbo petrol-drinker with 160bhp/206lb ft. Six-speed transmissions come in both auto and manual flavours but 4WD is only fitted to the higher-torque diesel units. If you're thinking 'green' then be advised that a battery-electric version with a 200+mile range is pencilled-in for early 2021.

The Korando's 4WD system and ample ground clearance makes it a persuasive performer off-road. If you want even more all-terrain expertise then you'll have to dig deep and move up to the next and significantly more expensive class of SUVs. But, really, you don't need to: Korando is a contraction of Korea Can Do. And, off road and on, it Can Do!

Swing open a door and you'll find a smart and well-crafted contemporary cabin waiting on you (once you're in the door shuts with a well-engineered 'thump'). There's plenty of tastefully-done piano black gloss finishing to the fascia, central console and doors and the eight-inch central touchscreen is, in the Pioneer model, for infotainment (if you want built-in navigation and a swish virtual cockpit treatment you'll have to step up to the range-topping Ultima trim).

That's not to say the Pioneer's instrument panel is not perfectly fit-for-purpose because it is; the dials sport sharp numerals and the posted speed limit is clearly shown close to the large digital roadspeed read-out. Apple CarPlay and Google Android Auto are on hand for smartphone interfacing along with Bluetooth hands-free, a DAB radio, and an SOS assistance button just in case.

The interior is fitted out with some accommodating seats upholstered in faux-leather with fabric centre panels — with three-stage heating, they proved to be extremely comfortable both around the houses and on extended staycation trips. Personal space is generous with a fist-and-a-half of headroom and plenty more around the shoulders and elbows (the wide slide-adjustable armrest between the front chairs is very shareable) and the bolstering is effective without being pushy.

And because you sit commandingly high, the views out over the bonnet and to the sides are clear and informative (visibility through the rear screen and door mirrors is also excellent). If you do venture into the rough you'll be glad of it when skirting around rocky obstacles and snaking through wooded slopes.

Steering is via a good-to-use multifunction wheel with a slightly flat-bottomed rim that's also heated (wheel-mounted controls are clearly marked and cover voice, cruise, speed limiter, driver's trip, and audio). Power windows are standard (the driver gets one-shot-down op), the door mirrors power-fold on demand, and there's an electric parking brake with auto-hold. Also a boon for dealing with summer glare and low winter sun are the width-extendable sun visors. You'll also be glad of the knee-friendly footwells and comfy left-footrest.

Storage is definitely family-grade with space in the real-world door pockets for a large and a small bottle of water, a long glovebox that can swallow an iPad, a big, deep bin under the sliding front armrest, dual siamesed cupholders, an angled open tray at the base of the centre stack (with USB and 12v power sockets) that's perfect for oddments or your smartphone (its angled down so your phone won't jump out at the first corner!), and a drop-down holder for your shades.

A five-star EuroNCAP rating is backed up by a comprehensive suite of safety assists led by forward collision warning (with pedestrian awareness) plus autonomous emergency braking. Added to that is lane-keep assist, lane departure warning, front vehicle start alert (warns when you're stopped in traffic and the vehicle ahead moves off), safety distance alert, auto-switching between main and dipped beams to enable maximum night-time visibility without dazzling other road users, traffic sign recognition with on-screen warnings, driver attention alert, emergency stop signalling (saves having to reach for the hazard when you're forced to stop unexpectedly), electronic stability and traction control, and active roll-over protection. The daytime running lights are LED, as too are the front fogs and tail lights.

To all of the above you can add convenience features such as tinted glass, front and rear parking sensors with a rear-view camera, hill-start assist, cruise control, speed limiter, auto lights and wipes, drive-off auto door locking, tyre pressure monitoring, and height-adjustable front belts. Naturally there's also a full complement of airbags front and rear plus some unexpected, but welcome, items such as a lower windscreen wiper de-icer and a solar and noise-control windscreen.

Even lanky passengers consigned to the back cab will be content thanks to more than a fist of headroom, decent knee-room and space for three pairs of feet side-by-side — so they can really stretch those legs out. The seatbacks are nicely raked and relaxing and the seats well-padded with comfy headrests and a wide drop-down centre armrest with twin cupholders. Pouches on both front seatbacks combined with bottle-holding door bins almost a big as those in the front doors help make for a clutter-free space for some serious chilling-out. For people-watchers, the uninterrupted views out are perfect. Isofix mountings permit child-seats in both outer positions and the easy entry and exit ensure taxiing the kids to school is a duty you won't find reasons to shirk.

Ridin' around mean city streets is something you'll be happy to do in a Korando — even the more intimidating speed humps are crossed without triggering Armageddon and combined with the quiet and refined cabin atmosphere it's all very laid back given the firmness at the tail to facilitate fairly hardcore towing.

A rigid bodyshell is underpinned by a MacPherson front/independent multi-link rear suspension set-up, enhanced by decent damping that together combines to deliver confident roadholding. Feel free to sling the Korando around if you must — there are no unpleasant surprises waiting and the nicely weighted steering remains faithful even if you're over-exuberant diving into a corner. Overall it's a very well behaved beastie, plus you can rely on the progressive and powerful brakes (discs at each corner; vented up front) to shed speed without any drama. On the motorway its safely 'planted' feel is doubly reassuring.

Aft of the selector lever you'll find a rotary knob for the Korando's 4X4 system. All you really need to know is that it's very much fit-for-purpose and will take you beyond green-laning. Off-road approach, departure, and ramp and angles are, respectively, 18, 24.5, and 15.4 degrees, plus there's a hill descent assist to take the fear out of descending tricksy inclines.

The 134bhp 1.6-litre diesel is a good fit with the Korando, not least because its 238lb ft of torque is well up to towing a trailer, caravan or horse-box — especially when harnessed to SsangYong's six-speed autobox. It's smooth and on the ball for shifts but if you want to take full control you can courtesy of the paddle-shifters on the steering wheel (there's also a Sport mode and a Winter setting for reined-in pull-aways on slippery surfaces).

The oil-burning soundtrack is agreeable but well muted and on quicker main roads and in the cruise on motorways it sounds far, far away. Top speed is 112mph while the benchmark 0-60 dash is despatched in twelve seconds dead. Officially, the combined fuel consumption is stated as 41.5mpg but a hard-driven week saw us record a not-to-be-sniffed-at 40.8mpg.

All models bar the Pioneer feature 551 litres of boot space — which is more than most in this segment. Folding down the rear seatbacks extends this to 1,248 litres. However, the Pioneer spec offers only 407 litres with the rear seats raised and 1,104 litres in loadbay mode. The reason is the full-size spare wheel — at 225/60 x 17" it hogs the boot's deep basement. Without the spare and the surrounding storage bins it reverts to 551 litres and also lets you section the boot into two separate areas using a lift-out floor section as a side-to-side divider. That noted, those expecting to leave civilisation behind to visit out-of-the-way spots will gladly accept this trade-off because a puncture or damaged sidewall far from the tarmac could leave you as stranded as Robinson Crusoe.

When it comes to loading there are no downsides: the tailgate rises high; there's no lip to lift over; the 60:40-split rear seatbacks fold flat, and in loadbay layout the entire floor length is seamless and level. The rollerblind load-cover has a fast-operating action plus there are nets to keep your stuff in situ. Finally, traileristas and other towing folk will be pleased to hear that this latest Korando will haul as much as a braked 2,000kg.

What a lot you get: smart looks, well-equipped cabin, room for a family with loads of space in the back, genuine cross-country ability, plenty of muscle for towing, and prices kicking off from Ł20K. All that and SsangYong's seven-year/150,000-mile warranty. But most important of all is the Korando's ability to dovetail perfectly with your everyday life — after a week's hard testing we were very, very reluctant to hand it back. ~ MotorBar