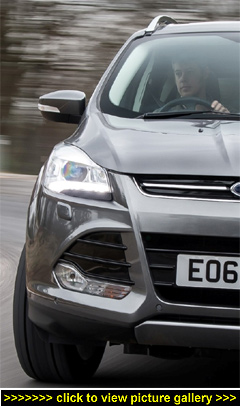 “There are twenty models in Ford’s
latest, bolder-looking Kuga mid-sized
SUV range and this huge line-up is
priced from Ł20,995 to Ł33,530. And
it now comes with petrol power...”

TO PUT THE SIZE of the Kuga into context, its competitors include the current best-selling, mid-sized SUV/crossover — the Nissan Qashqai. Other rivals are numerous and include the Hyundai ix35, Kia Sportage, Suzuki Vitara, Mitsubishi ASX, VW Tiguan, and Skoda Yeti.

And the above shortlist only covers the 'medium' sector of the huge-selling SUV/4x4/crossover segment which has models in small, medium and large sizes to suit every requirement and most pockets.

Just so you know, the Kuga is a five-door, five-seater SUV with higher than usual ground clearance than the Ford Focus which uses the same platform. This is of real benefit for the Kuga because it handles very precisely, it's agile, and its steering is sharp and responsive — just like the Focus, in fact.

The Kuga's extra ground clearance and overall height does, as you'd perhaps expect, generate slightly more body roll during high-speed cornering than its best-selling hatchback Focus stablemate. That noted, at cruising speeds the Kuga's ride comfort is probably the best in this sector. The suspension is generally compliant and only firm-ish at low speeds but road noise roar intrudes conspicuously into the cabin. This was most pronounced over coarser or damaged road surfaces so the larger 18-inch wheels might contribute to this problem.

As for the interior, in its medium sector the Kuga is relatively roomy with large windows so visibility is good. In the back, leg and shoulder room is also good — plus the Titanium X models have foldaway picnic trays so, along with useful oddment storage areas, it's definitely family-friendly.

That said, the boot is not so large — just 406 litres with the three rear seats in use although with them folded this quadruples to 1,603 litres. However, it will tow a braked 2,000kg.

Back in the front cabin, the fascia panel houses easy-to-read dials and instruments with the usual Ford steering column stalks.

Not so orderly is the upper centre console which follows the style of the Fiesta and Focus and is a mass of non-logical buttons operating the radio and SatNav. It really is a muddle and not at all easy or intuitive to use — and is something which is often criticised. Not only that but the infotainment screen is relatively small and recessed too far back into the fascia panel — and noticeably out of step with other car-makers' uncluttered designs.

When it comes to the engine's performance, the downsizing from the previous 1.6-litre four-pot petrol engine to the new 1.5-litre, four-cylinder EcoBoost direct injection turboed unit shows a 7% improvement in fuel economy and CO2 emissions.

Power output is the same, at 150hp with torque of 240Nm from just 1,600rpm. Due to longer gearing this requires more use of the gearbox on winding country roads to keep the engine in its optimum powerband. So it's a good thing that the six-speed manual gearbox is slick and precise to use. But it does require changes from sixth down to fourth gear at times to keep the vehicle moving along.

On the open road acceleration is brisk and once at cruising speed the engine holds sixth gear well enough.

The gearchange prompts are confusing because if you slavishly act on them you find that frequently up-changes are often immediately followed by suggestions to drop back down a gear! Blame this on the engine control unit's constant effort to deliver the best official EU6 CO2 emission figure rather than optimum driveability.

The 1.5 EcoBoost petrol-powered model will officially return 45.6mpg in the Combined Cycle and during my week-long driving period on motorways, A/B roads and some shorter stop-start commuter trips, the figure was a disappointing 36.2mpg. I only say disappointing because the official EU laboratory-achieved figure is unrealistically high.

Overall the latest Kuga, with its wide range of engine/trim options, is well targeted to appeal to a broad spectrum of owners. Overall it's a well-rounded, user-friendly mid-sized SUV that benefits from sharp and precise handling allied to a comfortable ride. Just the job! — David Miles