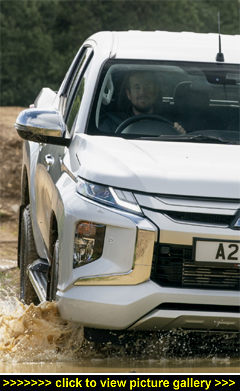 “Go ahead, make my day! With a
name like Barbarian X you just know
it’s gonna be in your face as much
as Dirty Harry’s ·44 Magnum...”

THERE'S PLENTY OF visual Sudden Impact about Mitsubishi's 'hard-man' pick-up — from the moment you first catch sight of its forcefully blunt nose, slim LED headlamps that remind you of a gunfighter's eyes as he strides to a high noon showdown, snaking horns of gleaming chrome corralling the deep grille, and deep pods housing stacked indicators and fog lamps, this is one mean hombre.

The cabin features plenty of leather — not surprising given that the Barbarian X sits on the top rung of the L200 trim ladder. Most striking are the X's bespoke 'six-pack' suede centre panels edged by effective side bolstering on the sporty-looking, well-padded, and supportive leather seats. The fist-and-a-half of front headroom and boot-friendly footwells also go down a treat, as too does the power-adjustable driver's seat and the seriously commanding driving position with full four-corner visibility.

Mood lighting along with smart dash brightwork boosts the plush upscale look while the driver is further pampered with a heated steering-wheel (a multifunction four-spoke item with a good-to-grip perforated leather rim). A wide, for-two-to-share padded suede central armrest caps a deep storage bin plus there are large bottle- holding front door pockets, a real-world glovebox, siamesed dual-use cupholders, and a drop-down case for your shades.

Talking of comms, the Barbarian X covers all the key bases although some owners will miss not having a built-in SatNav. That noted, many smartphone-addicted drivers prefer to use their favourite navi-apps and for them there's Apple CarPlay and Android Auto mirroring. More good news: a generous supply of USB ports along with an HDMI input, Bluetooth with music streaming, and a DAB digital radio.

Equally useful, and making night-time driving infinitely more relaxing, is automatic Main/Dip beam switching plus LED headlights with auto levelling, LED high beams (daytime running lights are also LED). And when the foul weather rolls in there's always the Super Select four-wheel drive, selected with a quick twist of the rotary control knob behind the selector lever for on-the-fly switching between front-wheel drive (2H) and all-wheel drive (4H) at speeds of up to 62mph.

Rear passengers will be surprised at how comfy the back seat of a pick-up can be. Spacious too. Side-steps, full-opening doors along with grab handles (both overhead and on the B-pillars) make getting up into the rear cabin a doddle for seven- to seventy-year-olds.

Three side-by-side is doable and you sit about six inches higher than those up front so views out are good and if you like the wind on your face you'll be pleased to know that the large window glasses drop fully down into the doors. A well-padded centre armrest with built-in twin-cupholders and bottle-holding door pockets along with large pouches on the front seatbacks will also be appreciated, as too will the liveable foot, knee and headroom, two child seat mountings and pair of USB jacks.

The body-on-frame construction used to provide maximum robustness on pick-up trucks can make for some body jiggling and bounciness, especially when unladen. However, the L200 has this well under control thanks to a supple suspension set-up and tall-sidewalled (60 profile, 265 width 18-inch Dunlop tyres) that between them help accommodate surface upsets and make the Barbarian drive more like an SUV. Aided by comfortable seats, it rides around town surprisingly smoothly and even driving over lumpy blacktop isn't a ride-breaker. Once settled into its relaxing motorway gait, it's a laid-back cruiser, one that's unexpectedly muted with tyre, road and wind noise all well suppressed.

Power for the Barbarian doesn't come out of the barrel of a ·44 but from a new 2.2-litre turbodiesel. Thumb the starter button and the four-pot fires up instantly, ready to deliver 148bhp along with 295lb ft of torque from 1,750rpm — enough to take it to 106mph and put the 0-62mph 'sprint' to bed in 13.5 seconds.

The official combined consumption is 29.1mpg. Easily confirming that, we recorded a 30.1mpg average over the course of a hard-pressed week; not at all bad for such a hefty all-wheel drive truck. Orchestrating the gear-shifting in 'our' test Barbie was a six-speed autobox; DIY-ers can, should they wish, specify a six-ratio manual stick-shift.

The selector lever flicks easily through the gate to its Drive position where it can be left to look after business for you, or nudged to the right into the box's manual mode and tapped fore-and-aft for driver-dictated shifts; alternately, gear changes can be made using paddle-shifters on the steering column. Moving off is smooth and so too is pootling around in heavy traffic with minimal noise from under the clamshell bonnet.

Cruising in with fast-moving traffic on dual carriageways and motorways is pretty relaxing — you feel that you're behind the wheel of a car rather than a pick-up that can tow three-and-a-half tonnes.

Given that this is a pick-up and not a Sports Ute, the L200 handles reassuringly; the power steering is nicely weighted and sharper than you might be expecting, grip is sure, and body control well managed; add to that the L200's inbuilt bias towards safe understeer and you can hustle along back roads with confidence.

Off-road its separate-chassis construction, underpinned by a no-nonsense suspension set-up (independent at the front; leaf-sprung live axle at the rear) plus four-wheel drive, gives it more capability than many a SUV — whereas a hard drive over off-the-grid terrain can make quite a mess of a Ł100,000 SUV, a serious mud-plugger like the Barbie can better roll with the punches.

Armed with its electronically-controlled four-wheel drive (supplemented by an effective Hill Descent Control system) the Barbie shows off a wide repertoire of abilities, from a 600mm wading depth to coping in tricksy muddy conditions — unless you've personally faced it, few drivers realise that deep mud can be every bit as treacherous as ice and snow.

While pick-ups don't have a proper boot as such, the Barbarian's roller blind puts a lid on the loadbed to create a large all-purpose luggage bay. It's lockable too and facilitates hassle-free loading and unloading over the sides (helped by the side-steps) despite the rugged squared-off wheelarches that together with contemporary LED taillights beef up the L200's tough-looking rear haunches.

Top-spec models such as the Barbarian X are unlikely to see the dirty side of a construction site; but that doesn't mean they can't handle normal pick-up duties. The L200's loadbed has a competitive maximum payload of 1,075kg and its braked towing ability is now 3.5 tonnes. Caravan and trailer towing are core duties for the L200, and on that front the Barbarian delivers in spades.

A damped 'soft opening' tailgate makes light work of managing serious cargo and looks manly enough to support a sumo wrestler while the über-tough load liner will take whatever you throw at and in it. There's also a strong bumper step that will bear your full weight without flexing.

Mitsubishi's tough and reliable L200 pick-up trucks have been both an ongoing success and a mainstay of the Japanese 4x4/SUV brand in the UK for many years. Now backed by a generous five-year warranty, this handsome statement-making and family- and lifestyle-orientated sixth-gen version has been improved every which way and clearly it's here to stay! ~ MotorBar