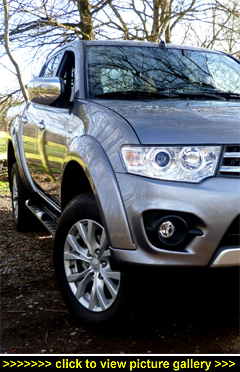 “Thinking about a pick-up for
what insurers used to call ‘Social,
Domestic and Pleasure’ use?
If so, Mitsubishi’s L200 range
should definitely be on your radar,
particularly as they now come
with the longest warranty of any
pickup truck in the UK — five
years or 125,000 miles...”

As it happens the L200 was also the first to introduce car-like driving characteristics to the heavy-duty vehicle sector and the first to use power-assisted rack and pinion steering, and electronic traction control.

They're popular with people who like to tow their own boat, his 'n' hers jet-skis, caravan or horse-box at the weekend. Alongside strong and sustained commercial growth, these lifestyle sector sales have helped keep the L200 up there in the best-selling pickup lists. And now Mitsubishi have added the extra value-for-money Challenger to the line-up.

The four-door, five-seater Double Cab variant is the one most likely to be on private motorists' shortlists. In case you're thinking that going recreational means loosing out on car-like performance, note that the Challenger, powered by a 2.5-litre turbodiesel putting out 172bhp and 295lb ft of torque from 2,000rpm, will get you to the benchmark 62mph from standstill in a quicker-than-you'd-guess 12.1 seconds.

Despite being capable of unstinting hard work 24/7, the turbodiesel is no more than a distant yet reassuring rumble at the legal limit, which calls for an unruffled 2,400rpm; at which point pressing firmly on the accelerator results in strong pickup, even when left in 5th gear, so overtaking is not an issue. Generally speaking, once you're on the motorway you can slot it in top gear and leave it there until you come off. Maximum speed is 111mph.

And for a 'workhorse', the combined official mpg figure is also better than expected — at 35.8mpg (30.7 town; 39.2 touring). CO2 emissions are 208g/km. On test our Challenger (brand new with just a few hundred miles on the clock) averaged 30.7mpg — with a full tank that's good enough to last around 420 miles.

The standard-fit five-speeder manual 'box is an easy-changer, designed to enable the Challenger to make light work of towing (a braked 3,000kg), hauling one-tonne payloads in its long load bed, off-road driving, and just about any other job you might care to task it with.

From outside it may look as though it's a pin-up for the likes of Mad Max but open the door and the Challenger's cabin goes beyond anything you'll find in the Thunderdome. It's an easy 'in'. Pull the chromed, glove-friendly door handle and swing open the door — the seat base is set at an ideal height to 'sit and swivel' yourself inside behind the wheel. There are non-slip side-steps for kids not yet tall enough to do the sit 'n' swivel thing.

You'll find two sturdy levers alongside your left knee: a normal gearlever for the five-speeder (with reverse conveniently found in the '6th' position) and a shorter one to operate the transfer 'box, which provides four settings that make the Challenger as much at home on tarmac as it is off it — and in all weather conditions. A graphic in the fuel/temp gauge permanently shows the currently active mode.

Generally favoured for everyday blacktop motoring is high-ratio rear-wheel drive (2H). However, if on-road driving conditions deteriorate and you want the security of full-time four-wheel drive you can shift between 2H and 4H on the fly at speeds up to 62mph.

For driving over rough, sand, or snow-covered roads there's 4HLc — high-range four-wheel drive but with the centre differential engaged. This, like the low-range 4LLc, is not for use on dry paved roads and highways.

Four-wheel drive in low-range with the centre differential locked (4LLc) is for driving up or down steep hills at very low speeds or for going through deep snow, mud or sand, especially when maximum torque is required. Shifting into or out of 4LLc can only be done with the Challenger stopped.

Back in the cabin, switchgear is logically arranged with large rotary knobs for the climate control. A driver's display for the essential readouts (range, mpg and external temperature as well as elevation, barometer readings and a compass) are always in sight on the screen inset top-centre of the dash. A nice detail is the smart ribbed satin black 'skin' stretched across the top of the fascia — and it's temptingly tactile.

Storage is well addressed with a useful flip-up lidded tray ahead of the gear lever, while the big, deep glovebox opens almost like a filing cabinet drawer so that its contents are easy to sort though without having to rake everything out. Nice. A drop down glasses case is provided and there are the now-obligatory cupholders. More oddments room is to hand in the deep bin under the centre armrest, which offers extra storage in its padded lid. Door pockets are slim but the front section is shaped to hold a bottle.

Front occupants get height-adjustable belts and a generous elbow-gap between the seats. The driver's chair gets height adjustment and while the three-spoke leather-rimmed wheel is only tilt-adjustable there's ample seat adjustment to set a decent driving position. The seats are large and accommodating and there's a fist of headroom plus an abundance of legroom and space for boot-wearing feet. For the record, cruise control is operated by the buttons on the wheel's right-hand horizontal spoke.

Hopefully few owners will get to test the Challenger's seats for comfort in the same way we did — being stuck on the M23 for over four hours due to a multi-vehicle pile-up. However, even being confined to our seats for that long wasn't a physical hardship and when we were finally allowed on our way there were no aches or pains from the experience. Says a lot, doesn't it?

Getting into the back is as effortless as climbing into the front; riding in the rear cab is much more enjoyable than in many cars thanks to the elevated seating position and excellent views out in all directions.

Headroom is fine, even when occupying the 'middle' position; as too is the foot room. Two well-built adults can travel in a much civilised manner in the back, relaxing against the angled seatback while amiably sharing a well-padded centre armrest with large built- in cupholders. The door pockets also hold a can or bottle for those who prefer their tipple packaged that way.

Three rear headrests are standard and three grown-ups can fit side by side on the padded bench. If you're driving solo or with a single passenger up front you might like to remove the three rear headrests (they lift out very easily) and store them under the front seats because the view rearwards through the upright back screen is then as good as it gets. And very good that is too!

A four-star Euro NCAP safety rating and ABS with EBD, driver and passenger airbags, and Mitsubishi's Active Stability and Traction Control (M-ASTC), as well as on-demand four-wheel drive, can all be taken for granted.

M-ASTC is an active stability control feature that can detect unstable movement, such as lateral slippage. If slippage occurs, the stability control function automatically controls the brakes and engine output to stabilise the L200; and if the sensors detect wheel slip when starting on slick surfaces, such as a snow-covered road, the traction control function automatically brakes the slipping wheel.

With no reversing sensors (a rear camera is available as an option) and a 5.185-metre length there's a lot of metal behind you. Thankfully, with all four of the Challenger's 'corners' visible from the driver's seat, reversing or parking is not the nerve-racking experience you might at first imagine. A few trips to your local superstore car park is all it takes to acclimatise.

While there's no boot, you do get the accommodating load deck — adding weatherproofing and security is simply a matter of ticking the appropriate box on the extensive personalisation options list that offers a variety of gas-lifted aluminium 'lids', soft and rigid tonneaus, and several smart, full-blown hardtops.

Riding on a tough ladder frame chassis with a dynamic front suspension system (based on the Shogun's set-up of coil springs and independent double wishbones) allied to a no-nonsense leaf spring rear suspension that ensures a one-tonne payload can be safely supported — be it commercial or family cargo — the Challenger will get you places where you didn't know there were places!

On the move it imparts a rugged feel that encourages a 'Ute' driving style — driver's window down and a gentle breeze ruffling your hair. If you like fresh air you can always power down the centre section of the rear screen — great on hot days; and your four-legged 'best friend' will love you all the more for it!

The Challenger has an unexpectedly easygoing ride; set up to manage all sorts of surfaces, rolling over potholed urban blacktop is no hardship. But that doesn't mean you can fly over speed humps! The power-assisted steering is fine — in fact the turning circle is class-leading.

At the risk of stating the blindingly obvious, the Challenger is no BMW i8 sports car; but you can press on, although with a stiff rear suspension designed to cope with heavy loads it's more serene with some weight in the back.

Ownership peace of mind comes in the form of a five-year/125,000-mile warranty that additionally covers against corrosion perforation for 12 years. Mitsubishi also throws its own Assistance Package which includes 24/7 UK home and roadside breakdown assistance, and European roadside assistance in over 30 European countries. A three-year fixed-price service plan is also available, for Ł720.

Reliable, robust and right-on, the Challenger isn't just for hefting lifestyle 'boys toys'; it's also the perfect accompaniment for the go-anywhere family. And as a school-run warrior, it's fearless! — MotorBar