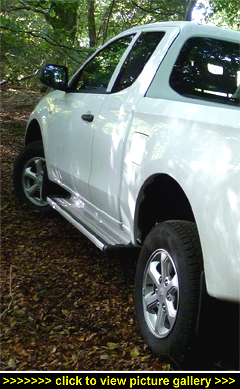 “Pick-ups continue to be a big hit
with lifestyle owners with a penchant
for towing. And the Club Cab
version of Mitsubishi’s latest —
the all-new fifth generation L200 —
does everything right when it
comes to ‘pulling’...”

THERE'S SOMETHING ABOUT A PICK-UP… maybe it's their role in countless movies, being driven by the likes of a wrathful, gun-toting Arnie. Or simply their go-anywhere looks and 4x4 abilities that endow them with SAS-like survival skills in any terrain. Not that you have to live in the Badlands to benefit, particularly as the top-spec pick-ups are now virtually as socially-savvy as many SUVs.

Long gone, too, are the days of bone-shaking suspension and utilitarian cabins — if you haven't climbed up behind the wheel of a pick-up for a while you'll be pleasantly surprised at the user-friendliness of today's models.

While it's the latest in a long line of pick-ups, the Series 5 is an entirely new vehicle from the ground up, as underscored by significant improvements in 330 areas over the much-respected Series 4, including refinement and dynamic performance.

Take this new Series 5 'Club Cab' — if you're not up to speed with the various cab styles, it means that although it gets four doors like a double cab, its rear side doors are only half-width; but that's still more versatile than a single cab with a mere two doors.

In practice it's a configuration that works really well as you get a longer loadbay behind the cab than with the most popular lifestyle-user choice — the Double Cab — but you can still carry passengers and gear that you don't want exposed to the weather (or light fingers) in the open-to-the-elements loadbed. More carrying options are possible thanks to a front passenger backrest that tilts all the way back until it's flat.

Inside the Club Cab it's no different from any other car cabin despite the fact that it's designed with function and hard labour in mind. That said, not all cars give you a fist of headroom and deep sun visors that really do let you drive safely into the sun or a large lockable glovebox. A pair of traditional dials show speed and revs; between them sits a trip info display. You'll also find audio and phone operation remote control buttons on the leather-wrapped steering wheel.

The driver gets a height-adjustable seat and both well-padded seats will comfortably accommodate larger body sizes, and the smart-looking two-tone black-and-dark grey cloth upholstery will be as pleasant on cold winter days as it is on hot sunny ones — we had no complaints over five hundred test miles.

The combination of sitting higher than normal with a good driving position (you can see down and over the bonnet as well as seeing the top rear corners of the loadbed) makes it easy to place the Club Cab whether you're threading along a tight off-road track or parking up in your local superstore.

As per any regular passenger car the Club Cab's got all the essentials such as power windows (with one-shot up/down for the driver), an efficient AirCon system, tinted glass, radio/CD player, USB connectivity, and Bluetooth with music streaming along with other convenience items such as central locking, power steering, adjustable lumber support on both front seats, a padded centre armrest capping a large, deep storage box, height-adjustable seatbelts and cupholders. There's also driver and passenger airbags, Hill Start Assist, Trailer Stability Assist and an active stability and traction control system.

Adding to 'the look' are silver side steps but they're not essential because getting in and out through the large front doors is easy with sturdy grab handles on the screen pillars, although for first-time rear passengers actually finding the rear door handles could be a challenge — the Club Cab's rear half-width doors are rear-hinged so open at their front edges (so-called 'suicide doors' and in principle no different from those you'll find on a current Rolls-Royce).

However, for safety reasons the rear doors cannot be opened until the same-side front door is opened and then only by using the handle that's on the inside.

In use it's all very straightforward and offers a handy load area for lifestyle 'gear' when you're not carrying two passengers in the second row.

Access to the rear cabin for passengers or for loading is easy through the wide-opening (to 90-degrees) rear half-doors.

A pair of individual bench seats and well-padded headrests offer room for near-six-footers travelling behind similarly-sized others up front, and with good foot room under the front seats. It might be a bit too 'knees-up' for some grown-ups, but it's fine for kids who will no doubt also make good use of the bottle-holding door bins.

Go for the Club Cab 4Life model and it's Hobson's choice in the engine department: like it or not (don't worry, you'll like it!) you get Mitsubishi's 151bhp 2.4-litre turbodiesel and it's mated to a precise six-speed manual 'box with an easy throw.

It's a nice, unexpectedly thoroughbred motor in what for many owners will be their everyday workhorse — a high-tech common-rail turbodiesel with variable valve-timing that generates a heavyweight 280lb ft of torque delivered between 1,500 and 2,500rpm. You only really notice its 'voice' under foot-to-the-floor acceleration and even then the hard growl goes very much with the image. However, even though it's agreeably quiet inside the cabin at the legal limit you'll barely notice it working as the Club Cab lopes along. At the top end, the 2.4 delivers plenty of in-gear pick-up in fifth and sixth for laid-back overtaking on the motorway.

And if you think its macho, planted stance means some rough riding is in store then you'd be mistaken — the L200 Club Cab is no Bucking Bronco and while you enjoy an elevated seating position and all the visibility benefits that come from it, the ride on the average blacktop is both composed and SUV-like.

Going off the beaten track? Mitsubishi's Easy Select system, which incorporates a locking rear differential, offers the driver a choice between two-wheel drive and four-wheel drive, as well as low-range all-wheel drive — all easily selected electronically using the rotary selector knob between the gearlever and sturdy traditional-style handbrake on the centre tunnel.

Under the torsionally stronger body is a reinforced chassis and a revised heavy-duty, long-travel suspension set-up that's designed to deliver manoeuvrability off-road; there's also 200mm of ground clearance and a proper metal sump-guard that along with effective approach, departure and breakover angles means the L200's motto off-road is unflinchingly 'can do'.

On the blacktop, and in spite of measuring 5.2 metres from nose to tail, the Club Cab feels game. Body lean is well reined-in, the steering is light but precise (yet feels steadfast around the straight ahead when tracking down motorways), and the stability and traction control system is discreetly active keeping everything shipshape. Overall the L200 feels much more responsive than its pick-up genes would lead you to expect, and it's as easygoing around mean city streets as it is up to its axles in mud.

The low-range 4WD mode is also perfect for going downhill off-road — select first gear, take your feet off, and the torquey engine and low-range will take you all the way to the bottom at a reassuringly controlled pace.

While most pick-ups used for dual-role lifestyle duties are usually top-of-the-range Double Cab models, the less costly Club Cab represents a good deal that really can cut it as 'wheels' for an active family. ~ MotorBar