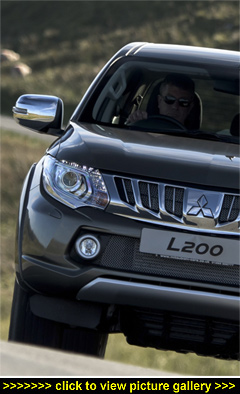 NOT SO LONG AGO DRIVING a pick-up, especially as a 'lifestyle' choice, involved some hard compromises — such as the ride quality. Not anymore. With its roomy, well-appointed double cabin, on-demand all-wheel drive and commanding driving position, this latest fifth-generation L200 really is a civilised beastie.

Looks-wise it's been restyled from nose to tail. Muscular, but not muscle-bound, seen from the front it could be a fashionable high-riding SUV. There's plenty of glitter from the chrome jewellery it wears around its neck but it's applied in tasteful moderation, and the paintwork gleams as much as what you'd expect on a high-end sportscar.

Open a front door and climb aboard. Sturdy side steps and strategically-sited grab handles on the A-pillars are there should you need them, but actually it's very easy — courtesy of the large door apertures and a well-set seat base — to park your butt and swivel in your legs in one fluid movement.

If you've jumped in the driver's side you'll find your hands making themselves at home on the leather rim of a three-spoke multifunction wheel (voice, phone, and cruise) with paddle-shifters for the five-speed autobox.

Had you ever sat inside this fifth- generation's predecessor you'll also notice the massive step-up in cabin quality and ambiance — not that there was much wrong with the previous L200, it's just that this fifth-gen cabin is so right.

Car-like? Absolutely! Better still, sitting behind the wheel in Mitsubishi's pick-up you'll enjoy a commanding driving position enhanced by first class visibility in all directions — superior to any car. The instrument pack and driver's information display is clear, and supplemented to its left by an equally sharp infotainment touchscreen with 3D SatNav mapping that delivers well-timed spoken directions and accepts full postcode destination entries — something quite a lot still don't.

The leather-covered seats are large and accommodating with two-stage heating and are separated by a large armrest ideal for sharing. Beneath it you'll find a sizeable, deep storage bin; thoughtful touches include a damped glovebox lid that opens gently without crashing down on your knees and handy bag hooks on the front seat head restraints. The driver's seat is power-operated, as too are all the windows and powerfold door mirrors (on demand and automatically when locking and leaving).

Most appreciated of all though is the amount of head, shoulder and elbow room. Lower down there's plenty of space in the footwell for boot-wearing feet along with a usable rest for your clutch foot — and there's even an airbag to keep your knees safe in an accident.

The selector lever features a safety-orientated zigzag-pattern gate but whenever you prefer to take personal control for the gear shifts you can just flick the shifter into Sport mode and use it as a manual or, more conveniently, finger-tap the paddles.

Close to the gearlever and traditional handbrake is a rotary selector to dial up the most appropriate driving mode; from high ratio two- or four-wheel drive to high or low all-wheel drive with a locked diff (a graphic display on the dash keeps you informed of the currently active driving mode).

The L200's rear cabin is spacious with ample room for two six-footers sitting behind another adult pair. Additionally there's loads of space for knees and feet with decent headroom. The backrest is set at a relaxing 25-degree angle with a padded centre armrest incorporating built-in cupholders and with the armrest stowed away a third grown-up can travel between two other passengers.

Beneath the L200's sharply-sculpted bonnet sits a 2.4-litre turbodiesel unit. A world-first for a pick-up, its lightweight all-aluminium engine, helped by variable valve timing, puts out 178bhp and a hefty 317lb ft of torque at 2,500rpm. You can have a six-speed stick shift but the autobox with wheel-mounted paddle-shifters is a sweet little number — and it doesn't hurt fuel consumption either.

Officially it will average 39.2mpg — a week's hard driving over mixed roads saw our test car return 38.7mpg. Impressive for a 4WD with automatic transmission anything, let alone a pick-up. If you don't like stopping to refuel then you'll be pleased to kmow that the L200 has the largest range in its class: it can travel 685 miles on a full tank of fuel.

The new four-cylinder turbodiesel engine and five-speed automatic transmission is a well-judged partnership: keep your foot down and it'll clock 62mph from standstill in 11.8 seconds and top out at 109mph.

Prodding the accelerator hard liberates a likeable gruff roar (and never becoming harsh even as the rev-counter needle closes on the red-line); for most of the time you really don't notice what's going on mechanically as power flows smoothly up and down the rev-band.

While 'macho' is a term readily associated with pick-ups, anybody can leap in and drive Mitsubishi's latest L200 pick-up — ask your Grandmother! Given its 5.3-metre length, it feels smaller on the road than it actually is and thanks to a car park-friendly turning circle it's an easy steer around town and you won't need to spend time pumping iron before you can take the helm.

There's more than one 'R' to Mitsubishi's pick-up: alongside 'rugged' there's also 'refined' and, as already mentioned, it's quiet cruising at speed but the ride too is satisfyingly compliant and the L200 is unexpectedly smooth over tarmac with good cornering body control.

A turn of the Super Select 4WD dial allows the driver to go from rear-wheel drive to four-wheel drive at any speed up to 62mph — for the record, it's also the only pick-up that can be driven permanently in 2WD and 4WD on tarmac and off-road. For extra stability in all-wheel drive the torque split to the wheels is biased 40:60 to the back axle. And when the going gets tough you can call on both high and low 4WD ranges with the diff locked for max traction.

A prime motivator for running a pick-up for the majority of L200 lifestyle users will be towing. That's something it's superbly qualified to do — and, as already noted, it's the only pick-up that can tow on road in 4WD.

In addition to carrying 1,050kg in its 1,470mm square, 475mm deep cargo bed (easily accessed via raised steps on the sides for easier access), the L200 will simultaneously pull a braked 3,100kg which gives it the best-in-class combined load bed capacity and full towing capability of 4.1 tonnes and makes it the first choice of workhorse for boat and caravan owners.

Where it also scores over most other tow-vehicles is that it will also carry a mass of 'gear' or a 'crew' of five people inside at the same time.

Off-road it's definitely a player thanks in part to the better articulation provided by the improved suspension, the low range settings of the Super Select 4x4 system adopted from the Shogun, and the upgraded active stability control.

Add in a ground clearance of 205mm plus approach and departure angles of 30 and 22 degrees respectively and a 24-degree break-over angle and you have a truck that will make short shrift of woodland trails as well as more challenging wilderness terrain.

With impressive economy for a paddle-shifting 4WD auto and macho in a handsome way, seriously tough and versatile with car-matching comfort levels, Mitsubishi's pick-up is most definitely a 'car' for all seasons that's also genuinely enjoyable to drive. — MotorBar