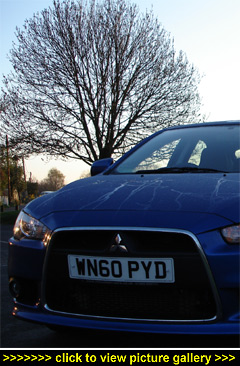 “‘Is that an Evo?’ The mistake is
excusable (at least for the uninitiated)
because Mitsubishi’s Lancer Juro
does, at least from the front, rather
look like Mitsu’s fire-breathing
supercar-slayer...”

IT'S THE EVO-ISH 'JET FIGHTER' nose fronting the Lancer's chiselled flanks that does it. But any meaningful resemblance ends on the outside: under the bonnet the Juro is at least one hundred and sixty wild horses short of an Evo. And in the pounds department — the kind you spend; not the kind you weigh — it's between 13,000 and 20,000 light of Mitsubishi's fabled barnstormer.

That's not to say the Juro doesn't have a lot to recommend it. It does. For a start you can put one on your drive for not much over Ł16K. And it's a sight more economical — twice as good, actually — than an Evo; expect a worst of around 42.1mpg (our hard-driven Juro's week-long test average). In fact we'd expect most owners to better that — officially it will return 44.8mpg in the combined cycle, 34 around the houses and as much as 55.4mpg on long, fuel-maximising motorway runs.

Inside the Juro the basic architecture is the same as the Evo's. Neat, logical dash and decent seats that keep you in place along with a generous serving of 'kit'.

The five-door hatch version — you can buy a four-door Lancer saloon, but not in juro spec — is also fitted with a rear wash/wipe. Such a seemingly ordinary piece of equipment might not seem that desirable but its usefulness cannot to be underestimated in bad weather; and this is the UK, after all.

Top of the list as far as 'stuff' goes has to be the Juro's high-end Kenwood multimedia set-up. Touch-screen operation makes it a doddle to use to control everything from the 3D Garmin navigation to the Parrot Bluetooth hands-free phone connection. There's also iPod/USB connectivity, TMC tuner, DVD/CD playback and FM/AM radio. Select reverse gear and the 6.95-inch monitor switches to a crystal clear full colour display of what's behind as the rear-looking camera electronically opens its single eye. And that really is a lot of kit for not a lot of your money.

Combined with a smooth-changing manual shift, it makes for undemanding driving — given today's frequently traffic-choked roads, that's all you really need. And it helps tremendously that the driver enjoys a first-rate driving position made more comfortable by height-adjustable front seatbelts.

Handling-wise, the Lancer Juro sits in the shade of the Evo's fearsome rep; but it's surprisingly puntable for a family car. There's a 'sporty' edge to the chassis, with body roll well checked. The steering's fine, with decent turn-in, and when the turbo's strutting its stuff you can have some fun.

Driven hard or soft it holds its line and rides well on its 5-spoke, 16-inch alloy wheels. And driving with the family aboard, it all stays shipshape and secure — exactly how you want it.

And then when you need to call a halt, the Juro stops without any fuss or drama courtesy of disc brakes at each corner (vented at the front).

Also, to reduce the possibility of rear-end collisions, Mitsubishi have fitted ESS — Emergency Stop Signal. During sudden braking, ESS produces rapid and automatic flashing of the hazard warning lamps to alert vehicles approaching from behind.

Family-friendly leather seating (so much easier to wipe down after the messy kids and muddy dog have jumped about in the car!) adds to the Juro's practicality, as too does the capacious accommodation front and back. Leg, knee and head room are all good wherever you sit in this near-Mondeo-sized Lancer — the Juro is just 46mm (1.8 inches) narrower and 199mm (7.8 inches) shorter than Ford's family charabang.

Good views out plus comfy side and central armrests ensure the rear cabin is relaxing to travel in. And your passenger won't need to travel with their luggage on their laps, either — the boot is a decent size and made even more versatile by an adjustable-height boot floor. Easy-release levers fold the 60:40 split rear seats in one go, turning the 344-litre boot into a 1,349-litre loadbay.

In exceedingly well-equipped Juro guise, the latest iteration of the Lancer hatchback makes a good fist of being the ideal family car. Better still, you don't have to drive 'dainty' to see 45+ to the gallon. And along with its eye-catching price you also get those Evo-cative looks. — MotorBar