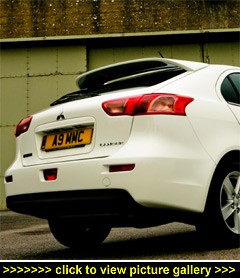 “Mitsubishi’s Lancer Juro is aimed
squarely at today’s cash-conscious
customers who still want a high
level of specification in their cars,
but at a budget price — and it hits
the target...”

WHAT JURO MEANS I'VE NO IDEA; it's not a miss-spelt 'Jura', as in the mountains between France, Switzerland and Germany or a Scottish island, so a new word 'Juro-sity' is perhaps fitting when the generous price and specification are considered.

The five-door Lancer is a smart but sporty looking family hatchback, similar in size to the Ford Focus, Vauxhall Astra and VW Golf — but it feels roomier. And the Juro models are thousands of pounds cheaper.

I've just driven the 2.0-litre DI-D turbodiesel Juro which, given the amount of 'kit', costs a very reasonable Ł16,399. However, even with the latest Mitsubishi global platform (also found underpinning the brand's Outlander and ASX SUVs), the tenth-gen Lancer is not as sharp in the handling department as the Ford Focus, Vauxhall Astra or VW Golf — but it is noticeably roomier.

Over our second-rate road surfaces the handling is unsettled and the tyre noise intrusion is too high. That said, the suspension is tuned for comfort. Through its stablemate high-performance Evo road and rally cars we know that the latest Lancer is inherently sound and well engineered, but for most real-life Juro customers the softer settings will be more than acceptable, especially as they are surrounded by the highest level of interior specification all parcelled up with good modern exterior looks.

The interior design is simple and the cabin well equipped. Some of the plastic trim used for the dashboard and centre console looks a bit low-rent but being from Mitsubishi you can be sure it will be very durable. The buttons on the Kenwood multimedia nav/sound system are so tiny they are really difficult to use although the touch-screen operation gets around this.

Also on a practical note, the 60:40 split/folding rear seats and large rear tailgate make it a versatile passenger and load carrier. And, importantly, legroom in the rear of the Lancer is better than most in this sector.

Outside, the Lancer Juro looks really very smart with its family 'jet fighter' grille, which extends from the chunky bonnet right down and into the under-bumper. At the rear, the large tailgate has an aerodynamic-looking rear spoiler which adds to the classy visual appeal.

The 2.0-litre DI-D turbodiesel (with intercooler) is sourced from Volkswagen and mated with a six-speed manual gearbox. Although Mitsubishi — famous for developing direct injection technologies for both petrol and diesel engines — has tweaked this unit, it's not perfect for refinement.

With 138bhp of power and 228lb ft of torque on call from 1,750rpm, the engine is relatively 'old-school' and not in keeping with the smoothness offered by 'younger' direct injection common-rail engines.

Compared to them it's noisy, sounds harsh and lacks mechanical polish. That noted, it's also pretty fast and accelerates briskly. However, despite its low-down torque it's relatively easy to stall because of its very high 18:1 compression ratio. Mitsubishi already have their own new-generation 1.8-litre DI-D diesel engine with variable valve timing which is both more potent and more refined; currently it's powering the ASX SUV range so in due course the Lancer will, hopefully, receive this powerplant instead.

What is likeable about the VW unit is its fuel efficiency: 44.8mpg is the official Combined Cycle figure and my test car easily achieved that and more, returning 47.7mpg over a week's driving on all types of roads, from motorways to urban crawls.

While its 165g/km CO2 emissions are higher than is usual with more modern engines (and incurs Ł165 in VED road tax charges and 25% BIK company car tax), the Lancer Juro does come with a generously high specification, is roomy and generally comfortable and also represents value for money. Yes, the ride can be unsettled and fidgety with road noise intrusion but the Juro model does look very smart.

For most retail buyers, I think the combined benefits of a high specification bundled with a low purchase price and good fuel economy will just about outweigh the higher tax figures. If it's a case of a lower purchase price, but with the comprehensive Juro 'kit', the Ł14,749 lower performance 1.5-litre petrol model looks an even better buy. — David Miles