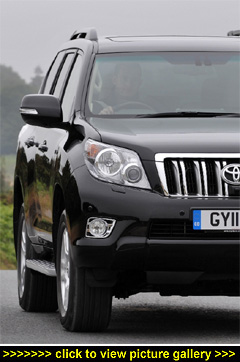 “Toyota’s Land Cruiser SUV is a
‘sure thing’, particularly when it
comes to retained value — Glass’s
Guide has just outed it as the vehicle
that’s held its value better than any
other UK model in 2011...”

ACCORDING TO THE WELL-RESPECTED GUIDE, a 2008 (57 plate) 3.0-litre D-4D Invincible with automatic transmission still commands 72.2% of its original on-the-road price. A good high to end the Land Cruiser's 60th anniversary year beating, as it does, all other cars sold in the UK ranging from Astons to Volvos.

As its name implies, the Land Cruiser is a big heavyweight 4x4 — 4.7-metres long, 1.88-metres wide and 1.88-metres high. Strong too; it will tow 3,000kg (braked). In its latest incarnation it boasts a high level of advanced but user-friendly four-wheel drive modes along with handling and guidance features to help any driver tackle the most challenging of routes.

The Land Cruiser's interior packaging provides versatile seating options with generous space for up to seven alongside practical cargo carrying. Our 60th Anniversary test model had three rows of seats: the middle row in a 40:20:40 configuration plus, in the third row, two forward-facing seats — on this version seats 6 and 7 are, thanks to electrical operation, very easy to put up and down in just a few seconds.

But with all seven seats in use there's not a lot of space left for luggage — a meagre 104 litres, in fact. However, this increases in stages as more seats are folded until the cargo bay maxes out at a mammoth 1,934 litres. Access to the load bay is through a side-hinged rear door. Helpfully, the back door's rear screen section can be opened upwards separately — ideal for fast-loading light objects.

For strength and durability, the latest Land Cruiser retains its traditional body-on-a-chassis design although the ruggedness is offset by new long-travel suspension. Ground clearance is 215mm and the wading depth an impressive 700mm (almost 28 inches).

The Land Cruiser's new, electrically-modulated Kinetic Dynamic Suspension System (fitted to LC4 and 60th Anniversary models) optimises the effect of the front and rear anti-roll bars for better on- and off-road performance.

On-road, the system works to minimise body roll, improve steering response, and absorb the effects of driving over poor road surfaces. On poorer surfaces, the hydraulic-linked valves between the front and rear dampers open and close rapidly to absorb the movement and balance the ride comfort.

Also fitted to 60th Anniversary Land Cruisers is an Adaptive Variable Suspension system. This allows the driver to fine-tune the ride characteristics via a switch on the centre console. Three settings are available: Normal, for everyday driving; Comfort for extra comfort when cruising; and Sport for better body control and precise steering responses when cornering.

While these selectable suspension settings are not so rare these days, they do work wonders and improve the handling and ride comfort of these big, tough and once unforgiving 4x4s.

Some motoring pundits will argue the Land Cruiser's handling is too soft, and that it 'floats' through corners rather than feeling planted on the road.

But that's exactly how real customers like their big 4x4s: comfortable, capable and cavernous. And I have to say that the ride comfort was one of the notable highlights of my test drive.

Yes, there's still some body roll but given the vehicle's high ground clearance, size and weight, it's remarkably stable and is insulated against the jarring effect of potholes — even off-road. And despite the large 18-inch wheels, the ride was impressively good.

For customers wanting a more focused on-road SUV, the Range Rover Sport, Audi Q5/Q7 and BMW X5/X6 are all needle-sharp in the handling department — but they're not comfortable to ride in at speed over poor road surfaces.

The Land Cruiser has permanent four-wheel drive with a limited slip centre differential and a rear differential with a diff-lock; there's also a transfer box for high and low ratio selection. While the torque split is normally 40:60 front-to-rear, the centre limited slip diff can vary this up to 30:70 to optimise grip.

In fact, when it comes to off-road technology, the latest Land Cruiser is one of the best, having all the functions and abilities that you'll find on the heavyweight Land/Range Rovers.

One criticism — the high/low ratio turn switch, two differential lock switches and crawl control are all positioned low down in the centre console. The Multi-Terrain Select and 2nd gear start mode selectors are, however, located on the steering wheel.

The Multi-Terrain Select function is first class, tailoring the optimum power and torque distribution to suit the various driving conditions. There are four terrain modes: Mud and Sand; Loose Rock; Mogul (operates in low range only for maximum grip at low, steady speed in very deep mud or snow off-road); and Rock (similar to Mogul but for crawling over big rocks at slow speed aided by independent slip ratio and selective braking for each wheel).

In addition to that, there's Active Traction Control which uses the brakes and engine to supply and distribute the right amount of torque between all four wheels necessary for maintaining traction when pulling away or driving on low grip surfaces.

Another handy function found on the 60th Anniversary model is the Multi-Terrain Monitor: four wide-angle cameras show the driver (via the navigation screen) live images of the front, rear and both sides of the vehicle when moving forwards or rearwards, on or off the road.

On this particular occasion I didn't drive the latest Land Cruiser off-road, but I have done so a number of times in the past, when it really impressed as it worked its way through tight and boggy forests, deep-mud meadows and in and out of rivers. I have driven it in the Sahara Desert where it coped reassuringly with sand dunes. What is especially impressive is the way that the Land Cruiser seems to remain reliable and durable in the hands of less sympathetic drivers in war zones, on safaris or dune-bashing.

And that's sufficient to get it from zero to 62mph in 11 seconds and on to a maximum speed of 109mph. Tailpipe emissions are 213g/km and the official combined cycle fuel consumption is 34.9mpg. Mostly driving on rural roads, and with some 70mph cruising on motorways, the best fuel economy my Land Cruiser achieved was 27.3mpg — not its best feature.

All five-door Land Cruisers make use of a five-speed automatic torque converter gearbox with a sequential manual mode. This works well most of the time although the auto 'box does occasionally change down too early when travelling downhill on-road, applying more engine braking than necessary. To rectify this, the shift lever needs to be put into manual mode to re-engage a higher gear ratio.

Against? The four-cylinder engine loses out in terms of power and strength to more commonplace six-cylinder units in this class. And it's not as agile on-road as some other big 4x4s.

As a heavyweight, go-anywhere 4x4 the Land Cruiser is impressive; as a roomy 4x4 it also fits the bill; and as a collection of the latest easy-to-use off-roading technologies it's one of the best available. Add to that its top-of-the-class residual value retention and the fact that it's also the world's best-selling 4x4 — even if it's not quite the world's best 4x4. — David Miles