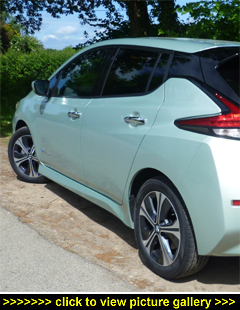 “You’d love to, of course you
would… but what about the ‘range’
issue? Forget it, because with up
to a 235-mile range, Nissan’s pure-
electric Leaf could very well be
the EV to overturn your excuses
for not buying an electric car!”

AND IF YOU DO, you'll be in good company because of all the straight EVs already driving on British roads, more than half are Nissan Leafs.

Looks-wise your neighbours won't know your Leaf is not just another conventional five-door family hatchback. More good news: there are no compromises when it comes to inner space — this is a fully-fledged five-seater measuring a smidgen under four-and-a-half metres nose-to-tail.

It's a well executed design, too, and the Leaf looks especially debonair finished in the Silk Green metallic of our press car. Its eye-catching appearance is enhanced by sharp-cut wings and an intriguing side profile accentuated by a deft Coke-bottle flourish linking the C-pillar with the roofline. At the front there's a trademark Nissan-branded 'V' grille that's plenty purposeful without being in-your-face, while at the back are spear-shaped wraparound taillights and no exhaust pipes to mar the minimalistic tailgate treatment.

While taking a minute to walk around this latest Leaf and appreciate the subtle touches, it will suddenly dawn on you that despite the athletic bodyshell it's actually taller than many of its classmates: in fact, at 1,540mm it's just two inches shorter than its high-riding SUV stablemate, the Qashqai — a definite bonus when getting in and out.

But its most important numbers are reserved for the range. Depending on whether you're motoring in a cityscape or on mixed open roads, a fully-charged Leaf will waft you along — silently and with zero emissions — for 242 city miles or, if you're outside the city gates, 168.

The reason you get substantially more miles-per-charge in city driving is down to the stop-start traffic which, in a traditionally powered car usually leads to raised blood pressure and lower mpg but which in the Leaf draws a permanent smile on your face because you know every interruption is extending your range.

In our real-world testing we regularly managed an anxiety-free 157 miles between charges, which underscores the Leaf's suitability to be an EV that you really can run as your only car.

Other figures of interest will be the acceleration and top speed: 0-62mph takes a crisp 7.9 seconds, proving that green 'n' clean won't take the sheen off your driving, although the 90mph top speed could still get you in trouble on the M25.

As reassuring as it is to know that the Leaf's bankable range trumps that of just about every rival, the elephant in the room for all EVs is the time required to charge up the battery pack. In the Leaf's case, a 7kW wallbox at home will dispense a 0-100% charge overnight in seven-and-a-half hours.

While you're out and about, a pit-stop at any public 50kW fast charger will 'refill' the battery pack from an empty warning to 80% in forty to sixty minutes while you read the paper and relax over a cappuccino and pastry. Usefully, pressing the appropriate button gets the SatNav to take you to the nearest charger that best fits in with your route.

If you're using a domestic three-point plug socket, then a full charge from zero will take 21 hours although we zipped through several half-full to 100% charge-ups in just six hours.

Making charging your Leaf easier is the plug-in charging port sited in the nose, where it makes a lot more sense than on the flanks (where many others put theirs), especially when using public charging posts. Thoughtf ully, it's also illuminated so no night-time fumbles, plus the charge leads are long enough to reach a domestic point at the very back of your garage (handy because you can't 'stretch' them piggybacking an extension cable). Another useful feature: on switching off, the system tells you at what time the Leaf will be fully charged again if you begin charging at that point.

Upping the convenience factor, using your mobile or laptop, you can remotely initiate battery charging along with cabin pre-heating and cooling, as well as checking the range and charge level.

Open the driver's door (easy-peasy courtesy of keyless entry and locking) and take your seat in the Leaf's spacious cabin. While some EV carmakers think a Star Trek fascia is de rigueur, Nissan haven't fallen into that particular trap — the smart, well-finished cabin could belong to any upscale non-fossil-fuelled car.

The large seats are well padded with effective bolstering (and very quick two-stage heating) and are upholstered in synthetic leather with patterned fabric centre panels. The flat-bottomed multifunctional steering wheel is also heated and finished with smart blue detail stitching — it only adjusts for height but that's not a problem as the seat is generously adjustable.

Top-hat levels of headroom, plenty of legroom, and height-adjustable seatbelts combine with a spot-on driving position and good all-round visibility to create a car that's easy to place and feels good to be in and to drive.

The dash is logically laid out with a regular 7-inch infotainment touchscreen at it centre; the instrument cluster features a traditional analogue speedometer adjacent to a customisable 7-inch TFT digital display. Keeping track of core driving data such as the charge and range (for instance: 97% and 155 miles), road speed (a crystal clear digital readout), the posted speed limit, and selected driving mode, is a doddle. Ensuring you can see all around the Leaf when manoeuvring in any direction is a multi-view monitor slaved to the infotainment screen — choose between two camera views: overhead with front, side, and rear warnings; plus front/rear with active guide lines.

Voice control is another 'plus', allowing you to keep your hands on the wheel and your eyes on the road while using the phone, or managing the SatNav (set the destination or perhaps zoom in on, say, a motorway exit), Audio, and Driver's Information (Where is the nearest charging point?; How much range is left?).

You'll also find in-cabin storage to be suitably accommodating, with siamesed dual-use cupholders, deep bottle-holding door bins, a storage box under the padded centre armrest, a large glovebox, and smartphone bay-cum-oddments tray at the base of the centre stack.

There's no steep learning curve before you press the glowing blue Power On button. In place of a conventional lever is a great-to-use joystick-style selector knob: Park is at 9 o'clock; Reverse at 12; Neutral at 3; and Drive/Brake at 6. Toggling between D and B (for some 'engine braking'/battery pack replenishing on the move) takes but a flick of the joystick. Close by is an Eco drive mode switch plus an e-Pedal button.

The Leaf's e-Pedal is not actually another pedal but simply a clever feature that lets the accelerator be used for undemanding 'one-pedal' driving that saves on wasteful braking by activating recharging braking when you lift off the throttle. The main brake pedal is still used for serious braking.

The system really comes into its own in town. You'll know it's on because the accelerator has more resistance than usual and the moment you lift off your speed fades progressively until you come to a complete halt as extra-strong regenerative braking cuts smoothly in (if necessary, automatically enhanced by some friction braking although you only need use the 'proper' brake pedal in an emergency). It's an addictive and utterly hassle-free way to drive in city traffic.

Upping its desirability as the cabin of choice to travel in is the electric drivetrain's refinement. If you're switching from petrol or diesel then the Leaf's serene cabin ambiance will be a real eye-opener, and adds considerably to the Leaf's laid-back driving style.

Comms are equally up to date courtesy of Nissan's Connect infotainment and SatNav system that along with Android Auto and Apple CarPlay for smartphone shack-ups also gives you Bluetooth connectivity, useful built-in apps, a decent hi-fi and a clear-speaking navigator you can trust. The clued-up navigation will, in addition to reliable spoken directions and idiot-proof mapping, pinpoint charging stations along your route.

Optional (Ł400) on the N-Connecta is Nissan's easy to operate semi-autonomous driver assistance system, called Pro Pilot — providing you keep your hands on the wheel, this 'auto-pilot' takes over the steering and intelligent cruise on well-marked traffic lanes while it manages your speed to maintain a set distance from the vehicle ahead and, when necessary, bringing the Leaf to a complete halt before pulling away again. It will even perform motorway overtakes; just flick the indicator on and it smoothly accelerates around the car ahead. Pro Pilot also brings with it an automated parking jockey able to handle both drive-in/reverse-out bay and parallel parking for you.

Entry to the rear cabin is through wide-opening doors that are not so big as to be a hindrance in car parks. A five-seat car, there's good room for four six-foot grown- ups in the Leaf, with three side-by-side being doable. Back seat passengers sit noticeably higher than their compatriots travelling up front but there's still decent headroom (and comfy headrests) and the views out are better as a result.

Cushioning, well-padded seats ensure that those in the back won't have anything to complain about; legroom and foot room in the wide footwells is generous. Parents will appreciate the Isofix child-seat mounting points and all passengers will be glad of the heated seats, bottle-holding door bins, biggish seatback pouches and conveniently long outer armrests.

You'll quickly take to wafting around in a Leaf because it moves almost silently, so much so that travelling in one, even in rush-hour traffic, is calming to the point of being meditative. Really, the sweet spot of a Leaf is its inner peace.

The ride itself is good even over poor tarmac and despite the slightly firm suspension (necessary to compensate for the hefty underfloor battery pack that contributes to its 1,640kg kerb weight) the Leaf rides agreeably flat, feeling well-controlled through the twisty sections on faster open roads.

Once you've thumbed the Start button and selected Drive just press the accelerator. The Leaf zips forward with real verve courtesy of 236lb ft of eager and instant torque, every last pound-foot of it on tap from the get-go — unlike a combustion engine that won't serve up its full load until at least 1,750rpm. The sheer slinkiness of the Leaf's acceleration and pace makes you feel that you're aboard a much higher powered premium car. Motorways are cruised with an equanimity that will calm even the most fractious passengers.

The Leaf steers well (both lightly in town but with ample directness to position the car confidently entering sweeping bends), handles predictably, and the brakes are powerful and confidence-inspiring — no easy task when blending regenerative and friction braking (as EV cars must) but Nissan's engineers have managed it nicely on the Leaf.

Add to that decent body control and its flat-riding demeanour and it feels both agile and unexpectedly entertaining.

Lift the hatch and the regular-shaped Qashqai SUV-sized boot offers 400 litres for luggage or a very large family's weekly shop (435 without the parcel shelf in situ), which is more than in other comparable pure-electric rivals.

Even better is the 1,176-litre loadbay you get with the 60:40-split rear seatbacks dropped down. Not being a fully-fledged estate car, there is a raised rear sill with a drop down into the boot and a step-up from the boot floor to the level backs of the folded rear seats, neither of which hamper this family hatchback's practicality.

Affordable, likeable and foolproof to drive, the Leaf provides family space and comfort along with a trustworthy and practical battery range that makes it a pleasure to own and drive. They say that once you've tried electric you'll never go back. Believe it! ~ MotorBar