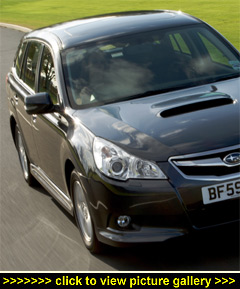 “With Subaru’s customary all-wheel
drive and a more refined version
of the unique flat-four turbodiesel
‘boxer’ engine, the new 2010 Legacy
Tourer lifestyle estate is perfect for
outright practicality of use...”

THE LEGACY IS NOW IN ITS FIFTH GENERATION covering nearly 21 years with over 3.6 million sales. The new version has improved styling as well and being slightly larger with a longer wheelbase, it offers roomy and comfortable transport.

Given the recent Arctic conditions, customers — especially rural ones — should be digging a path to their nearest Subaru dealership (there are 75 of them) to find an all-wheel drive car that meets our ever-demanding needs as motorists struggle to cope with less help from the Highways Agency and more tax grabbing by The Government.

Subaru has struggled in recent years with UK sales (down by 20% in 2009 and 23% in 2008) due in part to escalating prices, the servicing costs and the change in styling of their best-selling Impreza range. The late arrival in the market of the Tribeca 4x4 didn't help their cause and the aging Forrester 4x4 needs a replacement. However, the larger Legacy, particularly the estate/Tourer, has always had a loyal following from rural folk — and they tend to know a good, reliable, capable and practical car when they see one. Its rather conservative, slab-sided styling didn't matter because it appealed with its very capable all-wheel drive and comfortable passenger and load-carrying practicality.

Living in the country I see loads of Legacys in real-world use, whether they're used by the landed gentry, farmers, vets, doctors, the horsey fraternity or just as good old family transport. The Legacy, like the Golf, seems classless.

The new one, for now only in five-door Tourer (estate) guise, is available with two flat-four 'boxer' engine options: a 2.5-litre petrol unit mated to a CVT Lineartronic automatic transmission and the more popular 2.0-litre turbocharged diesel with a new six-speed transmission. Petrol models are available in SE and SE NavPlus specification; the diesel in S, SE and SE NavPlus. Prices, following the increase in VAT, now range from Ł23,745 to Ł27,995.

There is also the new Legacy Tourer Outback — the same vehicle but with more ground clearance and underbody protection for more hazardous off-road driving. Its engine line-up is the same but with the addition of a 3.6-litre 'flat-six' sports petrol unit with a five-speed gearbox. Prices for these range from Ł26,745 to Ł33,995.

Given the competition in the same medium estate car segment from the Ford Mondeo, Vauxhall Insignia, Mazda6, Citroen C5, Honda Accord, new Skoda Superb and old Peugeot 407, the new Legacy is relatively expensive but it does have all-wheel drive, residual values are good and the 2.0D S base model, priced at Ł23,745, looks the best value model in the range — especially for business users as it has the lowest BIK tax and road tax rating of any Legacy Tourer.

'Base model' doesn't mean the Tourer is poorly equipped. Indeed, the only noticeable items missing were leather upholstery and front and rear parking sensors. And an after-market SatNav would be just as good as the costly fitted one. The S specification even has heated front seats as standard to go with the air conditioning, electrically-operated windows, heated door mirrors, very good multi-speaker sound system, on-board computer, automatic lights and wipers and a full range of front, side and curtain airbags to accompany its five-star Euro NCAP safety rating.

Perhaps some owners might feel the 16-inch alloy wheels do not cosmetically fill the wheel arches but to be honest I found them ideal, with their narrower profile tyres, for cutting through the snow — and the ride comfort was good as well. Other than having optional parking sensors there is nothing I would want to add to the base S specification — it really is a good value package.

The instrument display is first rate although the buttons and controls layout is not so logical and takes time to learn because it is very comprehensive. The lighting and wiper control stalks are pretty well hidden behind the wide spokes of the steering wheel and the electronic parking brake button is not obvious to see or indeed easy to use. Generally the interior quality is no more than 'OK' because the European competition has improved so much with soft-feel plastics.

Those of us who know the Legacys of old will notice that the 2010 models no longer have elegant frameless windows: the new, less-sophisticated design is now like any other mid-sized car on the market, which is a shame. The main bodyshell is still slab-sided but its weighty looks are lightened by the new sculptured bulges around the wheel arches and there are bright trim surrounds on the windows to convey a more premium appearance. At the front, a fresh treatment of the Subaru grille is used and it is flanked by the modern concept of extended headlights that show their internal components.

All dimensions of the latest Legacy have grown by an average 50mm except the wheelbase which has been increased by 80mm to 2,750mm, giving one of the largest cabins in its class. The overall length of the Legacy Tourer is 4,775mm, the width 1,780mm and the height is a sleek 1,535mm.

Passengers will definitely enjoy the increased wheelbase, especially the three people in the rear who will also enjoy ample head and legroom. All the seats are comfortable and offer good support. For good measure, the load bay has a low floor (at bumper height) and the capacity is 526 litres with the seats raised and 1,677 litres with them folded. No wonder families and country folk love these cars — pushchairs or pooches, all fit in easily.

Thanks to the Legacy's low centre of gravity (a benefit of its compact 'flat-four' engine), the wide and long stance and the MacPherson struts at the front and double wishbone layout at the rear, the ride comfort is first class. Being a heavy car with a soft-ish suspension means comfortable travel but not dynamic driving: the handling is stodgy and lazy although foolproof thanks to the all-wheel drive grip and standard-fit ESP stability programme.

At the heart of the Legacy is its all-wheel drive system with a centre differential and limited slip differential. This moves the power around to whichever wheels have the most grip. And grip is certainly something this system gives the driver — when the roads are dry and equally so in the worst of conditions. The grip performance feels very well balanced and very safe. Some enthusiastic drivers might find it dulls the driving experience but for the majority of users it will provide constant reassurance and predictability.

Power for my test model was provided by the revised 2.0-litre, horizontally-opposed, 'flat-four' 'Boxer' diesel engine that Subaru took ages to bring to market. Tweaks within the engine include a new design for the piston crowns, improved gas flow from the combustion chambers, a revised turbocharger variable nozzle and ceramic glow-plugs for a faster start-up from cold. The engine remains a relatively high-revving unit for a diesel and produces 148bhp of power at 3,600rpm; torque is increased to 258lb ft from 1,800rpm. CO2 emissions are 161g/km, so expect a Ł150 annual road tax bill.

The engine is certainly smooth and quiet for a diesel unit; 'refined' is the right term but the gap between second and third gears gives the impression that the unit lacks torque. I found myself driving in town in second gear when I would normally be driving a diesel engine of this size in third or even fourth. The same applied in the snowy conditions: I wanted to drive in deep snow in the highest gear possible — third — but the engine would have none of it and second gear with higher revs was the result.

On the open road the unit uses its torque well and is very responsive in fifth and sixth gears. Talking of gears, the new six-speed gearbox was notchy — more so when cold — but, that noted, the change action was precise. And the use of high engine revs didn't detract from the impressive fuel economy. Officially this unit will return 46.3mpg in the combined cycle. My test car returned 44.4mpg and that included lots of snow driving and leaving the engine ticking over to de-ice the screens before moving off. Most impressive for a car of this size.

Overall, the new Subaru Legacy Tourer will tick lots of boxes for traditional Subaru owners for many reasons, not least of all its classless design, loyal brand values, all-wheel drive, comfort and loads of carrying space. Should the Saab brand die (as looks likely), then those owners wanting a car that is different, with a knowledgeable following and friendly dealers, will be well advised to give the latest Legacy some very serious consideration. — David Miles