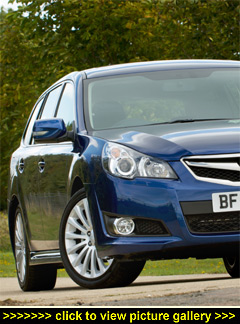 “It’s a Subaru so the full-time all-wheel
drive is expected. However, the
fifth-generation Legacy Tourer does
come with something new — a
‘Lineartronic’ auto transmission...”

SUBARU'S LATEST LEGACY TOURER has ushered in a handsome new body that clothes significantly increased dimensions: longer, wider and taller than the previous model, it also features an 80mm longer wheelbase designed to increase comfort for all occupants. As well as fresh styling, the new five-door Legacy Tourer estate has a completely re-engineered all-steel structure that has earned it a five-star EuroNCAP crash safety rating.

Just one powerplant is offered for each fuel type: both flat-four 'Boxer' engines. For diesel fans there's a 148bhp 2.0-litre turbodiesel that can only be had with a six-speed manual transmission while the petrol unit is a naturally-aspirated 165bhp 2.5-litre mated to Subaru's all-new 'Lineartronic' auto 'box.

Lineartronic uses a continuously variable transmission-type unit that enables the engine to operate continuously at the most efficient part of its rev-range and that, from the driver's seat, feels just like a normal automatic. Shifts are seriously 'creamy', which is to say very smooth indeed. And quick, too: the 'gear' change time in manual mode is just 90 milliseconds. Electronics provide six gear 'steps' and the driver can select the next gear sequentially (going up or down the gears) by using the paddles attached to the horizontal spokes of the steering wheel — left for down; right for up.

The 2.5 SE comes comprehensively equipped — so much so that that the only factory-fitted option is a special paint finish. Standard-fit kit includes black leather upholstery, cruise control, dual-zone, fully automatic air-conditioning to keep you cool in summer and heated front seats to warm in winter, 10-way powered driver's seat with memory, multi-function three-spoke leather-rim steering wheel, electric folding, heated door mirrors with LED indicators, premium audio system with RDS/MP3-compatible 6-CD tuner and six speakers (including two tweeters) plus voice activation for making 'phone calls and operating the audio along with a full array of front, front-side and curtain airbags.

The core appeal — stretching all the way back over five generations of Legacy estates — has been Subaru's customary all-wheel drive and the estate's fitness for purpose. As such it has enjoyed a strong following from those who live and work in the country where practicality and reliability is not much good without all-wheel drive capability for those times of the year when the going really does get tough.

The interior manages to be smart and simple at the same time — not such an easy thing to achieve — and fit and finish is fine; the four dials are clear, 'outlined' in aluminium rings and are illuminated constantly to improve visibility and while the dials appear white with the ignition off, they turn light blue with the ignition on. Lineartronic models have a compact gear selector as well as steering column-mounted paddle-shifters for sequential manual control of the gearbox.

The new Legacy Tourer's cabin is longer, wider and taller than that of its predecessor and there's impressive amounts of space. Up front you'll find large, wide seats with perforated centre panels that are very comfortable and provide good support, particularly around the shoulders and under the knee. The driver is well indulged with multi-way power seat adjustment (including lumbar support). The front passenger has to make do with four-way manual adjustment.

While enjoying excellent views out, rear passengers can relax in wide seats that can be reclined through a 20-degree range (seven stepped settings); as well as genuinely plentiful head and elbow room, masses of leg room and long seat cushions, these offer limousine-like lounging. There's ample space for a third 'piggy in the middle' rear passenger but he/she doesn't have the luxury of an individually-shaped seat — even so, it's unexpectedly pleasant sitting there. If just two are riding in the back, they can make good use of the wide folding centre armrest with twin cup-holders.

Thanks to the more compact new rear suspension, the cargo bay's capacity has gone up by 67 litres to 526 litres with the rear seats upright. Loading/unloading is hassle-free, helped by the squared-off load-bay's low floor. The voluminous 526-litre boot is more than adequate. However, release the one-touch catches just inside the tailgate and the backrests fold flat in one simple operation, freeing up a significant 1,677 litres of load space.

What will have no bearing whatsoever on your cargo but will be of critical importance to you and your passengers, is the ride comfort. Thanks to the new all-independent suspension layout, the Legacy serves up a cushioning ride quality — but not so soft (Bilstein dampers are also fitted) as to prevent the Tourer pressing-on when the need arises. Courtesy of the grippy all-wheel drive and the ESP system, the handling is always reassuringly foolproof, as indeed you'd expect from anything badged 'Subaru'. The Tourer is also very stable cruising the motorway at speed.

Appreciated features include the cabin refinement at speed, the non-distracting one-shot sunroof operation and the electronic handbrake controlled by a switch on the fascia that automatically releases when the accelerator pedal is pushed just so long as the doors are closed and the driver's seatbelt is fastened.

On the subject of brakes, the pedal is nicely firm with virtually no 'dead' travel and, with discs at each corner, stops the Tourer in its tracks. The new braking system also introduces a 'Hill-Hold' function — if you're stopped on a slope of 5% or more this holds the car on the brakes for one second after the you remove your foot from the brake; long enough to move it to the accelerator without rolling back.

Indian summer or Arctic winter, in this Subaru you'll always be aware of the unrelenting and balanced grip from the permanent four-wheel drive that, at all times, sends power to the wheels with the most grip. During normal everyday driving the torque distribution which achieves the best fuel economy is used. In addition to the full-time all-wheel drive there's a Vehicle Dynamics Control stability system, Traction Control, ABS, EBD and EBA braking systems.

The 2.5-litre horizontally-opposed Boxer engine beneath the Tourer's new bonnet is smooth and responsive and on the open road has plenty of torque. Top speed for the auto is 120mph with a 0-62mph time of 10.3 seconds. Officially the combined cycle fuel economy is 33.6mpg and during our week's test drive we came close — achieving 29.7mpg in mixed real-world driving conditions.

It's a very likeable estate, this new Legacy Tourer. And with permanent all-wheel drive, real comfort and impressive carrying space, the highly-specced Tourer is sure to please most people most of the time. — MotorBar