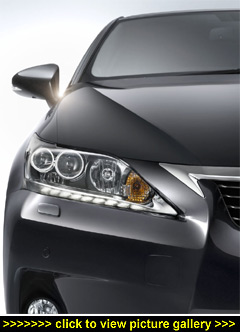 ROUGHLY THE SAME SIZE as the new Ford Focus, BMW 1 Series and Audi A3, but perhaps more importantly now that low- (and even nil-) CO2 emission models are coming to market, the compact new hybrid Lexus is in the same size category as the all-electric Nissan LEAF.

The LEAF costs Ł25,990 (after the government's current Low Carbon Car subsidy of Ł5,000 which, note, is due to end by March 2012). The big issue for would-be LEAF owners is that it only has a range of 109 miles between charges. However, because of its zero CO2 emissions it's free of road tax, company car tax and the London Congestion Charge.

The alternative choice Lexus CT 200h hybrid, with its combination of petrol and electric motors, is not only cheaper than the LEAF but is not restricted by its driving range and with 94g/km emissions it too is free of road tax and the Congestion Charge. Company car drivers will pay 10 per cent Benefit-in-Kind tax — a relatively small price for a compact premium hatchback.

Emissions and taxes aside, petrol must still be bought for the Lexus hybrid whereas electricity for the LEAF is almost cost-free at Ł2.50 for 109 miles. However, the LEAF only does 109 miles between its 8- to 12-hour charges — the CT 200h's trump card is that it has no limit to its range.

It also cannot really be argued that the LEAF is CO2-free because electricity production is said to equate to 70-80g/km — so while it might be free of CO2 at the tailpipe, the LEAF's polluting CO2 is emitted elsewhere.

All of which explains why the hybrid Lexus is a more viable alternative to the all-electric Nissan LEAF.

On top of that, Lexus is undeniably a more desirable brand. It has just topped the JD Power customer satisfaction survey for the 11th year running. Although the CT 200h is new to the range, and so does not figure in the latest results, there is no reason for it not to be just as user-friendly and reliable as the Toyota Prius hybrid — which is more or less the same model. As one automotive PR person put it: "The CT 200h is a Prius wearing a posh frock."

The CT 200h is a five-door, family-sized hatch available in three levels of trim: SE-I, SE-L and SE-L Premier. All use the same petrol/electric hybrid power train: a 1.8-litre, four-cylinder variable valve timing petrol engine paired with an electric motor with drive to the front wheels via a CVT automatic transmission.

The car can be driven in full electric EV mode for zero-emission city zones or when pulling away from parking; in ECO mode for the best fuel consumption (with engine power and electric motor combining as required); or in Sport mode where the electric motor is used to max the CT 200h's performance. The system also incorporates energy capture (stored in the lithium-ion batteries) through braking.

The out-and-out performance is nothing to write home about: top speed is 112mph and zero to 62mph acceleration takes 10.3 seconds. Officially, the Combined Cycle fuel consumption is 68.9mpg with low CO2 emissions of 94g/km.

In reality my test car — driven all the time in ECO mode because that is what this car is all about — returned 49.8mpg covering all kinds of journeys from city stop-starts, A and B roads and motorways so it should be representative of what can be expected.

Plus no road tax or London Congestion Charge to pay, and only 10 per cent BIK company car tax.

The CT 200h has come in for some criticism about the quality of its ride and the lack of feedback through the steering. These, however, are common views from the motoring press who perhaps no longer reflect in their reviews the realities of what the actual customers want.

Yes the suspension is firm, worse on some road surfaces than others; but not bone-jarringly so. The electronic steering is no worse that most of these modern energy-saving systems which do not have the feedback of the former energy-sapping hydraulic set-ups. The CT 200h offers good enough front-end grip during cornering and rides flat through bends so passengers are not inconvenienced by body roll.

In addition, it offers no-fuss motoring; it is really easy to drive and I found it no hardship at all to live with — indeed, due to an overlap of new test models it was my car of choice when I had several to choose from.

That's not to say that everything is perfect. The styling, for instance, is not premium class and it looks a bit bland although there is a hint of sportiness with some sharp contours — a tad more Toyota or Subaru than Lexus.

Inside is better and the Lexus high-quality theme of co-ordinated fixtures and fittings has been cascaded down, although a door-pull capping came off twice during my time with the car.

Rear seat legroom is not the most plentiful and, at 375 litres, the boot is not as large as those of most cars in this sector — however, fold down the rear seatbacks and this does increase to 965 litres. In fact, as far as space goes, the CT 200h is probably more suited for business singles or couples rather than family use.

The specification is high, even on the cheapest model. Across the board all versions are fitted with alloy wheels — 16 or 17-inch, according to customer preference. Go for the smallest ones to minimise the firm ride.

The CT 200h is compromised in some areas but it will definitely bring new customers to the Lexus brand. It keeps tax costs to a minimum, offers seamless petrol/electric power, better mpg, lower CO2 emissions and is quiet. Against? A firm ride, lifeless steering and limited rear seat space and that door-pull capping problem is not reassuring.

Its strongest point is that there's no compromise to be made on the distance that can be driven. With the CT 200h petrol/electric hybrid, one car does it all whereas with an electric-only power the driving range is very limited and normally means owning two cars, which is far more expensive in every way. — David Miles