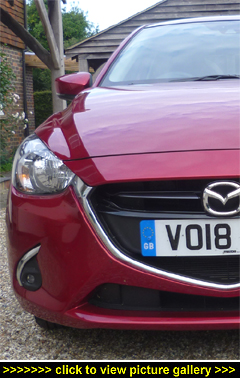 “Mazda’s handsome supermini
comes with five doors and petrol
power only; it’s also surprisingly
practical, drinks like a camel
and is fun to drive. What more
could you possibly want?”

THE LATEST '2' offers a choice 1.5-litre 'Skyactiv-G' technology powerplants in three states of tune: 73, 88 or 113bhp. These are all high-compression, naturally-aspirated four-cylinder 1,496cc engines that serve up excellent real-world economy alongside plenty of pep. The 88bhp version's official Combined Cycle fuel consumption figure of 57.7mpg tends to bear out the economy claim — during our week of heavy-booted driving we never saw less than 50mpg on the trip computer.

As for the 'pep', the 88bhp engine is a sweet revver, pulling strongly whenever your right foot presses down — cleanly to the redline, if that's what you want. Enough to take you from standstill to 62mph in a crisp 9.7 seconds and on to a top speed of 117mph. Maintaining zesty progress is made easier by the polished shift action of its five-speed manual 'box that has that sports car 'snick' and nicely weighted throw that marks out a quality gate.

Partnered by nicely-weighted clutch and brake pedals, around the houses the 88bhp unit is unruffled although, thanks to strong torque kicking in around the 2,500 marker (and peaking at 4,000rpm) it's nevertheless punchy and quick to respond in traffic.

Freed of the constraints of town traffic it's a composed machine to cover ground in; show it a motorway and it'll show you a hushed and relaxing cruise. So, while petrol is the only choice in the '2', it's by far and away the best choice.

It might be Mazda's smallest car but the '2' is big on presence. Our Soul Red crystal metallic Sport version, wearing the brand's distinctive signature trapezoidal grille with chromed 'wing' badge and flanked by predatory headlights and LED running lights, really looked the biz. The well-planted stance is emphasised by a distinctive rear shoulder treatment and 'cab-rearward' glasshouse and it wears its eye-catching five-door outfit with panache.

The showroom appeal continues on the inside where the cabin exudes an upscale air, helped by some smart touches such as a trio of Audi-style eyeball air vents (the fourth is blended into the strip that runs widthways through the centre of the soft-touch dash. It's all refreshingly clutter-free, with minimal and nicely grouped switchgear, and thorough attention to detail and fit and finish. In fact the whole lot wouldn't look out of place in a car from the class (or even two) above.

The comfortably bolstered seats are upholstered in all-weather-friendly two-tone fabric and offer decent shoulder and upper back support while the pedals are comfortably sited and not spoiled by any offset; together with a multifunction (phone, audio, trip computer, cruise and speed limiter) three-spoke steering wheel with a meaty rim wrapped in matt black leather they all contribute to a driving position that's just right, helped by decent elbow room for when some quick wheel work is called for along with a respectfully civil gap between you and your front passenger.

There's a fist of headroom and from behind the wheel visibility out is very good; also easily viewed is the cowled central speedometer that's flanked by smaller displays for the rev-counter and driver's multifunction onboard computer, while to the driver's left on the clean fascia sits a stand-alone seven-inch infotainment and SatNav touchscreen.

Not only is it easy-peasy to use with foolproof destination input and crystal clear lane guidance but if you're not a dedicated screen-tapper you'll be pleased to find the command wheel joystick controller on the centre tunnel (aft of the gearlever alongside a trad handbrake) that also operates the touchscreen.

The high-definition touchscreen comes with a set of straightforward menus and is, naturally, smartphone compatible for easy access to your personal music and social media connectivity plus handles text messages, etc. Aha and Stitcher apps are integrated Internet radio, Facebook and Twitter functionality. A DAB radio, CD/MP3 player with six speakers, multiple USB and Aux jack and integrated Bluetooth are also all present and correct. Added to that there's ample in-cabin storage with bottle-holding door bins (with room for more) plus a large glovebox, twin dual-use cupholders and several open trays.

The Mazda2's swoopy rear roofline doesn't actually steal much headroom in the back, and five doors are definitely better than three if you're going to be one of those travelling there.

Grown-ups' legs are well accommodated, with lots of foot room under the front seats, it's airy and the seats are comfy with close to a fist of headroom so there's room to go round for purely adult passengers as well as those with young families (who will also be glad of the standard-fit Isofix child seat mounts).

Ride quality isn't always all it should be in a supermini but the Mazda2 comes with an easygoing ride that, around town, manages bumps adroitly (speed and other sorts) to keep those aboard fairly well isolated, and in this it's helped considerably by a handling deportment that sees it staying on an even keel. Out making merry on B-roads, the suspension is compliant without injecting any sloppiness into the sharp handling.

If you like to have some fun when you're driving you'll be delighted with the Mazda 2's agile driver-focused handling; for a start it stays flat and focussed when pressing on, helped by decent weighting at the helm and quick turn-in from the electric-assisted rack-and-pinion that's geared for prompt responses and a tight 4.9m turning circle, all reassuringly underpinned by some pretty decent grip. Lending a hand, too, is Mazda's G-Vectoring Control (added with a host of suspension and steering updates last summer), which uses the engine's torque to subtly improve turn-in and handling in corners and through bends. And when you need to scrub speed you'll be glad of the strong ventilated front discs.

In a nutshell, this latest Mazda2 is an easy and satisfying car to drive keenly (if that's your mood); you just know that Mazda's engineers have spent serious time getting the overall handling-ride balance just right to create a supermini with no hidden vices that essentially goes where you point it.

This is a supermini so a 280-litre boot is pretty good going; it's easily assessed via a wide tailgate and is deeper than many. Tumble the 60:40-split back seats and this jumps to a 950-litre loadbay with a short step up from the boot floor to the backs of the folded rear seats. There's also an eight-inch drop over the rear sill to the boot floor — neither is a problem as nobody would expect to fit an American fridge-freezer in there!

And if you need to tow a small trailer the 88bhp version will haul a braked 900kg; not forgetting 50kg on the roof — not bad for a supermini! Oh, and under the floor you'll find a tyre repair kit and some additional storage room.

Sure there are plenty of rivals in the supermini class such as the Fiesta, Nissan's Micra, the Honda Jazz, and VW's Polo but none have the Mazda's appealing 'pull' of premium looks and sweet driveability. Throw in 50+mpg economy and the Mazda2 appeals to the head as well as the heart. If this fun-to-drive sassy supermini is not already on your radar, it should be! ~ MotorBar