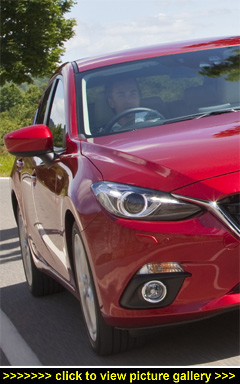 “In a medium-car marketplace so
crowded and competitive, how do
you make a car stand out?
The answer seems to be: you make
its design so appealing that it’s
irresistible. That’s getting harder
and harder, but I reckon Mazda has
nailed it with their all-new Mazda3...”

MAZDA HAS A LONG HISTORY of making very credible, good-looking, reliable, and great-to-drive cars. Applying logic to the equation, the Mazda brand really should be sweeping all before it. Yet the Japanese company has been having a tough time sales-wise in recent years. Why? Because it's suffering from the same 'squeezed middle' market positioning that all volume brands are experiencing: if you're not either budget or premium, sales are sluggish.

Which makes standing out in the marketplace all the more important. And in styling terms, the new '3' really does look unique. The roofline has the low, sleek air of a swoopy fastback. But that's not because it actually is low — more because the car is so long. At 4,465mm, it's just 39mm shorter than a BMW 3 Series. That means cabin space, both front and rear, is huge; only if you're very tall might you have an issue with headroom in the back.

There are two body styles: five-door Hatchback and four-door Fastback saloon. In the UK, easily the more popular will be the hatch — not surprising given its far greater practicality — while the saloon suffers from a narrow boot aperture, the hatch model is extremely accessible.

At 364 litres, the hatchback's boot is very big; with the rear seats folded there's a generous 1,263 litres. Pleasingly, it has a very easy mechanism for folding the seats — and a flat load floor once they're down.

The new Mazda3 weighs 1,347kg, making it one of the lighter members of the medium car class. That helps both performance and fuel economy. Economy-wise, every single manual-transmission model, whether diesel or petrol (other than the top-spec 165PS version), comes with CO2 figures of 119g/km or less, keeping them in the low-tax bands.

The 120PS 2.0 petrol model will be the most popular choice in the UK. In this era of hybrids, electric cars, small-capacity turbocharged engines and super-efficient diesels, it's a real pleasure to come back to a regular petrol car that really works — on all fronts.

The engine is super-sweet, free-revving and refined. It performs very well, too, even if you have to keep the revs high to extract the best from it. And it also has the benefit of low CO2 emissions (119g/km) and a claimed mpg figure of 55.4.

There's also a 1.5 petrol engine — an all-new unit that will have a big future in Mazda's range. However, so far as the Mazda3 goes, it's only expected to account for one in 20 sales.

I also drove the 165PS (162bhp) petrol version, which is a real performance tool — not a true hot hatch, admittedly, but quick enough. Although its 0-62mph time of 8.2 seconds isn't that much faster than the 120PS petrol's (at 8.9), it's the healthy mid-range pull that really stands out. If you can stomach the higher running costs that its 135g/km CO2 figure brings, and the fact that only a top-spec version is available (at Ł21,620), the 165 makes a great choice.

Previous generations of the Mazda3 have always stood out in terms of driving enjoyment. Mazda reckons it's got the new model spot-on, too, and by and large that's true. The chassis is essentially very well set up, offering enough grip and feedback to satisfy enthusiastic drivers, as well as safe handling that will keep inexperienced drivers on the straight and narrow.

Cars with low-profile tyres (and these days, that's almost all of them) tend to have a stiff ride but Mazda has got the balance exactly right — the ride quality is firm but comfortable over all types of tarmac.

My only slight criticisms are some tyre noise over some surfaces and a certain lack of precision when you first turn the steering wheel to go around a corner. The 3's main problem, however, is that the VW Group now has a platform sitting under the new Golf, Seat Leon and Skoda Octavia that just blows all the competition away with its assured ride/handling balance.

Another Mazda3 strong point is equipment; and there's tons of it in the new model. An unusual first is that the Mazda3 becomes the only car on sale in the UK with internet apps as standard on all models (even the entry-level SE). So you can hook up to things like Aha (a global radio app — and no, you don't just have to listen to Norwegian pop music on it), Stitcher and Facebook, as well as reading your emails and texts through the car's info system.

Nav models also get an integrated SatNav system, while Sport Nav versions have a standard head-up display, which beams info such as speed and navigation directions up on to a little screen in the driver's line of sight. Of its type, the head-up display is pretty basic and I'd like the screen to be adjustable, but the feeling you get using it is all very Top Gun — and it does make things a lot safer as you don't need to take your eyes off the road.

In the new '3' Mazda has produced yet another excellent model, joining a highly credible line-up whose current stars include the CX-5 and Mazda6. In a very toughly-fought market for medium cars, the '3' really does stand out, especially in terms of design and space. — Chris Rees