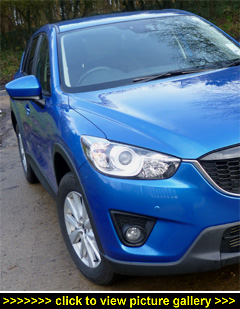 “SKYACTIV. If you think that sounds
very 007-ish then you’re way off
mark because, actually, it’s a core
feature of Mazda’s latest compact
crossover — the CX-5...”

WHICH ALSO SHOWCASES, as it happens, the Japanese carmaker's Kodo (Soul of Motion) design. So, a brave new world-ready five-door SUV with a spec to suit everybody: 18 models offering 2 or 4WD, diesel or petrol power, manual or automatic transmissions, and prices from Ł21,395 to Ł28,795.

Let's cut to the chase: SKYACTIV. What is it and what's in it for you? SKYACTIV is a set of fuel-saving technologies blending lightweight chassis engineering with optimised powertrains and super-efficient transmissions. It came about after Mazda realised that the long-serving combustion engine, far from being close to extinction, still had a lot more to give; and that hybrids and electric vehicles wouldn't be the dominant species for a long, long time.

The SKYACTIV-engineered CX-5 is unquestionably good: in six-speed manual spec, the 148bhp diesel model tips the scales at just 1,525kg and can return as much as 68.9mpg (extra-urban) and 61.4mpg (combined), while emitting a lowly 119g/km of CO2. Remember, this is not some tiny city car but a fully-fledged, family-friendly, five-seater, five-door crossover SUV.

Before you go Googling rivals' mpg and emissions outputs, take it from us that the CX-5's figures are seriously good. Our week-long and unrelenting (fully laden during a house move) experience with the automatic version saw an average 42.3mpg (against the official urban figure — most relevant to our test conditions — of 45.6mpg). Driven in the manner that most motorists drive, we would expect them to achieve an average closer to the official combined figure of 53.3mpg.

And while we're talking economy, Mazda's fuel-saving idle-stop (i-Stop) system is fitted as standard and also deserves a 'hurrah' — it works a treat; so well you really don't notice it at all.

Sitting alongside the 148bhp 2.2-litre turbodiesel in the line-up is a 172bhp version of the same unit; together, these diesels will account for the bulk (85%) of UK CX-5 sales. Neither have petrol-lovers been forgotten — a 2.0 powerplant outputting 162bhp is also available.

Diesels, more often than not, are workhorses as opposed to thoroughbreds: 'fit for purpose' about sums them up. But Mazda's new lightweight all-alloy SKYACTIV four-cylinder twin-turboed diesel is a racier beast.

It helps that backing-up its 148bhp is, from 1,800rpm, a hefty 280lb ft of torque that delivers enthusiastic acceleration off the line, hitting 62mph in ten seconds. Top speed is 123mph. Keen drivers will find it's as quick to respond smoothly to your right foot as a petrol engine and feels nicely torquey in the mid-range. In fact, right across the rev-band this new diesel's performance could fool you into believing there's a petrol engine under the bonnet.

The auto 'box is also SKYACTIV designed. Mazda says it brings together the best attributes of conventional step automatic transmissions, continuously variable transmissions and dual-clutch transmissions, all in one compact and lightweight package.

On the road, in traffic or motorways, it certainly delivers with an engaging feel and creamy, quick shifts with well-sensed, appropriate responses. Hooked up to the 148bhp turbodiesel it makes for a satisfying two-pedal partnership.

Equally as impressive as its petrol-like 2.2-litre diesel engine is the CX-5's ride. Underpinned by an all-new lightweight yet ultra-stiff SKYACTIV chassis with a compliant suspension, its fluent ride comfort will be appreciated by both driver and passengers.

Standard rims are 17-inch alloys but they don't look out of place in wheel arches capable of accommodating 19-inchers. The consensus of opinion wheel-wise is that while it rides well even on the 'big-uns', stick with the 17-inch wheels if you want the very best ride.

Better still, the CX-5's comfort doesn't come at the expense of handling, which also benefits agility-wise from the weight-optimising SKYACTIV technology. We found the front-driving model reassuringly predictable with direct steering that makes placing the CX-5 accurately on the road easy, and it can be hustled along quickly and cleanly.

Add in decent body control and you have a recipe that serves up agreeably sharp driving that's far more sporty than you would have guessed from its soft-roader body style. The brakes require little effort to shave off speed or bring you to a drama-free stop in an emergency. Exactly how brakes should be.

The CX-5 is also available with 4WD. This 'part-time' system gives a front:rear torque split ranging from 100:0 to 50:50 with up to 50% of drive power being dished out to the rear wheels to optimise traction whenever necessary.

When it comes to safety the CX-5 comes as standard with Mazda's Smart City Brake Support — like similar systems pioneered by Volvo, this helps a driver to avoid a low speed (up to 19mph) frontal collision by activating the brakes and reducing the engine output if the system detects a frontal collision is likely. So, no more annoying back seat drivers!

Back to that 'Soul of Motion' design — strip away the philosophical Japanese name and you still have a smart-looking vehicle with a coupe-like profile, a rising waistline linking the wheel-at-each-corner stance and, the finishing touch, a steeply raked tailgate. Inside it all looks good too: smart, well-trimmed with quality materials, plenty of attention to detail and well laid out with a high-gloss lower fascia and just enough satin chrome to be tasteful.

The SatNav also comes with an intuitive BMW iDrive-style joystick (located just behind the selector lever) for safe and easy operation on the fly. The dials are crisp and clear and the one to the right of the three-dial arrangement displays core driver information, conveniently accessed via the info button on the wheel. To the left is a smaller rev-counter which also shows the gear/mode you're in.

No-effort manual override gear shifts are made by nudging the selector lever forward or back when in Sport mode. The centre armrest doesn't foul the trad handbrake (as too many others do). Nice, also, to find the handbrake on the driver's side of the transmission tunnel rather than on the passenger's side, and it makes for no-stretch usage.

Cruise, voice, audio and phone functions are all accessible using the buttons on the good-to-hold wheel. Plus there are plenty of storage bins and cubbies to neatly stow a whole family's stuff.

Yet another welcome side of the CX-5 is its easygoing ability to move people in a relaxed and comfortable manner. Cabin space is generous for four adults. Big, supportive seats with effective shoulder support, ribbed fabric centre panels, and long seat bases for proper under-thigh support guarantee long-distance comfort, as does the ample well-judged bolstering.

The driver is well catered for with height adjustable front belts, seat height and lumbar adjustment and plenty of steering wheel adjustability for reach and height. A high-seated driving position with commanding views and first-rate visibility can be taken for granted, as can generous room surrounding each front chair.

Rear seat passengers give up nothing by travelling in the rear cabin — it too is very roomy and legroom is impressive. There's also width for three on the shapely rear bench; or two can share the rear central armrest with cup holders.

The boot is equally honest — its rivals-trumping 503 litres will take all a family or four adults can throw in it. Maximising load space is made extra-easy by the CX-5's 'Karakuri' seating system: the 40:20:40 split remote-controlled seats fold totally flat in one action to make 1,620 litres instantly available for cargo-carrying duties.

This three-split format really is useful, letting you, for instance, carry a long load while still accommodating an adult and child in the rear cabin. Another labour-saving (and handy) touch — the luggage cover opens automatically with the tailgate as it rises (and returns to its closed position as the tailgate shuts). And should you need more room, just lift the boot floor to access a large lift-out luggage tray.

Overall this new CX-5 has the ability to be all things to all people: passengers will get from A to B in real comfort; drivers will enjoy getting them there; and when not carrying out family duties it doubles as a serious cargo carrier.

It's also pretty damn good on fuel and its diesel powerplant comes with a petrol-like persona. There's a lot of competition in this class, but the CX-5 is classy enough to give them all more competition than they'll want. — MotorBar