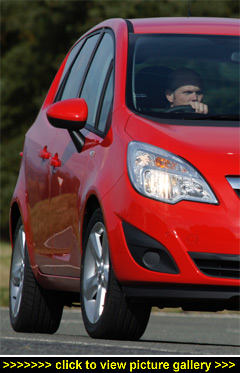 “It’s got something in common with
Rolls-Royce, London black cabs, the
Mazda RX-8 and the MINI Clubman
estate — and family Brits love it!
It’s also got a new 1.3-litre ecoFlex
diesel engine...”

VERSATILE MULTI-PURPOSE VEHICLES are big business. Last year, UK buyers snapped up 124,209 of them. Of course, MPVs come in a variety of shapes and sizes, from the newly-emerging compacts such as Ford's soon-to-arrive B-Max and medium size models like Vauxhall's market-leading Meriva to large versions such as the Renault Espace or the truly large Chrysler Grand Voyager.

In these financially hard times, some new car buyers (and company car users too) are switching to vehicles offering multiple passenger space as well as versatile load carrying abilities. While MPVs appear to be more socially acceptable, they're also visually more desirable than a humble hatchback which is another reason why downsizers find them appealing.

Which brings us to the Meriva. The UK is Europe's best market for Vauxhall's smart MPV. In fact, we family Brits love it — over 12,000 have been sold here since its June 2010 debut.

At the time of the Meriva's launch I did have some doubts as to the public's acceptance of its revolutionary design.

My doubts 'hinged' upon the Meriva's forward-opening, rear-hinged rear side-doors. Admittedly Rolls-Royce, London black cabs, the Mazda RX-8 and the MINI Clubman estate all have similar rear side-door layouts but the Meriva was the first volume selling family car to have them. Time, however, has proved that Vauxhall has a winner.

The much-liked Meriva range has recently received two additional diesel engine options. The first is the 1.3 CDTi ecoFlex 95PS (93bhp), the lowest emissions model in the range with a CO2 figure of 119g/km and prices starting from Ł17,970.

In terms of purchase price this is more costly than what I believe is the best model in the range for retail buyers — the 1.4T 118bhp petrol engine which costs from Ł16,585. The second new powerplant is the most powerful diesel engine, the 128bhp 1.7 CDTi, priced from Ł19,140.

Now that diesel fuel is considerably more expensive than petrol, retail customers must be shifting their thoughts back from 'oil burners' to unleaded drinkers. For family cars the rule of thumb guide for anyone driving less than 15,000 miles per year is that it pays to be powered by petrol.

When it comes to choosing the engine for your Meriva there's certainly no shortage of powerplant or spec options. Actually, there are 29 different variants within the engine line-up comprehensively covering all requirements. There are new generation 1.4-litre, variable valve timed 16V petrol units ranging in power outputs from 98bhp (normally aspirated) to 118bhp and 138bhp turbocharged units; there are 1.3 and 1.7-litre CDTi turbodiesel units of 73 to 128bhp. Specification and equipment levels are Expression, S, Excite, Exclusiv and SE (depending on the engine). Prices vary from a modest Ł12,995 to Ł21,730.

My latest drive in a Meriva was with the lowest CO2 (just 119g/km), and potentially most fuel-frugal, new 93bhp 1.3 CDTi ecoFlex which officially manages an average of 62.8mpg. No road tax is payable for the first year, and after that it's only Ł30 per annum.

The four-cylinder 1.3-litre turbodiesel unit generates 93bhp; torque is 133lb ft from 1,750rpm. With the ecoFlex engine mapping, over 60mpg should be achievable if the car is not fully laden although my test car didn't quite manage that — my best was 52.1mpg. But even that guarantees more than 600 miles between forecourt visits.

Regrettably I can't say the engine is refined, very quiet or indeed swift. It rattles from cold start-up but although the noise didn't intrude too badly into the vehicle.

Acceleration was a tad tardy: you'll need 13.8 seconds to get from zero to 62mph and the top speed is 104mph. Performance-wise, it's a convenience car and, more or less, it does what it says on the label.

The Meriva's styling mirrors the Astra and Insignia families, as well as the revised Corsa models. The innovative FlexDoors system with rear-hinged rear passenger doors definitely makes for easier access when belting-up the kids.

It's also handy for more senior passengers as they can 'back' into the seats and then get out with ease in a forwards direction.

All four of the side doors open wide to 90 degrees, which also aids entry and exit. However, in the side-by-side parking typically found in car parks, the extra opening angle is useless as the spaces are so narrow the doors cannot be fully opened anyway. The same restriction applies to single domestic garages. However, loading and unloading on driveways and kerbsides the wide-opening feature works well.

Vauxhall's FlexSpace seating combinations (rear seats up/down) are very easy and light to use and the sliding rear seats are suitable for two adults or three children. The versatile seating, coupled with the FlexFloor, allows for a minimum load space of 400 litres up to a huge, given the overall size of the car, 1,500 litres.

My Exclusiv test car's equipment level was of a decent specification — it's also the most popular choice but business users will want to add in the optional mobile 'phone system with Bluetooth (an extra Ł225). Annoyingly, this specification does not include two obvious functions that are much needed: the first being an mpg readout function for the on-board computer.

Surely anybody buying an ecoFlex Meriva would be eager to check on their car's real-world fuel economy? In theory this model should cover over 700 miles of motoring between visits to a fuel pump. But with my test vehicle only managing 52.1mpg during typical day-to-day driving on motorways, A- and B-roads and stop/start driving, perhaps it wouldn't make such good reading…

The second missing piece of equipment, which should definitely be fitted as standard, is front and rear parking sensors. For busy company car drivers or stressed mums and dads, this family bus surely needs them.

That said, the Exclusiv version does offer such items as AirCon, cruise control, a reasonable quality sound system with Aux-in connection, electronic parking brake (although it's annoying to use), power-operated and heated door mirrors, electric front windows, a full array of airbags and other safety related items, the FlexRail centre storage system, the FlexSpace rear seat fold/locate facility and the FlexFloor load space. By the way, wheels are steel with trims, not alloy.

Against? Diesel models carry a higher purchase price so petrol models could be better options for lower mileage users, wide-opening side doors limited for real-life use in car parks, an 'eco' model with no on-board fuel economy read-out — surely on oversight? And no parking sensors.

In its favour the Meriva is potentially very economical on fuel and it's also very low for taxation as well as insurance costs. Plus it's a comfortable, compact and clever mid-sized, five-seater MPV that drives well with safe and predictable handling. — David Miles