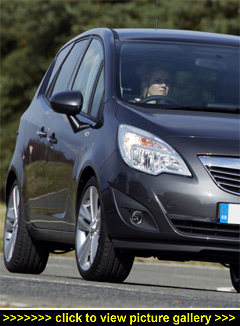 “Once upon a time your ‘flexible friend’
was your credit card — now it’s
Vauxhall’s all-new Meriva mid-sized
MPV that uses ‘Flex’ technologies
in the form of FlexDoors, FlexRail
centre console storage and
FlexSpace rear seating system...”

THE ALL-NEW MERIVA IS NO LONGER A MINI MPV — it has moved up in size to become a four/five-seater family segment MPV with smarter user-friendly features, better equipment levels, better quality and a higher price.

Although the range actually starts at a lower price of Ł12,995 (for the 1.4-litre 98bhp petrol Expression version), the mainstream models show an average price increase of Ł1,200 although Vauxhall says this reflects the advantages the newcomer has over the old.

Engines are 1.4 petrol (normally-aspirated and turbocharged) with power outputs of 100, 118 and 138bhp and 1.3 and 1.7-litre CDTI turbodiesel units with 97 and 104bhp — still to come are 93 EcoFlex and 135bhp CDTI units. The 118bhp petrol engine will be the most popular, followed by the price-leading 98bhp petrol version. Trim and equipment levels on offer are Expression, S, the best-selling Exclusiv and SE. Vauxhall expects the new Meriva to sell over 20,000 units a year in the UK — a bit more than the outgoing model.

The new model is 4,228mm in length, up from the 4,052mm of the old Corsa-based version. The new model uses a revised suspension layout from the previous Meriva but with a floorpan associated with the seven-seat Vauxhall Zafira MPV. Inside, the design and layout of the controls, instruments and overall the higher quality reflects the theme offered by the new Astra and Insignia ranges.

But it is the FlexDoors system that will grab all the headlines. FlexDoors are rear-hinged back doors which swing open towards the back of the car at an angle of nearly 90 degrees, vastly improving the ease with which occupants enter and leave the cabin. Rather than having to step back, or to one side — as one would using a normal front-hinged door — the FlexDoors allows unimpeded forward access to and from the cabin, enhanced further by the Meriva's high roof line.

For parents with children, there are further benefits: due to the larger door opening and free space around the B-pillar, parents can lift small children forwards in to rear-mounted, second-stage child seats without having to contort themselves around a door. And with both the front and rear doors open (the fronts open at a similar angle to the rear FlexDoors) there's a parent-friendly 'loading zone'. And for ladies wearing short skirts there is an added element of modesty when stepping in or out of the rear cabin.

For obvious safety reasons, the FlexDoors cannot be opened by occupants while the Meriva is travelling at more than 2mph, after which the doors automatically lock. The sophisticated system also warns drivers if a door is not completely closed.

The concept of rear-hinged back doors is not new in the motor industry — cars in the 1930's, 40's and 50s used this system for front and rear doors as did London cabs; and as still today do Rolls-Royce, Mazda (RX-8 Coupe) and MINI (Clubman). But the Meriva's FlexDoors system is the first time it has been used on a family car in recent years and unlike other rear-hinged door applications, the Meriva benefits from front and rear doors that open independently. As yet the Meriva has not received its EuroNCAP safety rating but Vauxhall is sure it will achieve a five-star passenger safety ranking.

While this system really works and looks safe, the wide opening front and rear side doors do lose some of their benefit because they cannot be fully opened when the car is parked in the ever-shrinking parking bays in car parks, particularly at supermarkets.

The other 'Flex' technologies include a FlexRail storage centre console between the front seats and FlexSpace rear seating where the 40:20:40 split rear seats slide fore and aft for optimum legroom; and if the narrower centre seat is not being used, the outer ones can slide inwards to improve shoulder room. The load space in the longer new Meriva is good as well, ranging from 400 litres with the rear seats in use to 920 litres up to the window level with the rear seats folded and a maximum 1,500 litres if the car is loaded to the roof.

So the new Meriva is a user-friendly and versatile package with a wide range of engine options. During the UK media press launch, only two engine options were available as the car does not go on sale for a few weeks (June 2010). There was the main-selling 1.4-litre turbocharged 118bhp petrol unit and the same capacity turbocharged 138bhp engine.

Do not be put off by the turbocharging aspect. Modern direct injection, smaller capacity petrol engines with variable valve and variable fuel injection timings boosted by turbochargers are the answer to engine downsizing. They provide more power, improved fuel consumption and better torque than the larger units they replace.

The 118bhp engine produces 129lb ft of torque from 1,750rpm giving the driving characteristic of a turbodiesel unit. Average fuel economy is 46.3mpg but unfortunately I cannot give you an actual real-life figure as the best-selling Exclusive model I tried, although it has an on-board computer, strangely doesn't include an average miles-per-gallon readout. I suspect that 40+mpg will be realistically possible. The 1.4 turbo 138bhp/147lb ft petrol engine with SE trim did have the fuel consumption readout: officially its combined figure is 42.2mpg but in real life my test car returned 32.7mpg.

Both engines are fine for most people but they can be harsh and noisy when pushed. The 118bhp unit did run out of puff on hills to some extent and the car wasn't loaded. The 138bhp was more responsive and, of course, gave a sportier drive but it costs Ł775 more and the annual road tax bill is Ł155 against the Ł125 of the 118bhp unit. The Meriva is a very smart car so I'm sure Meriva owners will make their own smart choice.

Ride comfort was good and stability was fine although it is a tall car and there was some body roll during cornering but not enough to unsettle the car or its passengers so perhaps the age old cry of "Are we there yet" will now be a thing of the past.

Against? The increase in price and size might deter current Meriva owners from trading up to the new model, engine noise when pressing on, wind noise from the rear side door seals and the fact that the wide opening side doors are limited in their use in some car parking spaces. For: roomier than the previous model, better specification, better quality, better rear seat access and generally a much more clever vehicle. — David Miles