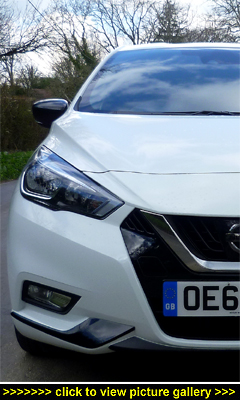 “Warm is often better than hot.
While a hot hatchback will bag you
the three ‘B’s (a bruising ride, boy-
racer sound effects and bling),
a warm one will often come with
the three ‘C’s: comfort, chic styling
and cutting performance. Time to
drive Nissan’s satisfyingly ‘warm’
Micra — the new N-Sport...”

AND IT'S JUST UPPED ITS GAME thanks to a new 115bhp (117PS) 1.0-litre turboed three-pot petrol motor along with sharper steering and some effective chassis tweaks for when the game's afoot.

Looks-wise, the N-Sport is decidedly more hot than warm and as eye-candy goes it's a racy little number. Rolling on black 17-inch alloy wheels and riding 10mm lower than the standard Micra with a meaner stance, the N-Sport's thrusting nose, sleek profile and dramatic high-tail design, all underscored by swoopy angular lines and visually emboldened by gloss black and carbon-effect exterior detailing, comes together to create a sporty body language that gives it the right to sit alongside the brand's other hotshots: Juke Nismo, 370Z and, of course, the sizzling GT-R.

The new three-cylinder 999cc engine under the N-Sport's bonnet is a game-changer so far as the Micra is concerned, particularly in the highest state of tune which gets it 115bhp instead of 98bhp. Backing up the power is 132lb ft of torque — for short periods an overboost function ramps this up to 147lb ft.

Don't bother arguing that that's a long way from many hot hatches' output figures because to do so totally misses the point of Nissan's newly-warmed hatch. Spec-wise the engine is impressive with variable valve timing, an electronically-actuated turbocharger, and forged steel crankshaft.

In action it's a peppy performer with linear power delivery and its wide torque band (1,750 to 4,000rpm) means it doesn't have to be thrashed to do more than just keep up with traffic — there's more than enough grunt to take you off the line to hit 62mph in 9.9 seconds before serving up a 121mph top speed.

Extracting the max from the smooth-revving three-pot is no hardship — the slick-changing gearlever makes it easy to swap ratios cleanly, ensuring that, if that's how you like it to be, the N-Sport is always up for it. Drive it hard and you'll find its sweet spot is in the useful mid-range although it will gleefully spin past 6K and never feels out of its depth; but ease off and you'll find it to be as agreeably restful pootling and it is refreshingly refined cruising motorways at the legal limit.

Despite its willingness to play along, the three-pot doesn't penalise drivers with a heavy right foot. The 115bhp unit is more efficient than you might have hoped: its official combined cycle figure is a wallet-friendly 47.9mpg that in real-life translates to the impressive 46.2mpg we recorded over the course of a week's hard testing.

Get past the thrusting looks and there's more that's new including a new infotainment unit in the middle of the soft-touch, Alcantara suede-fronted fascia. Suede also skins the supportive front seats, partnered smartly with leather; they're lightly bolstered but enough to keep you located. Flashes of white surround the air vents and mark out the seat centre panels, and there's silver-grey overstitching — overall the cabin is smart and inviting with a satisfying degree of perceived quality.

Bluetooth and a DAB digital radio are on hand for sounds and there's a USB port for iPod connection along with an AUX socket for an MP3 player. The views from the rearview camera (with active guide lines) also appear on the display.

Space in the front cabin is good with, despite the visually low roofline, a fist-and-a-half of headroom. The driver's seat adjusts for height and the three-spoke steering wheel is sportily flat-bottomed, good to grip, and multifunction. The trad-look white-on-black dials are easy on the eye and separated by a multi-mode screen displaying all driver information and which, very helpfully, shows both the posted limit and, directly below it, a digital readout of your actual road speed.

Unlocking and driving away are streamlined by Nissan's Intelligent Key feature and a push button Start. The rotary AirCon controls are also easy to reach and use on the move whiile in-cabin storage is up to the job with a deep box beneath the front centre armrest, roomy bottle-holding door pockets, centre stack 'cave', twin cupholders alongside the pull-up handbrake, and a large glovebox.

Once you've spotted the well concealed door handle set high up in the rear door frame — which places it, rather conveniently, at near-roof level — you can get aboard and settle in the suede-trimmed back seat.

Three can be accommodated side by side although two adults will always be more comfortable — a rule that applies to even the most expensive cars. Leg and knee room is okay and there's decent foot room even for size tens too, plus the backrests are set at a relaxing recline. Privacy glass is dark enough to throw the paparazzi off the scent and there are front seatback storage pouches along with usable door bins. Oh, and because you sit six inches higher than those ahead of you, interesting views out can be to the front or out of the sides.

The N-Sport, thankfully not having any pretensions to be a hardcore hot hatch, rewards those travelling in it with decent everyday comfort courtesy of a ride that doesn't harm the handling suppleness yet that remains composed even over the bumpy bits. Like the ride:handling mix, the N-Sport's comfort:grip blend is well considered: the 205/45-profile Bridgestones offers plenty of traction while not being so lo-pro as to be rubber bands only fit for trackdays.

Firmed-up and tuned for more 'fun', the upgraded suspension and quicker, weightier steering make themselves known the moment you point the N-Sport's sculpted nose into a bend — there's an extra degree of composure on the twisties; this N-Sport is good to drive and a step-up from the standard car's already respectable handling dynamics.

However you're driving, this sportified Micra feels agile and composed and should you unintentionally over-egg it the N-Sport's nose will run wide but with ample warning for you to recover your line. The good driving position comes with fine visibility (and not just to the front and sides but also rearwards) making it easy to place accurately and complements its chuckability — and Yes, it's definitely 'warm' enough to give the competition (including the likes of Ford's sporty Fiestas) a run for their money.

Given that it measures just 3,999mm nose-to-tail and has plenty of cabin space, the N-Sport's deep 300-litre boot is a bonus (in fact it beats most of its peers, some of whom come from the class above). Drop the 60:40-split rear backrests and you'll open up a 1,004-litre loadbay.

Loading is made easier by the lightweight rear parcel shelf-cum-load cover and although there's a short lip to load over it's not a problem and par for the course for hatchbacks. Isofix child seat anchorage points are standard-fit (both outer back seats and also for the front passenger seat) and while you may not have expected it to tow it can, surprisingly, pull a braked 1,200kg.

Stylish and polished — both in character and dynamically — the Micra N-Sport ticks a lot of boxes for those wanting to add another layer to their motoring, especially if that includes some smile-inducing driving. ~ MotorBar