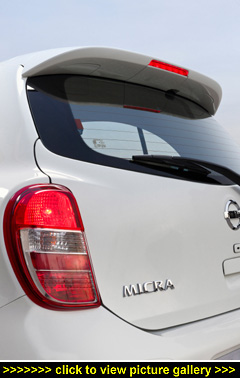 “Nissan is on a ‘super charge’
with its latest Micra, the 1.2 DIG-S
Supercharged — a small city-car
that packs a performance punch...”

FOLLOWING HOT ON THE HEELS of the latest generation Micra automatic, which went on sale in early 2011, the petrol-drinking supercharged Micra comes with a five-speed manual gearbox to widen the appeal of this versatile, cheap-to-buy-and-run, five-door city-hatch.

The Micra's 1,198cc direct injection, three-cylinder petrol engine is fitted with a small supercharger that not only boosts power over the standard engine by 22% to deliver 96bhp but in the process improves driveability and economy as well as keeping emissions below the tax-critical 100g/km ceiling.

As you'd expect, the DIG-S is equipped with stop & start technology along with a regenerative alternator to minimise fuel wastage. The three-pot engine serves up the performance usually found in a normally-aspirated 1.5-litre petrol engine: a top speed of 112mph and 0-62mph done and dusted in 11.3 seconds.

But it does so with the economy usually found in a diesel unit: Nissan claims the DIG-S will return 54.3mpg in the urban cycle; an extra-urban consumption of 76.4mpg; and a combined 65.7mpg.

With zero road tax and exclusion from London's congestion charging in its favour, as well as the cost of fuel now that diesel is more expensive than petrol, Nissan believes the DIG-S will attract more buyers to the brand.

The DIG-S dresses in a more aerodynamic body with some subtle changes to the front and rear ends. Equipment depends on which of the three trim grades is chosen: Visia (Ł11,150), Acenta (Ł12,150) or Tekna (Ł13,650).

First impressions are good. The three-cylinder 1.2-litre engine is surprisingly smooth and, enhanced by the supercharger, remarkably lively and responsive — there's no hesitation in getting away, keeping the momentum going or supplying more power when you need it.

The light and direct five-speed manual 'box is a good match thanks to its ease and precision although more than once I wished for a sixth gear, particularly on a long stretch of motorway.

While the engine gave no audible signs of stress at higher speeds, a glance at the hit the fuel consumption had taken (compared to the give-and-take conditions on semi-urban roads) highlights that the DIG-S is in its element at lower speeds — overall I managed 47.7mpg against the official combined figure of 65.7mpg.

A very tight turning circle (of just 4.65m) underscores the supercharged Micra's urban credentials without making it too twitchy at speed; the adjustable steering column is convenient and the brakes are very smooth and powerful for this size of car.

The seats are supportive and ride quality is reasonably good — the DIG-S did roll noticeably on tighter bends but nevertheless feels agile. Visibility is very good and general noise levels are all very low although there is noise intrusion from the suspension.

With ample oomph, low emissions, low taxes and high levels of equipment, the Micra DIG-S is a sophisticated small car and a definite front-runner for commuting. — Robin Roberts