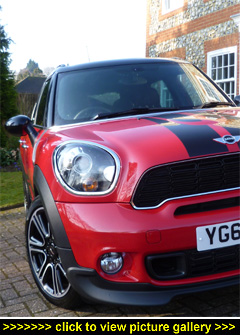 LIFT THE WIDE-STRIPED BONNET and you'll find a 1.6-litre four-cylinder petrol engine that kicks out a turbocharged 215bhp and 207lb ft (a gutsy 221lb ft in overboost mode) of torque.

Performance is licence-threatening: 140mph and seven seconds to hit the benchmark 62mph from standstill. However, 'potent' doesn't necessarily mean you'll be penalised at the pumps — thanks to MINI's 'MINImalism' technology, including Brake Energy Regeneration, Gear Shift Indicator, Auto Start-Stop function and Electric Power Steering, this powerplant is, given its performance levels, impressively efficient.

Officially, this JCW-tuned motor can average 38.2mpg with 30.1 in town and as much as 45.6mpg touring, when the 10-gallon (47 litres) tank should keep you off forecourts for 400+ miles. We're not that angelic but even so our hard-pressed, town-centred week's testing saw an average of 31.4mpg.

As well as being the most powerful MINI, this John Cooper Works Countryman ALL4 is also the most expensive MINI — Ł28,605. But for your money you do get presence with a capital P. While the Countryman already stands out in the ever-growing MINI family due to its not so 'mini' proportions (4,133 millimetres long, 1,789mm wide and 1,549mm tall), the JCW-enhanced ALL4's even-beefier looks definitely push it up a notch in the muscularity stakes.

Marked out by short overhangs, a high waistline, wheel arches packed out with extra-lightweight 18-inch twin-spoke light-alloy wheels and red brake callipers, and a strongly-defined over-the-wheel stance, the John Cooper Works Countryman effervesces with a 'take-no-prisoners' menace. For the aficionado, identifying branding includes the John Cooper Works badges on the radiator grille and tailgate, and red-backed, anthracite-coloured side indicator surrounds on the diagonal link between the A-pillars and the front wheel arches.

Also catching the eye is the contrast paint finish for the roof and exterior mirrors, which can be in the red shade exclusive to JCW or white or black. The aerodynamic rear roof spoiler plus bespoke side skirts, as well as side stripes and the gorgeous black-painted alloys with their polished 'freshly-shaved' spokes, all equally draw attention.

But let's not get carried away with the visual showmanship — the JCW ALL4's road-hugging appearance is more about Go than Show. While being closer to the ground (it rides 10mm lower than the already low standard-issue Cooper S Countryman) and running a sports suspension (firmly tuned springs and dampers plus strengthened anti-roll bars) does generate a firmer ride.

We've seen a few other reviews that criticise the ride as excessively hard — for the record we had no gripes about the ride of our JCW ALL4. Lower and firmer it may be, but the view down the road from the driver's seat hasn't changed one jot — it's still one to be savoured.

Following on from a string of impressive performances in the World Rally Championship, the John Cooper Works Countryman is the first JCW MINI to come with ALL4 permanent all-wheel drive.

The drive-power 'split' is varied seamlessly between the front and rear axles by an electromagnetic centre diff which, as and when required, can send 100% to either end. Dynamic Stability Control, Dynamic Traction Control and Electronic Differential Lock Control are linked up to ALL4 — the result is that the Mini's go-kart handling can now be indulged with a new maxed-out intensity. More about this later…

When it comes to MINI practicality and versatility, the Countryman is already a winner. Four side doors guarantee easy access to the cabin which can, incidentally, be ordered with four or five seats (three-seater rear bench or no-cost option of two individual back chairs).

Drive a Countryman and you'll be at no risk of getting cabin fever; the opposite, in fact — you may not want to get out again! The usual idiosyncratic MINI design touches, along with more exclusive John Cooper Works detailing, add plenty of interest to the airy interior. The trim materials have a high-quality feel, and it's all put together very neatly.

Nice touches include a stand-alone rev-counter mounted on the steering column so it's always clearly visible wherever you set the wheel position — and there's plenty of reach and rake available. These days it's also good to find a car whose wipers clean every inch of the screen — this Countryman's do!

More good features: chrome and black 'every which way' eyeball air vents that ensure whatever temperature air you dial up is delivered exactly where you want it; A1 visibility to the front and sides — even rearwards through the tailgate glass is unexpectedly good; and the ambient lighting in the roof can be tailored to any mood with a choice of six colours. Plus we liked the new-style manual handbrake that's so much easier to use than a traditional one and will satisfy all those old school drivers who don't seem to like electric parking brakes.

The standard-fit 40:20:40 split rear bench can be slid fore and aft — good news for optimising space for passengers and or cargo.

Those consigned to the back seats fare well with very generous headroom and decent knee and foot room; they also enjoy a large centre armrest as well as adjustable seatbacks — set them upright for maximum boot space or recline them for passengers. And that family-relevant $64,000 question: Can a third person travel in the rear centre seat? Yes. And more comfortably than usual.

Accessed through a large tailgate, boot capacity remains the same 350 litres as found in other Countryman models — and, like them, the rear backrests can be easily folded flat to extend the loadbay to a handy 1,170 litres (the loadbay floor measures a useful 55 x 42 inches). There's also a large load-through hatch and MINI have even managed to fit a large storage tray (37 x 20 inches and 7 inches deep) under the boot floor.

Practicality is all very nice but let's be honest; you won't be buying a John Cooper Works ALL4 just for the satisfaction of squeezing in a few more suitcases or some extra traction in the occasional spot of snow. You may as well admit it because everyone knows that what you're really after is some extreme on-road driving fun and that distinctive 'on-track' feel served up by a really quick MINI.

And you won't be disappointed. The sports exhaust provides a go-faster soundtrack — and while it's not quite as rorty as you'd expect from a John Cooper Works machine it's nevertheless a track MINI fans will enjoy listening to again and again. Dynamically, the flat-riding ALL4 JCW feels reassuringly poised, whether you're tootling along in top gear or blasting down a challenging back road.

Keeping up the momentum requires no needless juggling of gears — with 207lb ft (221lb ft in overboost, remember) between 1,900 and 5,000rpm, you'll never find yourself short of grunt. Even at the legal limit in 6th gear — where it's quiet and refined — there's plenty of oomph in reserve without changing. Whenever you need to swap cogs rapidly, satisfaction is guaranteed with no fear of a baulked change. If you prefer, a six-speed automatic gearbox with Steptronic function and steering wheel shift-paddles is available as an option.

Making it all even more agreeable is the Sport button — press it and the throttle response is instantly crisper and the steering weights up. We found ourselves using this a lot because the 1.6-litre engine feels nicely 'on the boil' and overtaking manoeuvres are a breeze.

The bright red brake callipers are there to be used; prod the pedal and you'll be rewarded with powerful but progressive stopping. The speed-sensitive electrically-assisted steering is direct; and the small-ish leather-wrapped JCW sports steering wheel is perfectly-sized for the cabin (and having fun!).

And, travelling fast or slow, the very supportive, figure-hugging, leather-upholstered sports seat will keep you steadfastly in command. And should the weather change for the worse, it won't cramp your style — or your driving satisfaction.

The MINI DNA is strong in this John Cooper Works-fettled Countryman — treat it as a rapid, grippy and chuckable hot hatch and you won't go far wrong. However, it goes deeper than that — there's an air of 'seen it, done it, got the T-shirt' about it so there's nothing to prove in the hot hatch stakes, leaving the JCW ALL4 free to get on with 'the biz' in a more grown up kind of way with no distractions as it grips and goes. Fast. — MotorBar