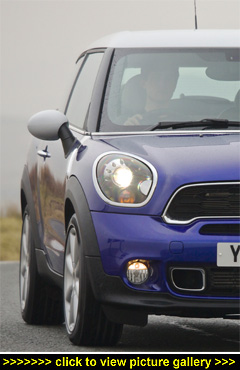 “MINI really is spoiling drivers for
choice: in addition to the Hatch,
Convertible, Clubman, Countryman,
Coupe and Roadster models there’s
now a seventh member of the MINI
clan — the three-door Paceman,
priced from Ł18,970...”

WHAT IS THE PACEMAN all about? On the face-of-it, it seems like overkill to have yet another version of the MINI but ever-increasing global demand probably disproves that. MINI do not give sales predictions for new models, but the Countryman, on which the Paceman is based, registered nearly 15,500 UK sales last year making it the best-selling version after the iconic MINI Hatch.

Paceman customers have the choice of a quartet of mainstream four-cylinder engines: two petrol and two diesels. All come with a six-speed manual gearbox — a six-speed Steptronic automatic transmission with manual control can also be specified.

There's also the niche-selling John Cooper Works high-performance petrol variant, and the price can be pushed up further with MINI offering their usual array of extra-cost option packs and a wide range of additional kit — personalisation is an important part of MINI ownership.

For those who prefer diesel in their tanks there's a Cooper D version which uses a 112bhp turbocharged 1.6-litre engine that hits 62mph from standstill in 10.8 seconds. It benefits from a frugal 64.2mpg thirst and 115g/km emissions. The flagship diesel is the Cooper SD which gets a 2.0-litre 143bhp engine and delivers 0-62mph in 9.2 seconds along with 61.4mpg.

For buyers who want the reassuring grip that comes with four-wheel drive, MINI's ALL4 system is now available on the Cooper D and SD diesels and the Cooper and Cooper S petrol models.

Although styled as a coupe interpretation of the bulbous and chunky Countryman, the Paceman has all the key design cues that link it to the rest of the range. Its three-door body, with its lowered roofline to the tail, looks less of a MINI on steroids than the Countryman.

It also uses the same platform as the five-door Countryman and its overall length — ranging from 4,109mm to 4,115mm depending on the version — is almost identical to that of its five-door sibling.

The Paceman, says MINI, has been created to appeal to a 'new type of design-conscious customer'. It's certainly a case of design over functionality as three-door coupes are never that easy to live with in terms of practicality (getting rear seat passengers in and out of the car) and the wide-opening front doors are a real pain when it comes to opening them fully in tightly packed car parks.

The Paceman only has two individual 'lounge'-type seats in the rear — it's 'snug' back there with headroom for tall passengers and legroom both tight. A two-section version of the MINI Centre Rail storage and attachment system (first seen in the Countryman) comes as standard.

Although a strict four-seater, the Paceman does offer some practicality for load carrying as the two individual rear seats fold down (but not completely flat) to expand the 330-litre boot space up to 1,080 litres. Loading access is via a relatively large, high-opening tailgate.

In the front, the raised seating position gives the driver and passenger good vision to the front and sides although the lower coupe roof is visually a bit restrictive at the rear corners.

The instruments and controls will be familiar to MINI drivers, including the signature large round central speedo. However, its black surround and decorative inner rings in high-gloss black or chrome are new, as too are the redesigned air vent surrounds. Buttons for the windows — which have been fiddly toggle switches below the speedo on every BMW-built MINI to date — have, thankfully, been moved to the door trim panels.

The distinctive Paceman is easy to identify amongst other MINIs. While style definitely rules function, the Paceman looks a better balanced and svelte version than the 'chubby' Countryman.

Who will buy a Paceman? Youthful singles or couples as well as older young-at-hearts for whom the appeal of fashionable and designer brands extends to their transport. Of course the Paceman is a global vehicle, so who buys in the UK might not be the same as who buys in other markets. The ALL4 versions will have appeal for customers who need 4x4 traction during winter months and do not want a large SUV.

The Paceman is unique in its offering but obvious premium brand competitors are the new Audi A3 (for two-wheel drive customers) and, for those wanting a 4x4, the larger Range Rover Evoque three-door coupe.

And, as expected, the 4x4 system does sap some of this power and the long-legged gearing needed for low-ish emissions does inhibit sporty mid-range acceleration and responsiveness. Top speed is a modest 122mph with zero to 62mph taking 9.3 seconds. Officially this version will return 57.6mpg but my test drive week covering all types of roads and traffic conditions returned only 43.9mpg — not that impressive for a car of this size.

This road test has been all about the Paceman's design more than its performance because, technically, it doesn't bring anything new to the ever-expanding MINI range. The go-kart handling remains but, like the Countryman (and especially the ALL4 versions), the ride quality and refinement is not as good as that of other MINI models.

One would have to say that the Paceman is expensive for what it is. It also lacks midrange pace and engine response, has a fidgety ride with road noise intrusion, has less headroom (but easier rear seat access) than a MINI Hatch and its real-life fuel economy is not great. And there's no spare wheel.

However, the 'plusses' carry weight: racy styling, more rear seat legroom and boot space than a MINI Hatch, and an all-wheel drive option for those who need to 'get a grip'.

So, more practical than the Hatch but not quite as much as the five-door Countryman. All other considerations aside, for me the Paceman is the most stylish model in the MINI range. And for many buyers, that will be all the recommendation it needs. — David Miles