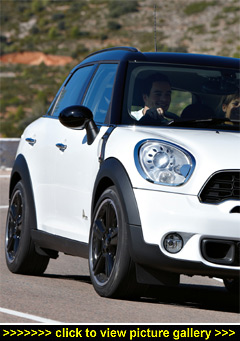 “The MINI range is going maxi with
models as the fourth addition to the
range — the Countryman — goes
on sale on 18 September. The latest
version follows the MINI Hatch,
Convertible and Clubman variants.
All the UK’s allocation of Countryman
models is already sold out for this
year and order books are already
filling up for next year when around
15,000 units should be available...”

THE NEW COUNTRYMAN is available with 1.6-litre petrol and diesel engines and with the option of two- and four-wheel drive versions. Prices range from Ł16,000 to Ł20,810 for two-wheel drive models and up to Ł23,580 for the ALL4 versions with an automatic gearbox.

All 2,500 units scheduled for the UK market this year are already sold but around 15,000 will be available for UK customers next year. MINI expects 75-80% of sales will be to conquest customers: 70% will be retail buyers; 70% will choose petrol-powered models; initially 85% of customers have ordered ALL4 version but in the longer term 60% of users will choose the less costly two-wheel drive versions.

The likely single best-selling model will be the Cooper 122hp petrol, two-wheel drive version priced at Ł17,495. The new ALL4 four-wheel drive system adds Ł1,065 to the cost of a Cooper D (diesel) and Ł1,220 to a Cooper S.

All versions come with a six-speed manual transmission as standard but a six-speed automatic is available for all petrol models now, and for the Cooper D Countryman from March 2011.

Unlike the other three MINI versions (Hatch, Convertible and Clubman), which are built in the UK at Oxford, the Countryman is built by Magna Styr in Austria who also build BMW's X3 4x4 model. Future MINI two-seater Coupe and Roadster models due in 2011 and 2012 respectively will be built at the Oxford Plant when the MINI range becomes a 'six-pack'.

With four doors and options of four or five seating layouts, plus a rear tailgate, the Countryman is, at 4,097mm in length with a height of 1,561mm and a width of 1,789mm, the biggest MINI/Mini ever in its 51-year history. For the record, Cooper S models measure 23mm longer — at 4,110mm. And with 350 litres of boot space with the rear seats in use, the Countryman offers 190 litres more boot space than a MINI Hatch and 90 litres more than a Clubman. With them folded, the Countryman offers a maximum 1,170 litres of cargo space.

The Countryman is aimed at the increasingly popular 'crossover' sector, appealing to those who live in the country and want a versatile premium brand all-wheel drive model with more space as well as those urban users who fancy a rural type motoring lifestyle — hence the expectation that up to 80% of customers will be new to the MINI brand.

All manual transmission models have Auto Stop/Start as standard and Brake Energy Regeneration to charge the battery is standard across the range, as too is ESP electronic stability control.

Featuring that signature wheel-at-each-corner stance with short overhangs, the Countryman not only has larger dimensions than its cousins but also a higher ride height. This provides the command driving position preferred by many drivers and also provides a 10mm higher ground clearance for soft off-road driving.

Many design characteristics are classic MINI, such as the high window line surrounding the cabin; others are new interpretations of iconic features. For example: the roofline with roof rails; the reinterpretation of the hexagonal radiator grille on the Cooper S models; and the prominent headlight units integrated into the bonnet.

The front of the Countryman is more upright, projecting a bolder 'face', which also offers improved pedestrian safety. The wheel arches are more flared, highlighting the robust nature of the Countryman as a crossover and its soft off-road ability while the design of the wide-opening tailgate offers easy access to the large boot space.

Inside, the MINI Countryman is all about comfort, practicality and innovative style — with a 'premium' feel. The higher seating position offers better visibility for the driver and passengers; a feature particularly appreciated by children. The multi-function rear seats are arranged with a 60:40 split base for the three rear seat passengers and both rear seat squabs are also individually adjustable, sliding back or forth by 130mm to make the best use of space. The backrests, by contrast, are arranged in a 40:20:40 split that provides absolute flexibility with all three seatbacks capable of folding flat in any combination.

The interior is dominated by iconic MINI design characteristics such as comfortable optional sports seats, the trademark huge central speedometer and modern switchgear. New elements of MINI design language are introduced with the elliptical interior door trims that continue from the front to the rear door and back.

Also new is the MINI Centre Rail system. When ordered as a four-seat configuration, in place of the conventional centre console the U-shaped Centre Rail runs from front to rear down the centreline of the Countryman and opens up new, individual options for integrating all kinds of storage boxes, cup holders, power chargers, music players, mobile phones and other accessories such as a sunglasses case. When ordered with the rear bench seat, as is standard in the UK, the Centre Rail stops between the driver and passenger seats.

At launch the Countryman range will include three petrol — MINI One, Cooper and Cooper — and two diesel models (MINI One D and Cooper D) as well as two ALL4 all-wheel drive models: the Cooper D ALL4 and Cooper S ALL4.

Each model is equipped with an entirely new generation of power units. The petrol engines are the new 1.6-litre four-cylinder powerplants already announced for the Hatch, Convertible and Clubman models. These free-revving and refined units are available with 98, 122 and 184bhp (as reviewed here) outputs with CO2 emissions ranging from 139 to 180g/km. They all feature Variable Valve Timing, similar to the BMW Valvetronic system, and produces more low down torque and better response. Certainly necessary characteristics needed as the larger Countryman feels a much heavier and less agile car than other MINIs.

The diesel models are powered by an all-new BMW 1.6 litre four-cylinder turbocharged unit with 90 and 112bhp power outputs with CO2 emissions of 115-129g/km and fuel economy quoted as 64.2mpg (57.6mpg for the all-wheel drive version). The lightweight aluminium engines use common-rail direct injection and a turbocharger with variable turbine geometry.

The main attention-grabbing news is, of course, the use of all-wheel drive as an option for the Countryman. This is the first time in MINI's history that all-wheel drive is on offer. Initially, two versions — the MINI Cooper D and Cooper S — will have the ALL4 option while a MINI Cooper ALL4 version will follow in 2012.

No one needs four-wheel drive to be active all the time so MINI has a typically smart and fuel-efficient answer. The Countryman ALL4 is a front-wheel drive car in most normal circumstances, but when any slip is detected on the front wheels — or if the car is being driven enthusiastically! — an electro-magnetic clutch, located on the rear axle, engages drive to the rear wheels to improve traction.

Dynamic Traction Control allows controlled slip through the driven wheels to aid moving off on loose sand or deep snow. DTC is a standard feature on the two ALL4 models and the front-wheel drive MINI Cooper S Countryman, and is also available as an option for the other models.

When the stability system is deactivated (in 'DSC Off' mode) an electronic locking function for the front axle differential comes into play. In tight corners it brakes a spinning wheel as required to reduce slip and enhance handling. Known as Electronic Differential Lock Control, this system enhances the car's traction without adversely affecting its steering properties.

Bearing in mind Winter is on its way and not forgetting the ice and snow which brought our roads to a standstill last Winter, the demand for Countryman ALL4 versions is very high. Demand for crossovers is equally good as customers return to buying SUVs — the Countryman is definitely arriving at the right time.

But it is quite a different sort of MINI. Yes it still adopts the go-kart image of a wheel at every corner and Yes, it is relatively compact so it's easy to park — but it feels significantly more substantial: MINI but not as we know it.

Where MINI wasn't big enough for some families it now is, but the unique lightweight agility has become bulky and somewhat ponderous. It is certainly comfortable and offers a relaxed ride and that will appeal to owners outside the normal circle of MINI customers.

The downside is that the Countryman loses MINI's renowned agility; the upside it that gains all-wheel drive. Although costly to buy, the purchase price is offset by the highest residual values. Reasons to buy include the desirable image, all-wheel drive option, new and responsive engines, very well equipped and a comfortable ride. A MINI but not as we have known it perhaps, but its must-have desirability for affluent customers new to the brand will be significant. — David Miles