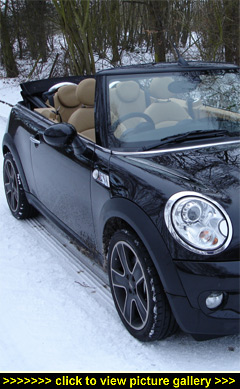 “Émile Coué coined the phrase ‘every
day, in every way, I’m getting better
and better’. Just thinking on that
brings to mind the MINI — it, too, just
keeps getting better and better...”

MINI HAS BEEN PROGRESSIVELY IMPROVING THE BREED with each new generation ever since the first BMW-era model hit the streets running in 2004. And now we have the very latest Convertible — the best 'open all hours' drop-top on the market. Or is it?

We hadn't planned it but our test MINI Cooper S Convertible arrived the day before the snow fell in what was, according to the record-keepers, 'the worst winter for thirty years'. At the time we weren't sure whether it was good news or bad news. And never having had to drive a MINI in the snow before, it was to be a baptism by ice rather than fire.

But there's that 'fun' word again. The best thing you can do in a convertible is to drive it topless on a dark summer's night. Dim the instrument lighting as far down as it goes and the sensation is what ancient witches must have experienced on their broomsticks, albeit without the MINI's superior grip, handling and wind-protection.

Top down, heated seats and heater switched to max, an open-to-the-elements MINI on a zero-temperature winter's day is as entertaining as it comes.

Top up, it's as snug and weatherproof as the all-of-a-piece, metal-roofed hatches. And, thanks to the powered top being canvas, drop-down time is a breezy 15 seconds. Although it can be fully opened or fully closed at speeds of up to 20mph, we wouldn't recommend it as you need to keep your finger on the switch. For blustery days you may prefer to restrict yourself to using the sliding front section of the soft-top as a 'sunroof' although at speed this can be rather noisy. But do we care? It can also be opened and closed at speeds of up to 75mph.

More good news about the roof is that gone are the bulky roll-over hoops behind the rear seats, replaced now with a more discreet electromechanically-operated roll-over bar that pops up if the need arises in just millionths of a second — faster than the 'blink of an eye'. Not only does the new chrome plated system look far smarter but there's the added bonus of improved top-down rear visibility. It should be noted that with the top-up the rear three-quarter vision is restricted and makes reversing tricky — so good news that rear parking sensors are standard-fit items on the Cooper S.

Thankfully we also had a few days without snow so we could explore the latest generation Convertible S's dynamics on the type of roads that it will experience during most of the year. The Convertible's body is now stiffer and, combined with the keen electric power steering and the marque's bankable kart-like handling, the point-and-squirt 'S' has simply got better.

Not only is it undeniably a very game and sporty little number, the ride also seems to have become a tad smoother; particularly noticeable on poorer quality roads. However, you'll be in no doubt whatsoever if you're potholed or speed humped in the Cooper S.

The cabin is as iconically MINI-ish as ever with the same XL-sized central speedometer-cum-driver's computer-cum music centre and toggle switches — all of which call for the driver to glance down to operate, although no doubt longer acquaintance minimises this.

The MINI is smartly trimmed and features a good smattering of quality chrome highlights and the Sport seats are supportive, particularly around the upper back and mid-thigh, holding you in place despite not being hard-core rally items. And getting in and out of he front is easy: even one of MotorBar's tester's mother — who's over ninety — managed it without a grumble!

You also sit close to the road, which is good. And for the average person the window base line falls at mid-upper arm level so you don't feel you've been swallowed by the car, and also forward/side visibility remains very good.

Rear seat passengers can be accommodated snugly for long journeys but with two near-six-footers in the front, adults in the back could feel a bit squashed as there's no foot room under the front seats.

Roof raised, the cabin is not the rorty place you might expect and is virtually as calm as the metal-roofed MINI hatches. Some might not like it so I'll just whisper it: the latest Convertible is more civilised than any of its forbears. The ladies will, of course, welcome the news and as they buy seven out of every ten MINIs, their approbation definitely counts.

The turboed 1.6-litre under the bonnet scoop is a new four-cylinder petrol engine, mated to a six-speed manual 'box complete with a range of technical features serving to optimise both fuel economy and emissions including Brake Energy Regeneration, Shift Point Display and the Auto Start/Stop system that switches off the engine when you're stationary and shift into neutral. This takes the lion's share of the credit for reducing the 181bhp Cooper S's CO2 exhaust gasses down to a greener 139g/km. As the emissions have gone down so the fuel economy has gone up — to 47.1mpg on the combined cycle. Eight days and seven nights with our Cooper S Convertible saw a surprisingly good (given the amount of low-gear snow work) average consumption figure of 33.1mpg. And we didn't spare the horses.

Despite these gains, the Cooper S is as fast as it ever was: max speed is 140mph and it will sprint to 62mph from standstill in 7.3 seconds. Torque is a 177lb ft but with overboost you can extract as much as 192lb ft. Enough to generate a little scrabble from the front end if you Meatloaf it and take off like a bat out of hell. It's a characterful little number, the turboed 1.6 — smooth and willing and eager to play along if you want to make best use of the six gears. Satisfyingly short throws add to the enjoyment but you need to be positive in your shifting to obtain the cleanest changes. Press the Sport button ahead of the gearlever and the steering is sharpened up.

While it's a grippy player that's more than game for a laugh, MINI has added some back-up for over-exuberant pilots: namely ABS with Brake Assist, Electronic Brakeforce Distribution, Cornering Brake Control and Dynamic Stability Control. All there to ensure things never get irredeemably out of hand. Brakes, incidentally, are disc all round and vented at the front and do their job admirably.

So, much the same only better. There are some styling changes to the exterior but so subtle only a side-by-side comparison will reveal them. Never asking a lady if she's had a facelift applies as much to cars as it does Hollywood A-listers. The 'S' Convertible remains a practical and entertaining driving machine that keeps the fun coming top-up or top-down. And Yes, snow, rain, wind or shine the top stayed off. — MotorBar