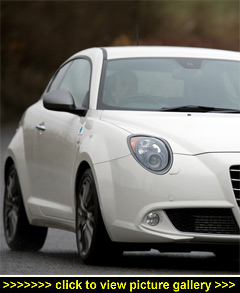 Initially, the new Euro V 1.4-litre MultiAir petrol engine is offered in two turbocharged forms for the UK market — the 135bhp version powers the Ł15,165 Lusso and Ł16,135 Veloce with a top speed of 129mph and a 0-62mph time of 8.2 or 8.4 seconds (depending on the trim and equipment specification). The Combined Cycle fuel economy is 50.4 to 51.4mpg, CO2 emissions are 128-129g/km, again depending on the model. A new six-speed, twin-clutch automatic transmission is also available with this engine.

In addition to MultiAir, the new MiTo range showcases more innovative technologies, including active suspension on the Cloverleaf variant, which is claimed to be a first in this segment.

All new MiTos have the emission-reducing Start&Stop system and the Alfa Romeo DNA function. This is derived from motorsport and the three-mode electronic system communicates with the engine, brakes, steering, suspension (on MiTo Cloverleaf) and transmission, allowing the driver to adjust the responses of the car to suit their personal driving style and road conditions.

Alfa's Electronic Q2 limited slip differential, which reduces torque-steer, heads a number of dynamic driver aids including a long list of safety systems for the new models. Other improvements cover the interior finish, trim combinations and gearchange quality as well as modifications to the steering, suspension and braking systems.

To be able to obtain so much useable power and, importantly, responsive torque from relatively small capacity 1.4-litre, four-cylinder petrol engines is utterly remarkable. Just as impressive is the refinement and lack of stressed harshness when the engine is worked really hard. Also, it's technology which offers the best of both worlds because driving these units at slow speeds in town is effortless and not, as you might expect, in the slightest temperamental.

I think the 135bhp unit is going to be the best choice for most people. It feels strong, it is quiet and with a real-life fuel consumption figure of 42.6mpg recorded during my test driving in Scotland there is nothing to complain about. Maximum torque of 152lb ft (manual gearbox models) is available from just 1,750rpm — that's turbodiesel territory.

This same engine, if used with the new six-speed automatic twin-clutch gearbox, also has 169lb ft of torque from 1,750rpm so it is still responsive and, interestingly, marginally better for fuel economy and lower CO2 emissions — but only by a whisker.

The 170bhp unit in the Cloverleaf version is equally as good with 184lb ft of torque developed from 2,500rpm. This unit will be a fine choice for the fast driving enthusiast. The test drive fuel consumption was 33.1mpg — still very much acceptable for this performance.

Equally impressive are the improvements this second-generation MiTo offers in the way of ride comfort and much-improved stability and handling. The original MiTo received some negative comment from the motoring media regarding the ability of the suspension to soak up potholes and bumps and which unsettled the car's balance, ride comfort and handling. Detailed damper changes have improved this performance a great deal. The electronically controlled 'smart' variable suspension used in the Cloverleaf version again brings improvements although at a price.

Unfortunately nothing can be done regarding the MiTo's lack of rear seat head and legroom or the poor rear visibility. But it's very well equipped and you do get improved handling and fantastic performance for a 1.4-litre petrol engine. You also get great style which of itself is an important reason to buy an Alfa Romeo. — David Miles