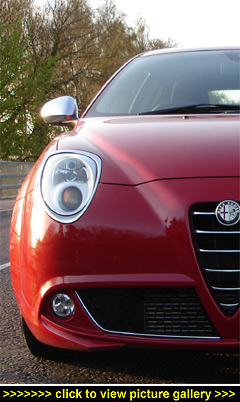 “There’s nothing new under the Sun,
or so they say. Take downsizing —
squeezing basically the same
components into a smaller body.
Not Alfa Romeo. They’ve gone right
to the heart of the matter and reduced
what’s under the bonnet while
increasing its performance. Now
that’s something new...”

COOL AND CURVY, the MiTo's exterior sparkles with tantalising hints of the gorgeous Alfa Romeo 8C Competizione supercar, most noticeably around the nose with its protruding grille and clear lens teardrop headlights. We don't really need to say any more, do we? Which in itself says a great deal about how celebrated the smart-looking MiTo has become.

Grasp the lovely chrome door handle to pull open one of the sporty three-door hatch's long doors and you'll find a cabin that majors on charm, backed up by a variety of racy trim materials assembled with visibly good fit and finish. And the result is a pronounced up-market look.

Although classed as 'compact', the MiTo manages to fit a surprising amount into its four-metre length. For a start, your rear seat passengers don't have to be best friends because, although you might not be expecting it, there's actually good shoulder, leg and foot room for those travelling in the back. As long as they're under six foot. Access to the two rear seats is easy with tilt-and-slide front seats that return faultlessly to their original positions. For those travelling in the back, the view out is fine. As, too, is the ride.

Front seats, upholstered in a smart textured cloth, are supportive. While not excessively bolstered, they seem to wrap themselves around you. Once belted-up you can savour the tactile cabin fitments, from the sensibly large, no-nonsense audio buttons to the Competizione dashboard — a curvaceous, moulded carbon-fibre-look fascia top that flows over the hooded white-on-black dials and four prominent, round air-vents like silky-satin lava and which can he specified in black, red or blue. Every time you climb aboard you'll find yourself wanting to run your fingertips over it.

The driving position is spot-on, with good visibility both to the front and side; although the low-slung seating and smaller rear side windows make the optional reversing sensors (Ł220) a sensible buy.

But it's the low-set driving position that adds considerably to the MiTo's undeniably sporty character by making the pilot feel an integral part of the machine — Iron Man but without the 'rocketeer' bit.

The MiTo's cabin really is THE place to get comfortable and relax in — made more reassuring by a five-star EuroNCAP safety rating underscored not just by passenger and front-side airbags but also by the extra airbag for the driver's knee.

Check out the boot — the tailgate opens high for unrestricted access to the 270 litres of luggage space. Flip forward the rear seat base to rest against the front seatbacks and drop down the rear seat backrest and you can transform the boot into a flat load bay. Look under the boot floor and you'll find a fifth wheel; a space saver spare, and far more useful than one of those 'tyre repair kits' that are invading boots everywhere.

Safety equipment, both passive and active, is comprehensive; starting with a built-in Fire Prevention System, Vehicle Dynamic Control (ABS + Anti-Slip Regulation + EBD + Brake Assist) with Hill Holder, driver, passenger, front-side, window and driver's knee airbags and, in case you need to use a child seat, deactivation (via the control panel menu) of the front passenger side airbag. There's also Electronic Q2 — in effect an electronic limited slip differential that improves the transfer of drive torque to the wheels and cornering behaviour.

Blue&Me should also be considered a safety feature because it enables drivers to use a mobile 'phone or listen to music from an MP3 player or USB stick without needing to take their hands off the wheel.

The MiTo's voice control system is fully integrated with keys on the steering wheel and information on the instrument panel display so your Bluetooth mobile can be left in your coat pocket whenever you're in the car, with incoming texts read out.

Connecting a digital system to the USB port on the centre tunnel lets you listen to hours of digital music in MP3, WMA and WAV format that's been recorded on mobile phones, MP3 players or USB pen drives. Naturally, there's also excellent compatibility with iPods.

All of this we've pretty much covered in previous MiTo reviews and it's the new MultiAir system that is the real headline news. In the history of the world — well, okay, motoring — engine efficiency has never been more crucial. Soon it will be illegal to leave home without it as cleaner, greener cars become not only vital but compulsory.

Technophobes can breathe a sigh of relief because the end results of the cutting-edge MultiAir technology are of far greater interest to MiTo customers than the mystifying manner of its working. Suffice to say, then, that MultiAir is engine-downsizing at its most intelligent yet. Installed in the MiTo, the 135bhp 1.4-litre MultiAir engine serves up strong low- and mid-range torque and eager top-end power combined with good economy and low emissions.

Comparing the 135bhp 1.4 MultiAir to the 120bhp 1.4 non-MultiAir engine is the best way to get some idea of just how beneficial MultiAir is — the MultiAir engine boasts CO2 reduced by over 10%; fuel consumption reduced by up to 10%; maximum power increased by 12.5%; 0-62mph acceleration reduced by 0.4 seconds; and better throttle response and less turbo lag. Now that's downsizing keen drivers can live with!

The Euro 5-ready, turbocharged 135bhp MultiAir powerplant gets the MiTo off the line to 62mph in 8.4 seconds and on to a top speed of 129mph — and all while emitting a lowly 129g/km of CO2. For a small capacity petrol engine, the 1,368cc MultiAir produces a strong fist of torque from low down in the rev-range: even the least powerful 135bhp unit punches above its weight torque-wise with 152lb ft at 1,750rpm.

Helped by Alfa's Start&Stop technology, it will return as much as 50.4mpg on the combined cycle — during our enthusiastic, week-long test drive we recorded a real-life average fuel consumption of 43.8mpg. Officially it will also do 38.2 in town and 62.8mpg on the extra-urban cycle. And even if it didn't, you'd forgive it in a flash because it's such brilliant fun to drive.

Better yet is the four-cylinder, 1.4-litre MultiAir's character: if you work it hard it still remains refined and the power is eminently usable, with eager torque always on tap.

You might suppose that a powerful small-capacity engine such as this would be highly-strung — in which case you'd suppose wrong, because not only is it happy when loping along at motorway speeds but it exhibits no signs whatsoever of being temperamental when snared in stop-start city traffic or commuter crawls.

For the record, all new MiTos now have the emission-reducing Start&Stop system. This works fluently and largely unnoticed in the background to save wear and tear on the car and driver as well as maximising fuel consumption. When the Mito's stopped and idling in neutral, it cuts the engine; when it's time to pull away and the clutch is depressed, it restarts it automatically. Linked to Start&Stop is a gear shift indicator that suggests when to change gear (up or down) in Normal and All weather DNA modes — it's subtle and you can ignore it if you prefer. And being Italian, it knows better than to distract you when you're in Dynamic mode!

Talking of Alfa's DNA, if you're fresh to the MiTo and its 'dna' then really all you need to know is that it gives the driver the option of switching between three 'handling personalities' — Dynamic, Normal and All weather — to best suit road characteristics, weather conditions or driving style. It's operated easily on the fly and at any speed by a stylishly-engineered three-way switch sited just ahead of the gear lever.

Flicking the switch instantly alters the throttle response and steering assistance. Select Normal and you get not Sex but Agility In The City!

Shift to Dynamic and you will, thanks to a quicker throttle response, sharper steering and more direct handling (with less intrusion from Alfa's version of Electronic Stability Program, the Vehicle Dynamic Control), enjoy a noticeably sportier driving experience. All weather mode 'gentles' the MiTo's responses and increases the sensitivity of the electronic driving aids; the better to tackle low-grip conditions and minimise the danger of skidding in adverse conditions. No prizes for guessing in which mode we did most of out test driving... and no apologies either!

Subtle modifications to the latest MiTo's steering, suspension and braking systems have ensured it's now even sharper to drive, with minimal bodyroll and improved stability. It's also easier to hold your line while riding out unsettling lumps and bumps. The steering is quick with crisp turn-in; corners are taken with cool assurance. Brakes — discs all round and vented at the front — are reassuringly strong.

And whether you're only going to the local supermarket or indulging yourself with an intensive driver-focussed jolly in the Scottish highlands, the MiTo is a thoroughly involving and entertaining driver's car. If longer journeys are on the agenda, the MiTo's ride comfort will make sure you reach your destination in fine fettle.

Brimming with brio, the MiTo sits comfortably at the fashionable end of the small car market. A global success story, from the moment it was launched it had a USP all of its own and now has another ace up its sleeve: MultiAir. It could be the killer app that gives the charismatic and sporty Italian the winning hand in the battle to occupy the top slot in the compact car division. — MotorBar