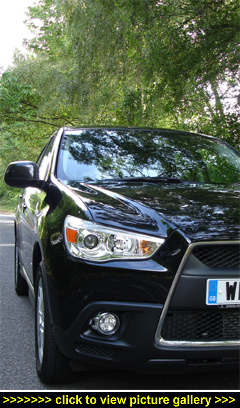 “The ASX is Mitsubishi’s player in
the expanding crossover market.
An all-new hi-tech diesel engine
ensures it’s not just one of the most
powerful but also one of the most
economical in its class with 50mpg
in real-world driving conditions...”

A SENSIBLY-SIZED FAMILY SUV, the ASX takes up a similar roadspace to conventional family hatchbacks such as the Golf and Focus. Today's crossover buyers are a rather demanding bunch — they want space, decent equipment levels, secure handling and the safety advantages of a commanding driving position; but not necessarily with consumption-hurting 4WD.

They also want something that looks fresh and exudes just a dash of self-confident swagger. Priced at a competitive Ł14,999 to Ł22,049 and with its 'jet fighter' face (courtesy of the stretched Evo-inspired grille), prominent wheelarches and squat purposeful stance, the ASX convincingly ticks all these boxes.

The spacious cabin is functional with good passenger space wherever you're sitting — the cloth-upholstered seats are comfortable and supportive, confirmed by no complaints from one of our road-testers who suffers from a bad back. The front seats also feature two-stage seat heating — especially helpful if you do have back problems. The dash is neatly styled and the driver sits high and benefits from a good range of wheel and seat (including height) adjustment. The cloth-covered centre front armrest, wide enough to be shared, slides forwards without getting in the way of the traditional handbrake. The three-spoke, leather-wrapped multi-function ('phone, ICE and cruise) wheel is nicely grippy and feels good in your hands.

An LCD screen for the on-board computer separates the two main dials — their bright white graphics are very easy to read and there are digital bar graphs for fuel and temperature. Economy-minded drivers can keep an eye on the 'ecometer' and gear shift reminder while the climate control does an excellent job of keeping them cool. Finally, underscoring the ASX's family-friendly persona, is a goodly number of storage places.

Visibility out is first class, even looking rearwards (the three rear head restraints drop down over the rear seatback when not in use) although audible rear sensors take all the guesswork out of reversing making the ASX a breeze to park! Good sized door mirrors provide reassuring three-quarter vision.

The rear seats are also comfortable, with effective lower back support and relaxing backrest angles. Rear headroom is good; and legroom is generous even for near six-footers, and made even better by the large amount of foot room. While three into two does go, two sharing the 60:40 split rear bench is best and that way rear passengers can share the fold-down rear centre armrest. A practical load-through hatch adds versatility. Large glass areas and the 'mini' third rear side panes make the comfy rear cabin a pleasant place to be.

However, if it's cargo you need to move then folding the rear seat — an easy one-movement action — creates a flat 1,193-litre load bay. Even with the seats up, there's still a very usable 442 litres.

Out of sight under the boot floor is a large, deep 30-litre secret compartment that can be lifted out to increase the boot depth by a full six inches. No spare wheel though, just one of the ubiquitous puncture repair kits.

The all-new, all-alloy 145bhp 1.8-litre turbodiesel features variable valve timing (a first for a diesel car powerplant) and endows the 1,798cc unit with the performance of a much bigger engine along with the economy and emissions of a smaller one. On the road it's got plenty of get up and go and feels as strong and willing as a petrol engine, revving cleanly as it delivers its peak torque of 221lb ft between 2-3,000rpm.

Not only that but it performs its duties quietly and sweetly, and all while returning a pretty astounding 50.1mpg — and we most certainly weren't sparing the horses. For the record, the official combined figure is 51.4mpg and going by our test results, the official extra-urban consumption of 58.9mpg should be achievable for most owners. The stop-start function can be switched off at any time but you needn't bother — it's as unobtrusive and foolproof as the keyless locking and entry.

The 1.8 turbodiesel will get the ASX from standstill to 62mph in 9.7 seconds, and on to a maximum speed of 124mph. However, the real advantage of its variable valve timing-enhanced in-gear flexibility is the way it responds to throttle inputs, accelerating without complaint from quite low revs. Even in the higher gears it remains responsive; picking up crisply in fourth for quick, safe overtaking and even in sixth on dual carriageways and motorways there's plenty in hand if you need to pull past slower traffic.

And in urban areas you aren't forced to stay in the lower gears when threading though spurt-and-brake commuter traffic. The other important benefit, of course, is that progress can be made with fewer gear changes than would be the norm in a standard turbodiesel. Not that that's a problem because the gear change action of the six-speed manual 'box is slick and precise.

Our test model was a front-driving 2WD — a four-wheel drive ASX is available for a Ł1,500 premium. The ASX utilises the same chassis as its Outlander big brother; with the same wheelbase and underpinnings.

Driving the 2WD model is refreshingly undemanding: it's fun to drive and it drives well; grip is good with minimal body roll and, while you're aware that you're riding high, the ASX is not so high that it sways in the manner of some larger 4x4s. Untroubled by torque-steer, the steering is quick and well weighted.

The ASX is well mannered and carries speed confidently through even quite sharp corners. Its default handling character is 'unruffled' — exactly what's expected of a family SUV. The suspension is fine and the ride quality well judged — bumps, potholes and broken surfaces are, for the most part, ridden over without any cabin disturbances. On motorway it's a smooth cruiser: quiet, refined, and reassuringly stable and with an unforced high-speed gait.

Stopping and slowing is also undemanding; pedal feel is good and progression fine, even when driving hard. All in all, the cabin of the ASX is a comfortable environment in which to travel. Add in its competitive price allied to a camel-like thirst and Mitsubishi's newest, very well equipped and very pleasant to drive SUV makes a very sensible and satisfying purchase. — MotorBar