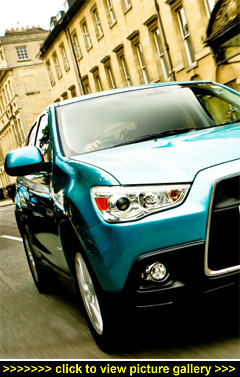 “The latest addition to Mitsubishi’s
long heritage of SUVs is the ASX,
a competitively priced, family-sized,
five-door, SUV-styled crossover...”

EVEN THOUGH ELECTRIC POWER is high on the sales agenda (with their small electric vehicle, the i-MiEV), Mitsubishi can fall back on its expertise in producing cars that the public really want. Mitsubishi now has a range of cars suitable for most proven tastes and these include SUV 4x4s in large, medium and compact sizes.

The main feature of the ASX is its diesel engine — the first variable valve diesel engine in a production vehicle. On-the-road prices are highlights as well, starting at Ł15,164 for the two-wheel drive 1.6-litre, 113bhp petrol version and ranging up to Ł22,229 for the four-wheel drive 1.8-litre diesel 145bhp version. Most people will opt for a mid-range 1.8-litre diesel with two-wheel drive in level 3 specification weighing in at an attractive Ł18,729.

The petrol engine is available with two-wheel drive only with specification levels 2, 3 and 4. The diesel models have 3 and 4 grade trim with 2WD and 4WD versions. All models have a fuel saving Auto Stop & Go system as standard, a five-speed manual gearbox for the petrol engine and a six-speeder for the new diesel engine. A three-year service plan costs an additional Ł445 which is more than for Mitsubishi's larger Outlander and Shogun 4x4 models.

The ASX takes its name from 'Active Sports X-over' and it uses Mitsubishi's new world C-segment platform that is shared with their Lancer Saloon and Hatchback range. Indeed, the ASX looks very much like a taller and more muscular version of the stylish Lancer five-door Hatchback. As such it is Mitsubishi's answer to the market-leading crossover, the Nissan Qashqai, and the strong-selling Peugeot 3008 which is my particular favourite.

There are a now quite a number of these SUV-styled, family-sized models to choose from — the most recent being the Kia Sportage, Hyundai iX35 and the MINI Countryman. The Nissan Juke, a sporty looking compact SUV, will soon join the ever growing crossover sector.

Smart to look at, well equipped and the right size for family crossover use, on the face of it the ASX doesn't set any new standards in its sector but it is very attractively priced. However, its star feature is the world's first diesel engine with variable valve timing.

The all-new, four-cylinder 1.8-litre turbodiesel unit applies modern direct injection petrol engine technology to a diesel engine. This world first for a diesel engine uses variable valve timing applied to the inlet valve train to deliver a number of advantages, most notably responsive driveability due to its free-revving nature.

Just like a petrol engine in fact; good performance with 145bhp and 221lb ft of torque from 2,000rpm and good fuel economy of 51.4mpg for the Combined Cycle with relatively low CO2 emissions of 145g/km for the best-selling two-wheel drive versions and 49.6mpg and 150g/km for the all-wheel drive models.

Top speed for the diesel two-wheel drive version is 124mph with a 0-62mph time of an impressive 9.7 seconds (123mph and 10 seconds for the all-wheel drive models).

Combined with variable geometry turbocharging the 1.8-litre turbodiesel is particularly notable for its low compression ratio of 14.9:1 — the lowest of any current passenger diesel car engine on the market. This low ratio was one of the main design objectives in order to achieve refinement, low emissions, long lasting reliability, smooth running and enjoyable driving performance.

The new variable valve timing function controls the closing timing of the inlet valves for an improved effective compression ratio. Reducing the 'lift' of the inlet valves creates a stronger swirl of fuel/air mixture for maximum power and lower emissions. Multi-stage fuel injection (the variable number of injections per piston cycle), provides the correct amount of fuel/air mixture at all times depending on what load the engine is being put under. All clever stuff, and a very logical move by Mitsubishi who also developed the world's first direct injection petrol engines known as GDI.

For the record, the new 1.6-litre petrol engine, which will appeal to some customers because of its lower purchase price, is a 16-valve DOHC unit with variable valve timing and is based on the 1.5-litre engine fitted to Colt Hatchbacks. Power output is 113bhp, torque 114lb ft, top speed 113mph, 0-62mph 11.4 seconds and 47.1mpg with CO2 emissions of just 138g/km.

Thanks to the comprehensive safety specification which includes up to seven airbags, the ASX has a Euro NCAP 5-star rating. And pedestrians are considered as well, with the use of plastic front wings, a double-bulge cushioning bonnet and energy-absorbing front bumper.

The engine and pricing are most definitely the stars of the ASX show. My test model, the ASX 3 1.8 two-wheel drive costs Ł18,549 but the on-the-road costs push this up to Ł18,729 — still really good value. With just 145g/km of CO2 emission road tax is Ł125 a year and for company car drivers the Benefit-in-Kind tax is 21%. Officially this model will return 51.4mpg in the Combined Cycle but my car did better, returning 52.2mpg for day-to-day driving during the week-long test.

Fuel- and CO2-efficient this new technology 145bhp diesel engine might be, but not at the expense of performance. The first thing I noticed was how free revving and eager it was, not the usual lazy long stroke diesel feel. It is ultra responsive and, boosted by a turbocharger, power streams in very readily from 2,000rpm upwards giving it a very good zero to 62mph acceleration time of 9.7 seconds and an impressive 124mph top speed. This diesel unit feels as responsive as the latest direct injection turbocharged petrol engine but with more torque at 221lb ft.

The engine can be a bit noisy at low speeds but that disappears on open roads. The Auto Stop-Go system worked happily enough and seems to complement this excellent new engine well. The six-speed gearbox has well spaced ratios and is very slick and positive to use.

The ride is on the firm side but it is not uncomfortable. Road control is good and cornering grip predictable. This was the two-wheel drive model so I look forward to seeing how this unit performs with the electronic all-wheel drive system. Certainly the official figures for performance, fuel consumption and CO2 emissions show very little difference between two- and four-wheel drive models but these 4x4 versions cost Ł1,500 more than the 2WD models.

All positive stuff but not totally perfect in the area of the interior. Yes this ASX is well equipped and really good value for money. It is roomy for passengers both front and rear and offers good rear headroom. The load area is not as long as the Qashqai or Peugeot 3008 but the quoted load capacity figures are strangely better at 442 litres with the rear seats in place and 1,193-litres with the seats folded.

But it is the visual quality of the interior that disappoints. It looks very drab and feels cheap although the quality seems durable. It does not come close to the sumptuous interior of the Peugeot 3008 which is a real shame because in most other respects, certainly for price and the excellent new engine, the Mitsubishi ASX diesel crossover is a winner. — David Miles