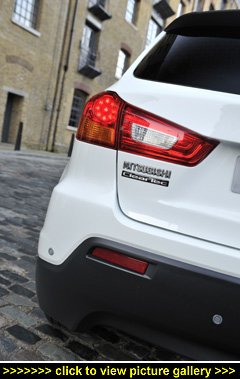 THE ASX IS A LIGHTWEIGHT, mid-sized crossover available in either two- or four-wheel drive. Crossovers are hugely popular, with more and more motorists coming to appreciate their SUV looks, 2/4WD options, versatile seating/load carrying versatility, car-like driving and comfort characteristics and the fact that they're more affordable to buy and run than full-blown 4x4s and SUVs.

The ASX range offers four trim levels: 2, 3, 4 and a new Black model. Engines can be 1.6-litre petrol (five-speed manual with 2WD) or 1.8-litre DI-D diesel with a six-speed manual and two- or four-wheel drive. Unfortunately there's no auto option for either engine.

And the ASX comes in colours other than black: you can have blue, white, silver, grey, or red. Externally the ASX Black sports a chunky yet dynamic appearance courtesy of a satin black styling kit comprising of striking black 17-inch alloys, roof, spoiler, mirrors, grille and fog lamp bezels.

The cabin gains special edition black leather with carbon-fibre inserts. Other items carried over from the ASX 4 trim include a Kenwood SatNav, reversing camera, iPod connection, power windows and mirrors, and AirCon.

The ASX also incorporates Mitsubishi's RISE safety technology (this dissipates the energy from an impact away from the passenger compartment) as well as ABS, Active Stability Control, Traction Control, Electronic Brake Distribution, Brake Assist and an Emergency Stop Signal System along with seven airbags. For the record, the ASX also comes with a five-star EuroNCAP safety rating.

Remarkably, my week-long test drive resulted in an overall average fuel consumption of 58.9mpg! In fact, on one journey (a long A-road with a 50mph speed limit) the figure was even higher — 62.4mpg. Also, the low-ish tailpipe emissions mean an affordable Ł130 a year road tax and 22% company car tax.

Later this year (in the first quarter of 2012) a revised and even more fuel-frugal version of this 1.8-litre engine will be introduced. Its CO2 emissions will also be lower and while it will produce the same amount of torque, it will be on tap lower down — from 1,750rpm instead of 2,000rpm.

Surprisingly, the power output has been significantly reduced — to 114bhp — and that in turn brings down the top speed by 7mph to 117mph and adds half a second to the 0-62mph time.

However, the official combined cycle fuel consumption figure goes up — to 54.3mpg. More good news is that the reduced CO2 emissions (136g/km) incur lower road tax — down to Ł115 a year. BIK company car tax is 20%.

What these figures show is that there's an interesting choice to be made between 2011 and 2012 model year engines: the petrol is a tad slower performance-wise but cheaper to buy by a hefty Ł2,240. Its official fuel economy is not very much worse than that of the diesel; and neither is there much difference in road tax charges although the company car tax is lower. The petrol unit needs servicing every 12,500 miles; the diesel every 9,000 miles.

For the present, high mileage drivers, and those who prefer the torquey and responsive characteristics of a modern turbodiesel, will choose Mitsubishi's 2011 model year 1.8-litre with its variable valve timing. It is a bit noisy under acceleration, and sounds a bit harsh at tick-over, but the real-life fuel economy is brilliant.

You don't have to try with this unit — averaging close to 60mpg with this engine most of the time was effortless. And the 124mph top speed and 9.7 zero to 62mph acceleration was impressive. Because the high final drive ratio used to minimise overall CO2 emissions makes it feel less responsive than the figures suggest it should be, I'd prefer the 221lb ft of torque to be available below the current 2,000rpm. Under 1,750rpm the response was flat and not like one expects from a modern diesel engine. That noted, once you get into the powerband with the turbo blowing, the response is first class.

Driving at lower speeds requires driving in a lower gear than normal for a modern diesel. However, the driver just needs to keep the revs up, and in many ways it is like driving a petrol-powered SUV — more revs equals more torque and better response.

Mechanicals aside, the ASX crossover is a roomy five-seater with decent load space: 442 to 1,193 litres of it. The cabin looks a little dated compared to the latest standards in controls, switches and layout offered by the likes of Ford and Vauxhall but the ride is comfortable and the handling sure-footed. At times, poor road surfaces can unsettle the ride and noise intrusion from the tyres into the car is quite high.

To look at, the new Black specification is a touch blinged-up and will no doubt appeal to young business users for whom glitzy wheels, body styling and paintwork tweaks have a strong appeal when it comes to 'street cred'. Fine if you like a dash of brash, but for some customers the standard ASX 4 donor level trim will be as equally desirable.

Against? No automatic option, diesel models need servicing every 9,000 miles, reduced bhp for 2012 model year diesels, Ł2,240 price premium for the diesel over the petrol models.

On the plus side you do get a solid, well made vehicle with a lively engine and a braked towing ability of 1,400kg along with a roomy, comfortable and highly specced cabin. You also get brilliant fuel economy. — David Miles