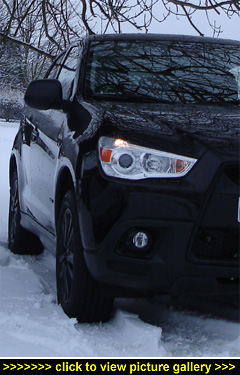 “If they remade the Bruce Willis
sci-fi movie The Fifth Element today,
all the cars would have to be
crossovers. They’re everywhere
— and one day soon we’ll all be
driving them...”

WHY? Well, because as a family car (and according to today's headlines, marriage and families are back in fashion) crossovers tick all the right boxes, plus they also reward their owners by being great to drive.

In the case of the Mitsubishi ASX (ASX is automotive shorthand for Active Sports X-over), that means smart 4x4 looks wrapped around a family-friendly cabin that's in touch with its feminine side. Add in the choice of two- or all-wheel drive and the respected Mitsubishi name and there you have it: the five elements of a new 'people's car'.

The ASX Black is a special edition top-spec model and you can have it with two-wheel drive (to the front wheels) or with all-wheel drive: 2WD costs Ł23,745; 4WD Ł25,895. Tested here, because the 2WD will account for the bulk of ASX sales, is the ASX 4 Black 2WD with the 1.8 diesel. Should your refuelling tastes run to unleaded there's a 1.6 petrol, but the turbodiesel is such a peppy performer that you'd be forgiven for choosing the oil-burner.

Now we've mentioned the engine, we'll start with that. And it's a good place to begin. The 147bhp 1.8-litre DI-D turbodiesel comes married to a six-speed manual transmission.

Featuring Mitsubishi's MIVEC variable valve timing technology, this all-aluminium diesel is notable for being a passenger car 'world first'. Backing up the bhp is a hefty 221lb ft of torque from 2,000-3,000rpm, sufficient for 0-62mph time in 9.7 seconds and a top speed of 124mph.

Black by name it might be, but under the skin it's more green by nature. Pro-economy features include advanced alternator control (increases battery charging when braking and reduces it during idling, accelerating or cruising, thereby easing the load on the engine for improved fuel consumption); low rolling resistance tyres to reduce drag; electric, rather than hydraulic power steering; and Auto Stop & Go (shuts down the engine when at a standstill and instantly restarts it when you depress the clutch pedal).

Thanks to its variable-lift valves the 1.8 feels more like a 2.0-litre and the 221lb ft of 'grunt' ensures it pulls strongly from low down and through the important midrange and doesn't run out of puff at higher revs. It's quick to zip along and there's good pick-up in the higher gears. But can you hear it's a diesel? Actually, does it really matter? In case you think it does, then the answer to that first question is Yes, but only just. In other words, it really doesn't matter.

What does matter is that this new engine can, officially, return 51.4mpg on the combined cycle (42.2 urban and 58.9mpg touring). Our test average worked out at an impressive 50.3mpg. And that was in snow and icy conditions that drag down economy. Driven by a different MotorBar road-tester just a few weeks earlier, its real-world average was 58.9mpg with a best of 62.4mpg! Good news for owners; bad news for the Government's coffers.

With so many crossovers hitting the roads, it's nice to have one that stands out from the herd. Along with Mitsubishi's 'family' grille on its thrusting nose and a hint of Evo X menace, the ASX Black boasts enhanced exterior styling with a satin black styling kit that includes striking black 17-inch alloy wheels, roof, spoiler, mirrors, grille and fog lamp bezels.

Earlier we mentioned the F-word (family!). Based on the same platform as the Outlander, Lancer and Lancer Evolution X, the ASX also has the same wheelbase as the bigger Outlander which explains the generous interior space. Headroom is good too, and even lanky passengers can be carried without complaint. In fact, the ASX cabin makes a normal hatchback seem positively dungeon-like.

A nice (and appreciated) touch is the wiper action: a single wash-wipe pull gets five spaced squirt-and-wipes for a truly clean screen with a follow-up wipe five seconds later to get rid of any last drops. Importantly, it ensures you get the best visibility during washing and wiping — a lot of cars tend to flood the glass all at once which reduces forward visibility for precious seconds. Good one, Mitsubishi.

Should a collision be unavoidable, then you'll be in a safe place — the ASX's occupant protection is endorsed by a five-star Euro NCAP safety rating.

Along with the original cocaine and kola nut recipe CoCa-Cola, bull-bars on 4x4s and SUVs are also long gone but it's still nice to know that the ASX's pedestrian impact protection is also excellent. [Coca-Cola's original key ingredients were cocaine and caffeine: the cocaine was derived from the coca leaf, the caffeine from kola nut, which coined the name Coca-Cola. For marketing purposes the 'K' in kola was replaced with a 'C' — Ed].

The interior is also well designed: it's simple, clutter-free and easy to navigate. There's an easy on/off for the stop-start on the fascia, clear 3D SatNav mapping, high-clarity white-on-black dials either side of the driver's information display (outside temperature, average mpg, range, etc) plus there's plenty of hot air available — and very welcome it was during our snow-rich test week.

The driver enjoys a command driving position with a clear view of the road ahead over the sloping bonnet. The steering wheel adjusts generously for reach as well as rake and height-adjustable front seatbelts keep drivers of all sizes happy. There's also plenty of space around the pedals so it's easy to drive in outdoor boots — fine for those family picnics or active lifestyle weekends. Adding to the driving pleasure is a precise and easy gearchange action.

The front seats in Black versions are supportive and well-padded with carbon-fibre inserts and embroidered 'ASX Black' logos. The seats are set high off the floor, so your lower legs are at a better angle which makes for better long-distance comfort. There's also plenty of personal space in all directions and the cabin is quiet and refined at speed.

Rearward visibility through the back screen is okay but the rear camera view displayed on the SatNav screen is well worth having. And there's ample cupholders, pockets and cubbies, including a decent-sized glovebox and deep two-tier central storage box (with 12v power, USB and Aux sockets) topped by a central front armrest.

Climb in the back and all's well there too. For a start there's more than enough leg room, made better by plenty of room for your feet under the front seats. The backrest angle is adjustable and adults can really stretch out. A well-padded central rear armrest adds to the ease.

Three adults is fine; but two can definitely lounge. A good-sized load-through 'ski-hatch' enhances versatility and the 60:40 split-fold rear seats fold with their headrests in place.

Stuffing the 442-litre boot is also hassle-free, thanks to a wide-opening tailgate and mid-thigh-height loading sill. Beneath the lift-up boot floor is a very large underfloor tray for 'secret' stuff. For cargo duty, the rear seatbacks fold down onto the rear seat base to provide a flat loadbay of 1,193 litres. And should you need a deeper boot, the false floor lifts out and folds in two for easy storage.

Courtesy of its compact footprint and well-weighted steering, the ASX feels nimble on the move; it's reassuringly well-sorted and handles predictably. But most of all it's enjoyable to drive and comfortable — most road imperfections are absorbed without waking the passengers. And given that the only jungle it's likely to see is an urban one, the 2WD version is all the better for that.

We spent much of our week's test driving in snow and over icy roads and the two-wheel drive coped admirably. More good news is that, as satisfying to own as the range-topping Black versions are, you can put an ASX on your drive from as little as Ł16,499 (1.6 petrol) or Ł20,599 (1.8 diesel).

The ASX comes with three years' unlimited mileage warranty, 12-year anti-corrosion perforation warranty, 3-year pan-European roadside, and home and accident assistance. For further peace of mind owners can purchase the Mitsubishi Service Plan (Ł650) which covers the first three scheduled services. This can also be transferred to a new owner when you sell.

The diesel Black is economical to run — as important to many as the fact that it's good to drive. Families will like its spaciousness and versatile nature. It's also stylish without being precious and it's also planet-friendly. A compact crossover with a conscience! — MotorBar