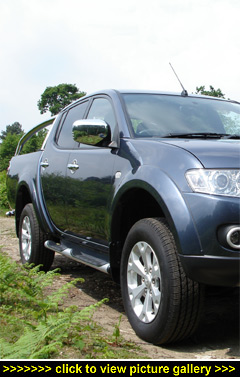 “With a name like ‘Barbarian’
you could be forgiven for thinking
that Mitsubishi’s range-topping
L200 pick-up is the automotive
equivalent of Genghis Khan. Sure,
the Barbarian is tough but, like
the Mongol Emperor, there’s more
to it than meets the eye...”

FOR THOSE NOT ALREADY CLOSELY ACQUAINTED with pick-ups, the L200 range is the best-selling pick-up in the UK. A rugged workhorse at heart it may be but in range-topping double cab Barbarian spec as tested here there's another, more civilised, side to its dual-mode character. That of alternative lifestyle transport.

Take a look at the picture gallery and you'll see that when it comes to looks the Barbarian is no Shrek. In five-seater double cab guise it has shameless in-your-face styling. Finished in metallic black (what else?), with extra chrome features, defining alloy side steps and riding on chunky alloy wheels, it really is handsome in an appealingly rugged way and attracts many admiring glances.

Let your gaze travel further back, past the 'pod'-like cab, and you'll see why the Barbarian makes such a great workhorse — despite giving up some length to the five-seater cab section, the 1,505mm long by 1,470mm wide pickup bed is still big enough for serious hauling. And at 5,185mm from nose to tail, the Barbie's triple-grille front-end will, however far you reverse, still jut out when you park at your local supermarket.

A neat, lockable and sturdy roller-blind-style 'lid' keeps the load bed secure and sealed against the weather. And, opened or closed, you can carry a tonne of cargo — anything from a pallet and heavy duty DIY equipment to a quad bike.

Access is easy thanks to wide opening doors and the practical full-length, non-slip side-steps. When the doors open, the kick plates glow a vivid blue to make night-time access that much safer. Climb aboard — and you do climb easily up into the cab, where you'll find a warm welcome awaits you.

With four doors and seating, belts and headrests for five it's clearly able to fulfil family obligations. With two near-six footers in the front there's room enough for two more behind on the shapely rear bench, itself several inches higher than the front seats. Generous glazing lets in lots of light while providing good views out. A well-padded central armrest with built-in cupholders large enough to take cans or bottles will also be appreciated by back seat passengers.

In top-trim Barbarian guise there's an impressive amount of quality kit fitted as standard, including a Kenwood SatNav / infotainment centre, reversing camera with on-screen display, leather upholstery, climate control AirCon, cruise control, Bluetooth, iPod connector (in the large, lockable glovebox), 17-inch alloy wheels and four power windows (all one-shot auto up/down) with electrically-adjustable heated and on-demand power-foldable door mirrors — the centre section of the rear screen is also power operated and can be dropped fully down for access to the load bay behind or simply for airing the cabin. Privacy glass is also standard on the rear windows and back screen.

The driving position is good and even though there's only tilt/height adjustment of the leather-wrapped wheel, most drivers will easily find the 'right' position. The driver's seat is also height adjustable, as too are the front seatbelts. The seats, upholstered in black leather — the front pair sport embroidered 'Barbarian' motifs on their upper backrests — have perforated centre panels and are supportive and easy to relax in.

The dash is easy on the eye and the instrument cluster, made up of three overlapping dials, is easy to read. The handbrake is a conventional item and doesn't get in the way of the centre armrest, beneath which you'll find a fair size storage box. Also handy, a 'secret' drawer is fitted beneath the front passenger seat. And you can store your shades in the drop down holder in the roof.

Powering the Barbarian is a 172bhp 2.5-litre four-cylinder diesel unit mated to a five-speed automatic tiptronic gearbox and while it offers the option of manually overridden shifts, it's fine just left to get on with it. For the record, the Barbarian's top speed is 109mph, with 0-62mph coming up in 13 seconds.

Yes, it's a tad diesel-ish on start-up and occasionally rattles pulling away but it lopes along motorways and cruises quietly enough at the legal limit — 70mph at 2,200rpm in 5th.

And when you want some 'grunt' it's always there for you. What mechanical noise is there is not intrusive at all. With 258lb ft of torque on tap, the Barbarian is well endowed in the pulling department and consequently an easy machine to tow with.

And despite the auto 'box, it's not the hard drinker you'd expect: officially it returns 25, 30.1 and 34mpg respectively for the urban, combined and extra-urban cycles. In real-life we averaged a consistent 29.5mpg.

On the move the Barbarian drives like a car and in spite of robust 'work' underpinnings such as tough leaf-springs (the better to cope with its one-tonne payload) and a separate box-section ladder chassis, it serves up a surprisingly comfortable ride that makes easy work of long motorway journeys.

While not as supple a set-up as on a regular car, the rear leaf-spring suspension makes for a stiff rear-end when unladen but that doesn't stop the Barbarian zipping over speed humps without any real crashing or jarring. When it comes to braking it's just a matter of pushing on the progressive middle pedal and stopping. No drama. No issues with the steering either — you point; the Barbarian goes.

There's quite a lot to like about the Barbarian. For a start you can drive with the windows open (at least until the EEC Health & Safety commissars ban it!) without any buffeting or wind noise. And the powered drop-down rear screen (just press the switch at the base of the centre stack) is also great for letting in some air. Sure the AirCon will do seriously cold but there are times when real fresh air wafting through the cab is a pleasure.

The touchscreen operated SatNav is really brilliant — foolproof, clear and with 3D mapping. You can also have fun choosing your custom vehicle icon (see SatNav screen shot in image gallery) as well as selecting between the four guidance 'voices' on offer: two Brits (Emily and Daniel) and two Yanks of the "y'all" type (Jack and Jill). Tip: unless you're a good ole country boy, Emily speaks the Queen's English and is the one to listen to.

Also integrated into the Kenwood SatNav is ecoRoute, a feature that not only records your mpg but also allows you to calculate the fuel consumption, the carbon footprint and fuel price to a destination, display mileage reports for every route you drive and even calculate routes that use less fuel. It's actually a very useful piece of kit. On top of that, it's also an all-singing, all-dancing music centre. And, if the worst comes to the worst, there's a 'Where Am I?' feature that displays your exact latitude and longitude.

With a width of just 1,815mm (not counting the mirrors that, helpfully, power fold on demand), the Barbarian can be threaded through traffic and tight spaces with ease. And thanks to the first-rate see-all-corners visibility, a good turning circle and the reversing camera, it's no hassle to park.

If you enjoy an active or outdoors lifestyle and need to haul or tow your 'accessories' at the weekend, then a Barbarian should definitely be on your list. And if, when the year 2012 comes round, it turns out to be less like the movie and more Mad Max Beyond Thunderdome, then this Barbie will come into its own in a very big way. — MotorBar