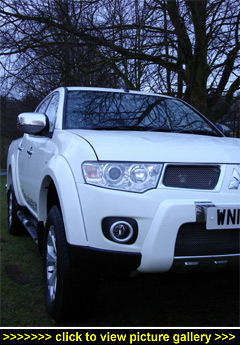 “Mitsubishi’s L200 Barbarian likes
a bit of the rough… and once you’ve
driven one, so will you! In essence
a semi-luxury SUV, Mitsu’s Double
Cab pick-up adds a whole new
meaning to ‘throw something on
the Barbie, mate’...”

THE MITSUBISHI L200 IS THE BEST-SELLING PICK-UP in the UK, although for non-trade private owners the most comfortable versions — the double cab models — make the most sensible purchase. Don't imagine for a minute that this is the token truck you buy to complement the big Merc saloon and town-sized Audi already living in your triple garage. Believe me, there's nothing 'token' about a Barbarian.

It may look like a truck — and a pretty slick one at that — but what you see is what you get: it's a will-do, no fear, go-anywhere kind of vehicle. If Bruce Willis was a pick-up, he'd be a Barbarian.

Where to begin? The price is always a good place. You can pick up a Mitsubishi L200 double cab from as little as Ł15,249 (+VAT) or as much as Ł26,789 (+VAT). The Barbarian with automatic transmission as tested here costs Ł22,924 (+Ł4,585 VAT). A nice little payback is that because it's classified as a commercial vehicle, the VAT is reclaimable. So, if you're VAT-registered you could be paying a very reasonable Ł23K for your Double Cab Barbarian.

The real bonus is that ahead of the rear load bed is a four door, five-seater family car-sized cabin. If you're thinking 'commercial' interior, think again. Climbing aboard is easy and most adults won't need the sturdy non-slip side-steps.

Although it rides high, it's an easy move to park yourself in one of the comfy leather-covered seats. Other thoughtful details: the chromed door handles are big with a foolproof pull action, so opening them with gloves on is easy; and the pale blue illuminated kick plates for night-time exit and entry.

If you took the driver's seat you'll immediately feel at ease thanks to the excellent visibility — front, side and even to the rear. The rear screen is a full-width item with the added bonus of a centre section that, just like the other four windows, features auto, one-shot up/down operation.

Through it, both rear corners of the load-deck can clearly be seen. If that's not enough, there's a handy rear-view camera that displays a crystal clear, non-distorted image of what's going on behind you on the touch-screen that also serves the SatNav when you're driving forwards.

The commanding driving position is enhanced by seat height adjustment and a three-spoke leather-wrapped steering wheel (with audio and cruise control buttons) that adjusts for tilt/height. Height-adjustable front belts are also welcome, as too are the large door mirrors — electrically-operated with on-demand power-fold. Two stand-out features of the SatNav are the large on-screen '+' and '—' icons for instant zooming in and out, and the easy-to-read strip along the top of the screen displaying the name of the road you're driving on.

Thanks to its dual-purpose character you can drive with your boots on — wide footwells guarantee that; the left-foot-rest on our automatic version was set at a restful angle and not too wide, so whatever your shoe size your left foot is safely away from the brake pedal.

The fascia is refreshingly uncluttered with the colour touch-screen display set dead centre at the topmost point. Three overlapping black-faced dials — rev-counter, larger speedometer and a third for fuel and temperature — ahead of the driver feature clear white graphics and amber illumination. Fit and finish is good, with plastics that look tough enough to survive both family and workhorse duties. The black leather upholstery is pleasant to sit on; the seat beneath the soft hide is supportive and cushions you well enough, and the minimal side bolstering keeps you in place without being pushy.

Interior storage space includes a fair-sized glovebox (you'll find an iPod/MP3 lead inside and the key-turn switch for deactivating the front passenger airbag), a centre console bin with a 12v-socket topped by a padded armrest, twin Siamesed cupholders and a couple of smaller cubbies ahead of the chunky selector lever and below the three rotary controls for the climate control. There's also a sunglasses holder in the front overhead light cluster — and a slim sliding drawer beneath the front passenger seat.

Few owners will bother lifting the bonnet to show off the engine to their chums. No need — you don't have to see it to appreciate it. With 175bhp and 258lb ft of torque on tap from 1,800rpm, the turbodiesel is as gutsy as the Barbie's don't-mess-with-me body styling. Top speed is 109mph and 0-62mph takes 13 seconds.

The Barbie is too self-confident to have any hang-ups about letting you know it's a diesel. Personally, I don't like to hear 'nothing but the ticking of the clock' and found the 2.0-litre's gruff engine note reassuring. Yes, you know when the motor's working hard but for everyday driving, and with the selector left in D, there's no call to press hard on the loud pedal and relaxed progress comes easily.

A major improvement is the replacement of the previous four-speed auto with an electronically-controlled five-speed automatic with a sequential Sport mode similar to that fitted in the Shogun.

Shifts go unnoticed and if you need to take charge then you can always snick the selector half an inch to the left and make manual changes yourself. The five-speed auto will, incidentally, let you select second to pull away on slippery surfaces.

Bowling along the motorway, the engine settles to a pleasant background hum and with no real noise from the big Michelin Cross Terrain 245/65 tyres or the wind, refinement is unexpectedly good — good enough to make the miles roll by almost unnoticed, particularly if you've engaged cruise control. The Barbarian's cruising consumption is, officially, 34mpg, with the urban and combined cycle figures respectively 25 and 30.1mpg. Our test week's average came in at 25.1mpg.

The back seat is a bench but made better by an angled rear seatback. The outer two spots are shaped to match the front seats and proved to be comfortable; even the middle position was acceptable for an adult. A large centre rear armrest with built-in cupholders ups the comfort for one or two adults. The large glass areas combined with the full-width rear screen keep it light and airy and, as mentioned, the rear screen's centre section can be powered down for some real fresh air without buffeting. Foot room under the front seats is adequate and a pair of near six-footers can travel without complaint behind two more sitting up front.

The flat load bed measures 1,505 x 1,470mm and, basically, if you can load it, the Barbarian will cart it for you. You can also tow 2,700kg braked which explains the appeal to private buyers with an active lifestyle.

A truck, sure, but it's a pretty comfortable one at that — not a single grumble from any of MotorBar's test drivers during a week's hard driving. Even Maggie, who suffers from a bad back, found it an easy-to-drive and likeable mode of transport. In fact, she wanted to keep it!

While the suspension set-up is definitely 'heavy-duty' (double wishbone and coil spring arrangement at the front; leaf springs located above the rear axle at the rear, which aids ground clearance for rough terrain work and makes for better vehicle stability due to greater roll resistance), the Barbie rides far better than you might expect — potholes and speed humps are noticed but you're never jarred. And even unladen it never really feels 'bouncy' so long as you drive sensibly. Do so and the Barbie will treat you right.

Warrior versions of the L200 have Super Select 4WD. This allows shifting-on-the fly at up to 62mph with the added benefit of a 4H mode (full-time 4WD with a high gear ratio). In normal driving conditions, torque is distributed 50:50 front-to-rear but if a loss of traction is detected, more torque is sent to the axle with the most traction.

The 4H mode can be used at any speed and for any road conditions and provides traction and safety, particularly when towing or driving in difficult weather conditions. Alternatively, for road use, you can save a drop of fuel by leaving it in 2H rear-wheel drive. There's a low ratio settings for off-road work and the driver can also call on a differential lock to stay out — or failing that, get out — of trouble.

Good to know, too, that in addition to the Super Select 4WD, Mitsubishi's Active Stability and Traction Control system is also standard. This enhances traction and stability both on- and off-road and Mitsubishi is the first manufacturer to fit a stability control system as standard to a pick-up.

On first acquaintance the Barbarian looks imposing. And at 5.1 metres in length, it's no shrimp. So you'll be glad of the on-board reversing camera when parking. Looking over your shoulder, the top rear corners of the load bed are clearly visible but the real-world view on the touchscreen of what's behind takes all the worry out of manoeuvring backwards.

Width-wise, the Barbie's 1.8m girth is on par with the average car. Helped by its rugged appearance, it's easy to thread through gaps in the traffic. The rack-and-pinion steering is fine, and while the turning circle is a class-leading 5.9m there's one extra twirl lock-to-lock than on the average car but you adapt without really noticing it.

Undeniably fit for purpose whether you want a tough workhorse or a family-focused leisure vehicle, the Barbie Double Cab will be whatever you want it to be. — MotorBar