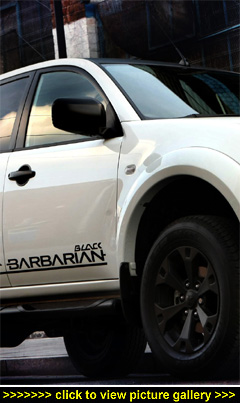 “Mitsubishi’s L200 pick-up has been
picking up Pick-Up Of The Year
awards for twenty years. Today a
large proportion of pick-ups are
bought for recreational use — and
for lifestyle users the pick of the
latest generation L200 range has
to be the Barbarian Black...”

THE UK'S BEST-SELLING PICK-UP, Mitsu's L200 is also one of the longest-serving on the market, its success rooted in a well-earned reputation as a tough and reliable workhorse (now covered by a class-leading five years/125,000 miles warranty). But in its range-topping Barbarian lifestyle guise it's as much about comfort and luxury as it is about the rugged outdoorsy life.

As you might guess from the name, Black is the theme: roof, sports grille, front resin guard, door mirrors, door and tailgate handles, fuel filler cap, fog lamp bezels, rear bar, tubular side steps, and side decals are all finished in satin black. Combined with glossy black paintwork, tinted glass and 17-inch black alloys, it makes for a decidedly menacing road presence. Tailgaters avoid it like dogs avoid a grizzly.

Under the power-bulged bonnet you'll find a rugged black-oil-burning 2.5-litre turbodiesel that spits out 175bhp and generates 258lb ft of torque for flexible pulling power. Road performance — 13 seconds to 62mph from standstill — will see you keeping up with traffic. If there's a tail-end Charlie, it won't be you.

With the selector left in Drive, relaxed motoring comes easily although full-bore acceleration is accompanied by a diesel soundtrack. On motorways with cruise control keeping you legal, the miles pass by unnoticed. At these sustained extra-urban speeds the Barbarian can, officially, return 34mpg. A week of mixed driving over assorted roads saw our average consumption exceed the official combined 26 with 26.7mpg.

Equally as important as the miles-per-gallon, that 258lb ft of torque combined with its 2,700kg braked towing ability makes the Barbarian a tow-car supremo. And for many, that's its heartland USP.

Inside the 5.2-metre, four-door, five-seater double cab Black behemoth there's more black, although this time it's softer — the leather for the upholstery. Look around and while there are some hit-tech items such as a touchscreen SatNav, reverse camera, and Bluetooth, the underlying toughness is there in the trim that looks set to outlast the years and any (and all) abuse you feel like dishing out.

That said, 'workmanlike' doesn't do justice to the cabin ambience because this Barbarian is no 'truck'. Seating allows five to travel in the Black double cab; and they won't want for much. Starting with the illuminated kick plates and door puddle lights that make it even easier climbing up into the cab using the well-located flat-topped tubular side steps once the sun's gone down.

After that it just gets better: climate controlled air conditioning that pushes out all the hot or cold you dial up, a Kenwood infotainment system with touchscreen operation that pushes out all the sounds you want, five power windows (all auto one-shot up/down, including the rear screen's heated centre section), iPod connectivity, Bluetooth hands-free, etc.

This Barbarian is one Big Boy, and needs all its space. Without the optional load-bed hardtop rear visibility is fine, with both top rear corners of the rear deck easily seen; but with it fitted, things become rather tricky reversing-wise and the rear-facing camera, slaved to the sharp-focus SatNav screen, becomes invaluable and keeps you from harpooning the car behind with the Barbarian's own weapon of mass destruction — its tow bar.

Back to the driving seat: plenty of headroom, seat height adjustment and a three-spoke leather-wrapped multifunction wheel (audio and cruise control) that's tilt adjustable make the best of the lofty driving position. Height-adjustable front belts are unexpected but definitely welcome, as too are the large power-operated (with on-demand powerfold) door mirrors.

Given its 'backwoods' capability, it's likely that many Barbarian drivers will be wearing boots (hiking, steel-capped or just plain double-digit sized), so the wide and roomy footwell with its big left-foot-rest set at a restful angle is another much-appreciated feature.

The dash is shapely but refreshingly 'clean' of clutter and the ergonomics fine: the colour touchscreen SatNav display is set at the topmost point of the fascia and is perfectly visible from the driver's seat. Three overlapping black-faced dials ahead of the driver — rev-counter, speedo, and combined fuel/coolant temperature — use sharp white markings on black for easy visibility.

You'll find the lead for your iPod and the deactivating switch for the front passenger airbag inside the lockable glovebox, while between the front seats a padded armrest caps another large storage bin. Plus there's a good-size lidded tray ahead of the very manly selector lever. The sliding drawer under the front passenger seat also comes in very handy, as too does the overhead sunglasses holder. In other words, there's plenty of room for odds and sods.

The rear bench benefits from a well-canted seatback, and with the outer two seats shaped to match the fronts travelling in the spacious rear cab is comfortable; and interesting because you sit higher. In fact, even the 'piggy in the middle' spot was okay for a grown-up.

Drop down the large, well-padded centre armrest (cupholders built-in) and two adults really can relax as they watch the world sliding by through the large glass areas. As already mentioned, the rear screen's centre section can be powered down to let in lots of fresh air without any buffeting or draughts.

Luggage space is not an issue: there's enough room in the hardtop-covered rear deck to help solve the UK's housing crisis. Okay, not literally — but it's undeniably cavernous! The rear hatch lifts high and is self-supporting. And a heavy-duty loadbay liner means trips to the tip or garden centre are of the 'no worries' kind.

Built to withstand a brutal life, how does the Barbarian ride and drive in civvy street? Actually, surprisingly enjoyable: it rides far better than you might expect, especially if you already know that at the front it has a double wishbone and coil spring set-up with robust leaf springs over the rear axle (which improve ground clearance for off-road work).

Where there's still tarmac on the roads it handles dependably so long as you don't mistake it for a hot hatch and you don't forget that it's designed to haul 1,045kg of stuff in the load-bed — which is why if you're gung-ho with the loud pedal its tail can feel a tad skittish on wet corners and roundabouts when not carrying any 'ballast'.

Speed humps, potholes and broken blacktop are felt but in a heads-up kind of way — we were never seriously jarred even though some of the country roads around here appear to have been imported from the third world.

And around town the Barbarian is not the lumbering giant it looks; it goes where it's pointed and you feel rather invincible. So, treat it right and it'll serve you faithfully both as a 'can do' pick-up as well as a versatile and well-equipped family 'bus'.

Once off the public road the Barbarian's low ratio settings and generous ground clearance make it feel very much at home. While its Super Select 4WD system — long proven in the Shogun — enables on-road driving with either two (2H) or four wheels engaged (4H) for extra grip the instant it's needed, it also has two low ratio settings for serious off-roading situations and which make use of a differential lock to keep you in control and moving.

Operated by a transfer shift lever alongside the autobox's selector lever, these two modes are 4HLc and 4LLc. 4HLc keeps the vehicle in all-wheel drive high range with the centre differential locked and power evenly distributed between the front and rear wheels — just right for better traction on rough roads or on sandy or snow-covered surfaces.

4LLc is the same again but with the transfer box's lowest gearing providing greater torque for climbing or descending steep inclines at very low speeds, or for going through deep snow, mud or sand. To shift into or out of 4LLc the vehicle must be stationary.

Shifting between two- and four-wheel high can be done on the move at speeds up to 62mph. Obviously, 4H is the mode of choice when towing. Plus, in addition to the security of four-wheel drive, the Barbarian adds a stability and traction control system to keep things in apple-pie order.

The power-assisted rack-and-pinion steering (adopted from the Shogun) is light to use and in town, combined with its class-leading turning circle, good side and forward visibility, and an autobox to take care of the gear changing, it makes this big beastie surprisingly manoeuvrable and undaunting to thread through traffic. Actually, once you're at ease with its size, it's really satisfying to drive around in.

The smooth-changing autobox is a boon — and not just in urban traffic. The automatic transmission goes one step further: it emulates your driving style to change gear as you do — quickly adapting its shift pattern to change earlier when you're in a rush, or later when you're feeling more relaxed.

And, whenever you want to be in total control (for instance, overtaking), you can simply move the selector lever to the left into Sports mode then nudge it forward or back to change gear manually. The engaged gear is always displayed in the driver's info panel, and appropriate downshifts are made automatically in manual mode as your speed drops.

Under its snazzy pre-fight black cloak the Barbarian Black has a bare-knuckle confidence and ability to rough it out wherever you take it, with no sign of a knockout punch from any other pick-up in the ring. — MotorBar