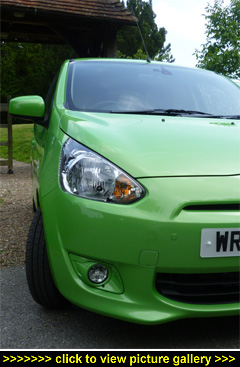 “Small and streamlined is as good
a way to go as any — if, that is,
you’re aiming for maximum miles
per gallon. So if economy is your
passion, then say konnichiwa!
to Mitsubishi’s new Mirage...”

THE NEW MIRAGE FIVE-DOOR SUPERMINI STEPS NEATLY into the Mitsubishi Colt's shoes — which it replaces — and it sips fuel with the best of them. In fact, the Mirage is the lightest, most aerodynamic and most efficient petrol-powered five-door hatchback range on the market — but then you'd expect good aerodynamics of something named after a military fighter plane.

It's also the only model in the UK today to offer 100g/km of CO2 or less across the whole line-up, which means zero road tax and no London Congestion Charge. Fuel economy across the range is between 67.3 and 68.9mpg (official combined figures).

Powering the Mirage is a new generation of lightweight petrol engines. UK customers have two choices: a three-cylinder 69bhp 1.0-litre (grade '1' trim only); or a 1.2-litre three-pot engine that powers the rest of the range ('2' and '3' spec cars). The 79bhp 1,193cc models get Stop & Go as standard. All engines come mated to a five-speed stick shift while the top-spec Mirage offers the option of a CVT automatic transmission, which is what we've been road testing this past week.

One consequence of its aerodynamic-led looks is that body sculpting is there primarily for function — hence the minimal letterbox slit of a front grille and the oversize rear roof spoiler that's been wind tunnel-optimised.

However, our test car came in a can't-miss-me metallic 'Pop Green' that more than made up for its wind-cheatingly clean-cut body styling.

Inside it's also clean-cut. The dash doesn't protrude into the cabin, meaning more room for passengers. An equally neat and orderly centre panel with a high-gloss piano-black finish houses the straightforward controls for the audio and AirCon (which does a refreshing icy cold).

Unlike many, the Mirage's glovebox opens wide enough for easy access, but not so low that your stuff spills out. Other storage is provided by three dual-use cup-holders and okay-size door pockets with bottle-holders.

The seats, upholstered in a dark purple-and-black patterned fabric with metallic highlights that actually looks rather good, are deceptive: they might look simple but are well-shaped with enough, but not too much, bolstering and built-in lower back support to keep you comfortable. And climbing in and out of them is easy.

The driving position is very good even though the nice-to-hold three-spoke leather-rimmed wheel only adjusts for height. Seat base height adjustment and adjustable front belts ensure the driver is sitting comfortably before driving off. Shin room is equally good, with a comfy rest for your left foot; and there's plenty of space for big feet in the two-pedal footwell.

Visibility is fine all round so placing the Mirage in traffic or when parking in tight spaces is no hard-to-master trick — and a best-in-class turning circle gives you the same edge enjoyed by London's Black Cabs.

While the front cabin accommodates two, the rear compartment goes one better — three can travel side-by-side on the plain-looking but comfortable rear bench although two adults would be happier with no third party between them. There's ample headroom and legroom for a near-six-footer sitting behind another near-six-footer.

Luggage-wise there's a reasonable 235 litres for shopping or luggage with passengers travelling in the back, but fold the rear seatbacks and that goes up to 910 litres.

The seatbacks don't fold totally flat but flat enough to make it a working cargo-carrier when needed. There's about a seven-inch drop down to the boot floor but the loading sill is not that high, and when the seatbacks are folded there's a small step-up from the boot floor but nothing that should be a problem — Mirage owners are unlikely to be carting around washing machines. A tyre repair kit lives under the boot floor.

Keys in your pocket or bag, press the button on the door to unlock and climb aboard (both front doors and the tailgate work the same way); finger the start button and the 1.2 fires up cleanly. On the move the Mirage's no slowcoach — in fact in CVT guise its 0-62mph time of 12.8 seconds feels agreeably sprightly.

Drive it hard and you'll find it has an eager-to-please nature with a typical three-pot signature engine note — likeably thrummy! The CVT transmission offers a Sport mode (flick the selector lever half-an-inch sideways to the left) that really keeps it on the boil and is surprisingly effective when cutting along winding secondary roads.

On motorways its wind-tunnel-sculpted 'skin' keeps noise down and economy up and ensures it doesn't feel out of its depth at the legal limit; in fact it feels reassuringly stable — remember, it only weighs-in with a light 865kg kerbweight.

Talking of the CVT... it's a nice fluent transmission that changes seamlessly and, really, you don't even notice it going about its business. Just how a good auto should be. The Stop-Start is well integrated and while you can turn it off, there's absolutely no reason to.

In everyday driving you wouldn't expect to match those figures, but we drove our CVT Mirage pretty hard and still recorded an overall average of 50.6mpg. Very impressive for a petrol engine, particularly a 1.2-litre.

If you're trying your best to be economical, the third dial in the dash is there to help: it's an eco-meter that lights between one and three green bars depending on how light-footed you're being; keep the throttle close to the floor and you'll be red-flagged but in the nicest possible way. But it's not annoying or intrusive; just keeps you in the picture.

Small cars can be pretty wide of the mark when it comes to ride quality but Mitsubishi has got the Mirage fettled about right given its likely usage — it does a good job of smoothing out the lumps and bumps without derailing the handling. The steering is fit for purpose and when you brake you stop without any drama. The Mirage's mission statement is to keep things comfy and economical. Mission accomplished. — MotorBar