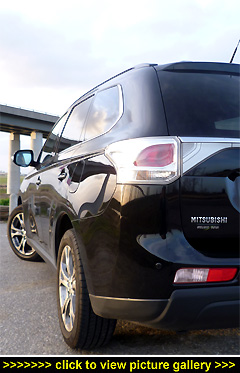 “Mitsubishi has upped its game by
using a new 2.2-litre turbodiesel
to power its latest third generation
Outlander — which has also been
designed to cater for hybrid plug-in
technology that’s coming later in
2013. So, to wait or to go? Well, as
the 2.2 model is available right now,
we thought we’d get behind the
wheel without delay...”

NOT ONLY IS WHAT'S UNDER the bonnet new, but so too is the bonnet and all the rest of the bodywork. While previous 4x4s from Mitsubishi have looked tough as well as actually being tough, the third-gen Outlander SUV wears a much smarter suit.

This new mid-size five/seven-seat Outlander sports a far more urbane look — no more Mr Machismo, as previously epitomised by the gaping Evo X-style front-end. Instead the nose is now smart and elegant, the slender headlamp units linked by a pair of slim satin-chrome bars either side of the Mitsubishi three-blade propellor emblem, effectively underscoring the bonnet while simultaneously crowning the wide black grille.

From the A-pillars back the new Outlander's flanks are long and smooth, the only ornamentation a chrome flourish defining the kicked-up lower glasshouse trim. Finished in black, our test Outlander was smart enough to look at home in any executive car park.

The heart of its go-anywhere skills-set is its 'Multi-Select' electronically-controlled permanent all-wheel drive system. There are three 4x4 modes: 4WD Eco; 4WD Auto; and 4WD Lock. Most of the time 4WD Eco — which affords a higher level of active safety while also optimising fuel economy and emissions — provides drive to the front pair of wheels. However, the instant road conditions call for more grip, the 'intelligent' system engages full-on four-wheel drive.

Actually, it's 4WD Auto that's the normal and default mode; and it's a no-brainer that 4WD Lock is the max-traction setting used for tackling the most demanding conditions both on- and off-road. To switch between modes, all the driver need do is to push the 4WD button alongside the traditional handbrake on the centre console.

In 4WD Lock the Outlander cuts the mustard off-road. Improved ground clearance with short front and rear overhangs give it impressive go-anywhere ability even on the smart 18-inch alloys shod with wide 225/55 tyres.

If you've owned one of the previous generation Outlanders then you'll see straight away that the light and airy new cabin is a marked step-up. Piano black trim, carbon-fibre inserts and satin chrome highlights boost the ambience. The leather clad seats are supportive and comfortable.

And if you're the one doing the driving you'll quickly set a fine driving position thanks to powered seat adjustment along with decent height and reach of the sporty, leather-rimmed wheel. For the record, the wheel also has remote controls to help keep your hands where they should be — you'll find voice, phone, and audio controls (on the left spoke), and cruise, speed limiter, and distance for the adaptive cruise control (on the right). A decent rest for your left foot (Size 10+? Not a problem!) is also proved in the knee- and shin-friendly footwell.

You sit high, as you'll discover once you get behind the wheel, and can see the end of the bonnet — there's also good visibility to the sides and rear (a rear-view camera is supported by audible front and rear sensors).

You'll also appreciate the clear instrument pack that keeps you informed of all the important stuff, including range-to-empty and average mpg.

The touchscreen SatNav displays in 3D and also shows the posted speed limit as a road sign — handy. And you'll be able to make use of, and share, the centre armrest without worrying because it doesn't cramp the trad handbrake. Decent outer armrests are on the doors. Even the tilt-and-slide sunroof is labour-saving, with one-shot open and close.

The door mirrors powerfold on demand, and also automatically when locking and leaving. Tinted glass plus privacy glass at the rear don't just keep the paparazzi guessing, but help keep your skin looking young by filtering out the rays.

If you're a passenger travelling in the second row, don't sulk — it's a premium row because along with regular seat comfort and lots of space you also have the ability to slide your seat backwards or forwards (over a 250mm range) to maximise legroom, recline your backrest and make good use of a large, padded drop-down centre armrest for lounging. Six-footers will feel very much at home here. Unusually, there are bottle holders in the second row door pockets as well as in those up front.

Row three offers a pair of wide 50:50 split seats — each large and comfortable enough (they're properly sprung, have backrests that adjust, height-adjustable headrests) to accommodate a real-world grown-up. Reaching or exiting them doesn't, unlike on some seven-seaters, call for limbo dancing skills, thanks to the easy-to-use, sliding function of the middle row that lets those riding in seats six and seven 'walk-in'. If you're carrying adults back here, the second row seats will need sliding forward.

They're versatile, too, when it comes to a spot of the old load-lugging: their backrests drop forward individually; or they can be folded and stowed away out of sight beneath the floor.

Well considered touches include an under-floor cargo box to store the luggage cover cassette when its not required (a very sensible feature); and the tailgate on our range-topping GX5 model featured power opening and closing — brilliant when you've got your arms full of shopping.

The boot capacity with row three seats folded away is a generous 591 litres; and with both rows folded this goes up to 1,022 litres — and you can carry items upto 1.69 metres long.

Drivers planning on venturing into the 'outlands' will be reassured to know that there's a proper spare wheel. Other practical touches include a non-slip tailored boot carpet along with an easy lift-out heavy duty rubber load liner.

The 2.2-litre is a four-pot common rail, direct injection, 'low-impact' Euro 5 turbodiesel unit that emits 153g/km of CO2, and it gets to 62mph from standstill in 11.7 seconds. On the right road it will run to 118mph.

And, courtesy of 147bhp and 265lb ft of torque between 1,750 and 2,500rpm, it's responsive and has enough urge to move the Outlander along at a fair pace while keeping the decibels down. Officially, the automatic can return 48.7mpg in the Combined Cycle — running mostly in 4WD Auto, our real-life test average came out at 38.1mpg. 4WD Eco users should do better.

The turbodiesel is helped in its labours by a new six-speed automatic — a conventional torque-converter autobox that replaces the second-gen's twin-clutch transmission. The new transmission has been fitted because a hydraulic torque converter-equipped system such as this is smoother, especially when working off-road, as well as being 'cleaner'. Smoother it most definitely is — changes, especially when using the slim aluminium steering-wheel paddles, are seamless.

Safety-wise it's equally well specced, with a five-star Euro NCAP rating and new features such as City Crash Provision. The Lane Departure Warning System will keep you on course, while the Forward Collision Mitigation System detects obstacles on the road ahead and applies the brakes if you don't or if, for some reason, you can't.

Even at low speeds the Adaptive Cruise Control maintains a safe distance between you and the vehicle in front. It can detect vehicles up to 200 metres away but when there's no vehicle in front, it works as a regular cruise control system, maintaining the speed set by the driver. It will also, if the vehicle in front slows down and stops, also slow the Outlander down and bring you to a safe and steady standstill. If this happens then ACC will return full control of the vehicle to the driver.

The Outlander drives confidently and while it looks a biggish beastie, it's physically lighter than it looks, easy to place and handles with a light touch. Ride comfort is well fettled, and shows a good balance between handling and ride. It bowls along, taking surface irregularities, including speed humps, in its stride, and while there's some body lean during cornering, it's generally very supple. And when you need to rein it in, the brakes haul the Outlander down from speed quickly and without fuss. Engine braking is also good when you 'paddle down' through the gears.

Today multi-tasking is king, whether it's portable media or cars. The Outlander not only multi-tasks decisively when it comes to switching between people and packages, but it also drives off-road as well as it does on tarmac. Factor in seven very usable seats, plenty of dual-usage space, and practical towing abilities (2,000kg braked), and the new Outlander is much more than just a contender. — MotorBar