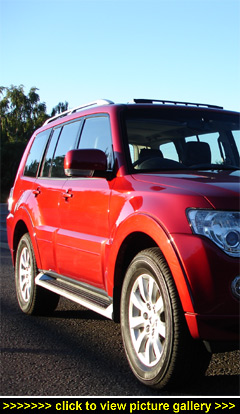 “Mitsubishi’s Shogun is known,
used and liked all over the world.
In its latest incarnation it is as
smart as it is skilled off-road, and
as competent transporting people
(up to 7) as it is carrying cargo...”

CLIMB ABOARD THE LATEST MITSUBISHI SHOGUN and it's very easy to forget that it's an extremely capable off-roader. Outside it looks big and square but inside the five-door LWB model it's just big. Surprisingly, once behind the wheel, even first-timers don't find it intimidating — the high-set, commanding driving position and large glass areas make for excellent all-round visibility and quickly dispel any worries about placing the square-jawed, 4.9-metre-long Shogun accurately on the road.

Climb aboard — you do, literally, but side steps and big doors make it easy — and you'll find yourself sitting in a smart cabin. The dash is deep and uncluttered, with all controls exactly where you'd expect to find them. Large central air vents deliver a good flow of chilled or warmed air from the effective climate control system. The leather-wrapped steering wheel's meaty rim feels good to the grip; three sides of the boss carry remote controls for the cruise, audio and telephone, all with sensibly large buttons.

Other well-considered details include deep sun visors that extend sideways to cover the area behind the rear-view mirror and even the large tilt 'n' slide electric sunroof features fail-safe one-shot controls. The rev-counter incorporates a display showing the currently selected gear and about the only criticism one might make is that the speedometer is calibrated (as are quite a number these days) in 20mph increments — 10mph is much clearer in today's 'slow down' climate.

Between the rev-counter and speedometer dials is a display icon showing the four wheels and diff lock of the selectable all-wheel drive, and clearly indicating the status quo. The tiptronic auto's gate is straightforward, with the manual override gate to the left: if used, tapping the lever forward takes you up a gear; back takes you down.

The leather seats are supportive and are surrounded by lots of space in all directions. They're also set well off the floor; good news for leg comfort. The footwells are large, so driving in all-terrain boots is not an issue. Knee-room is also good — particularly appreciated when the going gets bumpy off-road. And although the steering wheel only has tilt/height adjustment, it's not a problem. The driver also benefits from power-adjustable lumbar support and there's a reversing camera to make parking and manoeuvring in tight places as easy as it can be.

The 'stadium' back seats (set six inches higher than those in front) are well-shaped to match the front pair. Better still, the backrests of each side of the 60:40 split rear seats adjust through a large range; in fact, they go all the way to completely flat for sleeping! They also tumble forward in two easy movements, creating a huge 1,790-litre load area. Rear passengers also enjoy their own A/C temp and fan controls plus overhead air vents and a large centre armrest and, courtesy of the deep glasshouse, first class views out.

The third-row, two-seater 'Fold2Hide' bench seat folds away into the floor; pull the lever and it jumps up, complete with integrated headrests, to make the Shogun a full seven-seater.

These rearmost two seats offer almost as much head and shoulder space as in the front two rows, and we fitted in two adults for short trips. Use the third row, however, and boot space is reduced to 215 litres. Third row side windows, incidentally, are of the push-out, side-hinged kind and provide fresh air without unwanted draughts or buffeting.

At the tail, a full-width, side-hinged back door opens on the near-side, so it's perfect for UK roads/pavements and makes for practical and easy loading and unloading. Another nice touch: on windy days the rear door can be locked open. And, freeing-up inner space, the full-size spare wheel is mounted externally.

All Shoguns (three- and five-door versions) come with the same engine under the bonnet: a cleaner, more efficient 3.2-litre four-pot DI-DC direct injection turbodiesel unit with increased power and torque. Brake horsepower is now 197bhp (up from 168bhp) and torque is a muscular 325lb ft (up from 275lb ft). Excellent news not only when it comes to towing but off-road too, where torque is unquestionably king.

On first acquaintance it sounds a tad vocal — not wholly surprising given the 3.2-litre displacement in a four-cylinder block. So while the engine isn't as quiet as a mouse, it is reasonably refined and you quickly get used to it — all part of the Shogun's honest and reliable character.

The auto 'box — a five-speed tiptronic type with a sequential Sports mode — is pretty slick and eager and, coupled with 325lb ft of torque from 2,000rpm, serves up a strong stream of smoothly delivered overtaking urge with brawny mid-range response. On motorways, it makes for refined high-speed cruising. Top speed of the LWB Shogun is 111mph and it gets to 62mph in 11.1 seconds — nothing wrong with that, especially considering its sturdy construction and 2,275kg kerb weight.

Fuel consumption from this much 'greener' Shogun is about what you'd expect: officially, the combined cycle figure is 33.2mpg — a week's hard driving saw a consistent 27.4mpg and most owners would not have a problem with that. For the record, CO2 emissions are 224g/km for the auto and 212g/km for the manual versions.

A robust monocoque chassis with built-in ladder frame ensures that the Shogun is more than able when it comes to hardcore off-roading — in fact, many off-road enthusiasts consider them brilliantly capable in the rough. For most everyday owners, the fact that it's equally competent on road in bad road conditions will be enough.

The Shogun is confident enough to make no pretence of being anything other than what it is — a rather classy, go-anywhere off-roader that just happens to have decent on-road ability as well. There's a deeply satisfying feel of real substance about it — this Shogun, you just know, is a vehicle that will take you almost anywhere. Safely and reliably. In a word, it feels bulletproof.

And well mannered too; with strong brakes (vented discs all-round with hefty callipers) and positive steering. It's easy to drive and with its comfortable ride, it really is a relaxing vehicle in which to travel.

Another big 'pull' for prospective Shogun owners will be its towing capacity: a braked 3,500kg. In other words, it can pull just about anything most people will ever need to tow. All in all, it's not hard to see its enduring appeal — and understand why 7 out of 10 Shogun owners trade in their old one for a new one.

With prices ranging from Ł26,499 to Ł37,999, the Shogun offers a lot for the money including an exceedingly well equipped cabin, a versatile interior (up to seven seats / excellent load space) and genuine 4x4 off-road capability. And it feels like it's built to last forever. — MotorBar