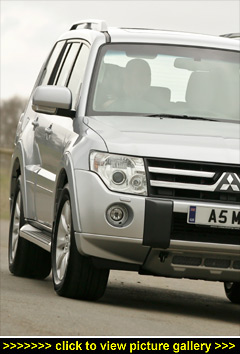 “4x4 owners strike back! Sales of
SUV and 4x4 vehicles are 15% up and
now account for one in eight new
vehicles sold. A good time to check
out the latest Mitsubishi Shogun...”

MITSUBISHI'S HIGHLY RATED AND LONG SERVING SHOGUN range was first brought to the UK in 1983 in three-door form and, two years later five-door, seven-seat versions arrived to make it the first heavyweight 4x4 with a multi-seat layout. In fact, the Shogun's introduction is credited with Land Rover being forced to bring their middle-of-the-road workhorse Discovery to market.

The Shogun was pitched at the right time between the hard working Land Rover and the elitist Range Rover. It appealed on price, durability, a long warranty and pure on- and off-road good driving manners and capabilities. Being a multiple winner of the Dakar Rally helped as well.

Today, next to the Toyota Land Cruiser, the Shogun (or Pajero and Montero as it is known in other countries), is the world's best-selling 4x4. It can be found in most countries working for a living as well as providing day-to-day transport for all classes of people from royalty to renegades.

In the UK, the Shogun finds favour not only with private users in towns, cities and the countryside but it is in service with the Police, Fire and Rescue Services, Utility providers, the Airport Authorities and, of course, the high profile Highways Agency.

The long-serving Shogun heavyweight 4x4 has recently received a series of updates. All models, both three- and five-door, now use an updated, cleaner, more efficient 3.2-litre, DI-DC direct injection turbodiesel with more power and torque.

The improved eco figures have not slowed the Shogun's performance: top speed is increased to 111mph and 0-62mph now takes 11.1 seconds — par for the course for a diesel powered mud-plugger. The increased torque has certainly improved mid-range response and will not only benefit its towing performance but also its ability to climb very steep gradients or wade out of tyre-clinging deep mud.

Customers have the choice of manual or automatic transmissions depending on which level of specification is chosen — the five-speed automatic has a tiptronic-type sports mode. Traction Control and Active Stability Control are both standard fit items. Prices range from Ł26,499 to Ł37,999 and to keep running costs to a reasonable level Mitsubishi offers a three-year/37,500-mile service plan for Ł420.

There are Equippe, Elegance, Warrior and Diamond versions covering all the customer bases from workhorse to executive business users. All are heavyweight 4x4s — imposing to look at with reasonable on-road handling and brilliantly capable off-road or in bad road conditions.

My test model was the 3.2 DI-DC Elegance 5-door automatic priced at Ł34,999. Not cheap, you might think, but still competitive when you compare it against the heavyweight 4x4 competition for ability and specification.

I have been lucky enough over many years to have driven Shoguns of many generations in many countries around the world: on road and off; in sand, snow, swamps, jungle, over mountains, in the sea, in motorsport action and even an amphibious prototype!

Fitted with the appropriate grippy tyres, the Shogun is close to being the ultimate off-roader but not at the expense of it being horrible to drive on road — there is no point having ultimate off-road traction if the on-road performance is too poor to live with. In fact, that really has been the success element of the Shogun: real 4x4 capability plus strength and durability, a versatile interior for multiple passenger carrying or load space and a high level of specification.

Today's Shoguns are also very capable tow vehicles with braked towing weights ranging from 2,800 to 3,500kg. No surprise, then, of their popularity with the recovery services, farmers, caravaners, boat-towers, equestrians and, of course, travellers.

Depending on personal taste the Shogun visually will not appeal to all-comers. Perhaps it is a bit too brash and glitzy for some 'sophisticates' and its Tonka Toy styling might not go down with the 'yummy mummy' brigade on the school run but it is big, strong, offers excellent vision from the interior, is easy to get in and out of and roomy. It's also tough and shrugs off the dents and scrapes which occur in the urban or rural jungles we all have to negotiate daily.

In addition it serves up a comfortable ride, pretty well balanced for a big 4x4 although it rolls during cornering but never so much as to feel unstable. The five-door model is easy to drive; better than its 4,900mm length would suggest. The handling is trustworthy, the visibility first rate, the steering positive and the braking strong. In automatic form, gear selection is a doddle and even the transfer lever selection is, literally, child's play.

The rear row of two bench seats that gives it maximum passenger carrying options folds flat into the floor when not in use, creating a large load space of 1,790 litres. The rear seats can only really be used for short trips as they provide minimal comfort and are difficult to get in and out of.

However, they will appeal to some families where their children have playmates or the school run is a shared rota system. I know — been there done that, sorry, my wife has. With the third row in use, boot space is a minimal 215 litres.

Reasons to buy one include superb off-road ability, easy to drive on road, much improved engine performance, better fuel economy, lower emissions, high specification, strong and well built, seats up to seven and comes with three years' unlimited mileage warranty. My only criticism is that it's overdue for a styling change rather than another facelift.

Because of its workhorse status the latest Shogun is not going to be acceptable for all customers in the heavyweight 4x4 market. I'm sorry to say there is still considerable snobbery involved in this sector: "mine's posher than yours, old chap" still applies in some social circles. But while it isn't a perfect vehicle, the Shogun is a very good one. One that cannot be overlooked on price or capability by anyone who is remotely astute. — David Miles