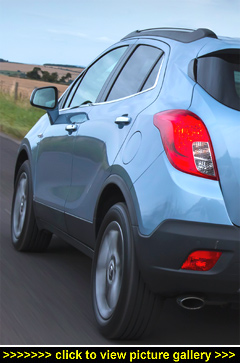 “‘Compact’ plus ‘SUV’ — a popular
pairing of two trending terms,
flavoured with a hint of café society:
together they spell ‘Mokka’...”

WHILE THE ECONOMY may well be on the mend, one part of it isn't showing any signs of changing: motorists' new-found liking for a supermini-proportioned but perfectly-satisfying set of wheels for them and their family. And Vauxhall can sell you a very nice one indeed…

Externally, its tasty Mokka SUV is neat enough to fit in any urban space but at the same time there's more than enough room and kit inside its 4.2-metre long, five-door body to ensure downsizing really has no downside.

Looks-wise it's a smart blend of high-ridin' rugged with racy; a flattering rising waistline lends it an appealing coupe-like side profile — and finished in Deep Espresso metallic, our test car looked masculine and distinct yet, refreshingly, not at all in-your-face.

Of the three engine choices, the turboed 138bhp petrol is the nippiest while officially promising a not-to-be-sniffed-at 44.1mpg. Real-life though is where it counts — the 1.4 4x4 we drove long and hard for a week returned a healthy 40.5mpg.

While you can get your Mokka with two- wheel drive, if it's available we see no point in not having it because it's no longer just in the depths of winter that it can come to your aid; flooded roads are, worryingly, also becoming more regular occurrences and like snow and ice are managed far more safely when four wheels are doing the gripping.

And that's not forgetting an SUV's other major contribution to making our potholed urban roads more palatable — the higher ride height and ground clearance. City kerbs or country tracks, the Mokka takes them all in its stride.

Although not a kick-ass off-road machine, the Mokka's 4WD system is capable enough away from the blacktop (the front skid-plate fitted under its chin is there to protect the lower front bodywork). The Mokka's on-demand four-wheel drive system comes into play automatically at the very first sign of traction loss.

Under normal conditions it's the front wheels that lay down the power — and into the bargain maximise fuel consumption. However, when called for by snow or standing surface water, the torque split can transform from full front-wheel drive to an even 50:50 split between the front and rear axles. Descent Control is also standard for some extra authority off-road.

Despite the rugged looks, riding in the Mokka is a very civilised affair. Drivers will appreciate that inside function takes priority — meaning that the cabin and fascia are smartly styled but not, thankfully, slaves to fashion. Eminently liveable, the cockpit will still look topical 100,000 miles down the road.

Getting in (and out) is dead easy thanks to wide-opening, carpark-friendly doors — all four of 'em, not just the front pair. Once aboard it's roomy and there's generous headroom. Airy, too, thanks to the deep glasshouse.

The driving position is spot-on: you sit high off the floor for a commanding view of the road ahead and can actually see the tip of the short bonnet — a real boon in downtown traffic. Rearwards visibility is good enough to reverse without relying on the rear sensors although you've got them (and at the front, too).

The leather-rimmed wheel is good to hold and houses remote control buttons for cruise, speed limiter, voice, audio, and phone operation. Using the button on the indicator stalk calls up the driver's information (essential trip data as well as graphic navigation prompts) displayed between the clear white-on-black speedometer and rev-counter.

The front seats — upholstered in all-season-suitable cloth — are well shaped with effective but not intrusive bolstering, and while there's no lumbar adjustment the seatbacks provide good support, as do the long seat bases. Height-adjustable seatbelts and a comfy left-foot rest are more good features.

And you don't need to be an over-achiever when it comes to tidiness to appreciate the numerous in-cabin storage areas that number not just one but a pair of gloveboxes, a bin and a tray in each front door, lidded and open bins in the central tunnel as well as a slide-out drawer under the front passenger seat.

The SatNav screen is sited exactly where it should be: top dead centre of the fascia. And that's not its only strong feature — the spoken commands are well-timed and unambiguous.

Other nice touches include a swan-neck handbrake with the release button on top where it's easy to squeeze with your thumb; and the SatNav's timely offer to direct you to the nearest garage to top-up when your driving range drops to 50 miles. The driver also gets an inboard drop-down captain's armrest that — unlike many — doesn't foul the handbrake.

Another welcome surprise is that the Mokka is nowhere near as short as its styling would have you believe — as confirmed by the decent space in the rear cabin. The big surprise is the full fist of headroom, masses of foot room and, thanks to the minimal transmission tunnel, room for a third rear passenger seated in the middle. The rear backrest is set at a relaxing angle; there are mag pockets; and a useful 3-pin 230-volt rear power outlet which comes in very handy for charging laptops and the like on the move.

In keeping with its practical character is a good-sized boot — the Mokka's 356 litres should be large enough for most owners. Pop the high-opening tailgate and the flat load lip makes light work of loading and unloading heavy cargo. When you need more room for boxes rather than bodies simply fold the 60:40-split seat bases forward then drop the seatbacks down and you'll have 1,372 litres to fill — all with a perfectly flat floor right through to the load sill.

Another neat touch is the slide-out bike carrier that, when not in use, is housed within the rear bumper. And to save you emptying the boot to get at the tyre repair kit, it's stored in the rear wing. As, too, is a first aid kit. If you prefer to keep your cargo on the outside, then the Mokka's 1,200kg braked towing capability will keep you smiling.

If you're wondering whether 1.4 litres will be enough to cope; don't. While it's admittedly the smallest capacity engine in the Mokka line-up, the turbocharged four-cylinder petrol engine has more than enough kick because alongside its 138bhp it also develops 147lb ft of torque between 1,850 and 4,900rpm.

Driving through a no-fault, clean-shifting six-speed manual 'box, the 1.4 is equipped with a Start-Stop system and emits CO2 emissions of 149g/km, which pegs road tax at Ł145 from the first year onward.

The high-revving 1.4 is a lively and capable powerplant — it will get the Mokka off the line and up to 62mph in a crisp 9.4 seconds; midrange pick-up and response to the loud pedal is also eager, especially above 2,000 revs once the turbo is doing its boosting best.

At the legal limit it has an unruffled pace and it lopes along quite happily; given its head, it will run the Mokka 4x4 up to a licence-busting 118mph. More importantly, at 75-90mph across the Channel on the autobahns and autoroutes it feels stable and remains quiet.

Vauxhall recently re-tuned the Mokka's suspension — and it shows; it feels wieldy and rides and handles well on our decaying British roads. Improving the dynamic mix is the light but feelsome steering that lets you thread it crisply through bends and corners where it's helped by good body control and decent grip. The brakes, too, are competent. Given it's high-sided bodystyle it's far more entertaining than you might have expected. All in all then, this latest Mokka is a nice steer!

A sharp and shapely, compact crossover, Vauxhall's Mokka comes with a smart, practical cabin, versatile load carrying abilities and decent kit and all at an affordable price. And it's so easy to live with! — MotorBar