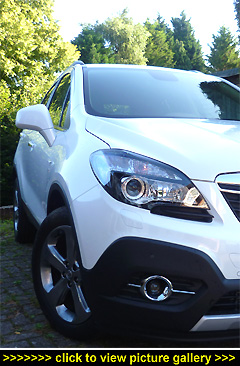 “There’s a trend out there — and
it’s a big one; and it’s all about
so-called crossovers or, as they’re
correctly known, compact SUVs.
It really got into its stride a year or
so back, fuelled by a fresh supply
of more sophisticated crossovers
that keep increasing the choices —
compact SUVs like the stylish all-
wheel-drive Vauxhall Mokka...”

TECHNICALLY, A COMPACT SPORTS UTILITY VEHICLE is one that measures less than 4.3 metres in length. While the Japanese have been ahead of the curve for twenty or so years, in Europe and the UK they're the most rapidly growing new car sector, taking in, to name but a few, the likes of Nissan's Juke and Qashqai models along with Skoda's Yeti.

These compact SUVs epitomise the all-your-toys-in-one-box solution for multi-tasking cars that downsizing drivers are clamouring for, spurred on by excessive fuel prices, escalating motoring taxes and a pound that buys less by the week.

Now, racing to do battle with the already established crossovers comes Vauxhall's new Mokka, offering both 2WD and 4WD variants of the dynamic-looking all-new five-door lifestyle model that sells from just Ł15,995. And if you're going for 4x4 looks you may as well go for 4x4 traction, too. Which is why we ended up behind the wheel of the SE 1.7 CDTi 4x4 Start/Stop model reviewed here.

Makes sense, too, because when we British motorists aren't being snowed under we're in danger of being washed away — at least four-wheel drive puts the odds back in the driver's hands. And did somebody mention the ever-worsening roads? Off-road-tuned suspension helps out there too.

So what's the Mokka got? For a start, five doors integrated into a stylish, almost-coupe-look bodyshell that's chic enough for those who are merely interested in making a fashion statement, and, for those who aren't or who genuinely enjoy an active lifestyle, a high-riding stance for tackling more challenging terrain than city kerbs. Protective cladding around the bumpers and wheel arches plus protective skid plates (nose and tail) underscore the 'rugged' look without going over the top.

What makes the Mokka so likeable is that its four-wheel drive system looks after itself, being of the on-demand variety. We could go on about the main components of the AWD system — the front axle differential, drive shaft, 4x4 rear axle drive and the control module, as well as the electro-magnetic multi-plate clutch — but for most of us, the only question is: 'What button do I press?'

The AWD system is activated automatically within a fraction of a second as soon as any wheel slip due to a lack of traction is registered, and in the process sharpens up the Mokka's handling characteristics — most notably when negotiating corners at higher speeds or accelerating with some verve.

The 4x4 SE rides on substantial 18-inchers but it was very easy on passengers over speed humps, and while there's some body lean surging through twisty bends it's well-controlled, and doesn't hamper the Mokka which grips reassuringly and holds its line. For a four-by-four, the ride comfort is very good.

Under the Mokka's short but shapely chrome-rich snout beats a willing 1.7-litre CDTi 128bhp turbodiesel — but it can just as easily be an unleaded-drinking 138bhp turbocharged 1.4-litre or a naturally aspirated 1.6i with 113bhp. For those who don't much like using their left hand to stir a manual gearbox, an auto option is available; but only for the front-wheel drive diesel.

In six-speed manual guise you also get Start/Stop and an official combined cycle fuel consumption of 55.4mpg (45.6 urban and 64.2mpg extra-urban) plus CO2 emissions of 134g/km. Our usual hard driving style saw a week's average of 53mpg. Amazingly good or a 4x4 given that our 600 test miles included plenty of town work and quite a bit of load-lugging.

Spec-wise, the SE is Number One, capping the range above S, Exclusiv, and Tech Line with prices starting at Ł15,999 and topping out at Ł23,490 for the Mokka SE 1.7 CDTi 4x4 Start/Stop with a six-speed manual transmission.

Climb aboard. Despite the 'jacked up' look, access to both the front and rear cabin is very easy, and there are damped pull-down grab handles above the door frames JIC — the driver doesn't need one and instead gets a handy sunglasses holder.

Inside the Mokka it's all very civilised and, in the SE models, very comprehensively equipped. It's also unexpectedly — having earlier used the 'C' word (compact) — roomy, with a good six inches of headroom above the front seats and loads of elbow and shoulder room.

Best of all, though, are the 'ergonomic' sport seats — they're nicely 'huggy' and proved to be extremely comfortable especially over very long distances. And so they should be with every-which-way adjustment, extending under-thigh support and decent bolstering.

Height-adjustable seatbelts, generous steering wheel adjustment (both height and reach), a close-to-hand gearlever (with an easy change action), a traditional handbrake with a new take (a shorter handle with the release button on top instead of at the end, so it's easier to release with your thumb), a proper 'captain's' inner armrest (so much better than sharing a central one with your front seat passenger) plus very smart tan-and-black leather upholstery all contribute to the premium feel, with three-stage seat heating and, helped by high-mounted seats, A1 visibility all round, putting the seal on a first class and relaxed driving position.

Fit and finish is impressive — you really could be in a prestige model — and it's obvious that a lot of thought has gone into making the Mokka's cabin a great place to be. The cabin is both well thought-out and well served with cubbies, cup-holders and practical-sized two-tier door pockets (there are even two gloveboxes).

The colour-keyed tan dash is neat, as too is the instrument pack and clear digital speed readout, the centre stack's 'busy'-looking switchgear logical, the dual-zone AirCon serves up plenty of air as icy cold or as hot as you like, and the multifunction (cruise, speed limiter, voice, phone, and audio) leather wheel's thick and meaty rim is satisfyingly grippy. The optional SatNav works just fine, which is precisely how you want it to work.

The Mokka's boot is regularly shaped and will take 356 litres of your luggage. When you need more, folding and tumbling the 60:40 split rear seats opens up a practical (and very big for a small car) 1,372-litre cargo bay with a totally flat floor that, thanks to a mid-thigh loading sill height, is easy to fill and unload.

The lightweight rear parcel shelf doubles as a luggage cover and can be removed in a jiffy; it's also easily stowed away without wasting any load space. Four sturdy bag hooks make the boot shopping-friendly; lashing eyelets on the boot floor allow you to secure large or heavy objects.

You'll also find a first aid kit and a puncture repair system (in a side cubby) along with some extra storage under the lift-up boot floor.

Adding to the Mokka's versatility is its braked towing weight of 1,200kg as well as, for those with a love of two wheels as well as four, a unique-in-segment option of a fully-integrated bike carrier system (Flexbike) which when not in use can be stored in the rear bumper.

Rear passengers benefit from privacy glass and get one-shot power windows just like those seated ahead of them; and their windows also drop fully down into the rear doors. Neither do back seat passengers lose out on comfort because their seats are every bit as supportive and comfortable, Two can share a well-padded central armrest with cup-holders; and if they have to give it up for a third rear passenger all three will still enjoy the ride — and there's more than enough foot room to go round.

Bearing in mind we get to drive some truly fabulous cars — Audi's V10-powered R8 Spyder and the Ascari KZ1, to name a couple of the most desirable — it says a great deal about the hard-to-fault Mokka that we were genuinely sorry to see it go back. Just goes to show that automotive satisfaction is out there and affordable. — MotorBar