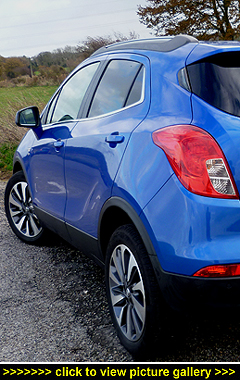 “Mokka; pronounced like Mocha.
One is a frothy Italian espresso
coffee with a caffeine and
chocolate kick to revive your drive;
the other is a crossover you can
drive to Italy to sample the real
thing. As the ad says: It’s your life.
Go drive it!”

THE NEW MOKKA X is a compact crossover with the X-Factor — all-wheel drive. And while this sector of the market is very much style-led, there's more than enough substance about the Mokka to keep it honest.

Even when its badging was X-less, the Mokka held its ground as one of the best sellers in its class, notching up over 120,000 sales in the UK since launch; and from 2015 it's been outselling its rivals to make Number One in its segment.

The breaking news is that this latest Mokka has been revitalised by a new 149bhp 1.4-litre turbocharged petrol engine with an automatic transmission and all-wheel drive. And that's on top of a spanking new dash that adds an upscale ambiance — and fewer buttons, with many functions now accessible via the touchscreen.

Fronted by a large chrome Griffin badge, shapely daytime running lights and alloy-effect protective front skid plate, the high-riding Mokka X manages to look modish and muscular at one and the same time — in fact its clever styling tricks you into placing its size higher up the SUV hierarchy: in real-life it's actually shorter, and taller, than you'd guess.

But the real eye-opener is inside, where an all-new dash treatment has lifted the cabin ambiance enormously in a way that Vauxhall's American owners GM would call 'upscale' but over here we'd call 'premium'. Cue leather upholstery, a nice mix of trim textures, generous use of high-gloss black with tasteful chrome highlights and detailing, and good fit and finish.

Standard too is Vauxhall's IntelliLink connectivity system that via the touchscreen provides hands-free phone calls, audio streaming, and photo and video viewing. By using the Projection icon on the touchscreen, drivers can select their preferred application when a compatible phone is connected via USB, making IntelliLink straightforward to use.

Apple CarPlay enables drivers to make calls, send and receive messages and listen to music through the touchscreen or by voice via Siri. Apple CarPlay supported apps include Phone, Messages, Maps, Music and a number of compatible third party apps.

And with the personal connectivity and service assistant OnStar, you get a 'guardian angel' travelling with you 24/7, 365 days a year.

In the event of the airbags deploying, for instance, OnStar automatically connects the vehicle to an advisor to establish if the emergency services are needed; if there's no response, emergency responders are immediately sent to the exact location of the vehicle. Good to know.

The most popular OnStar service is the myVauxhall smartphone app, which enables remote locking/unlocking of doors, online vehicle location and honking the vehicle's horn and flashing its lights.

You can also call up important data such as tyre pressures, send destinations to the in-car navigation system and manage the embedded Wi-Fi hotspot which allows up to seven devices to connect simultaneously in and around your Mokka X.

Crucially, the driving position (and visibility from behind the helm) is first-class: and that's down to the airy glasshouse and the high-set, easily accessed, well-padded and very supportive sports-style seats — both chairs have extending front base cushions for max under-knee support; both also get powered tilt and lumbar adjustment and three-stage heating that's not only quick but warms all the way from your mid-back down to your knees.

The driver, along with plenty of steering wheel adjustment and roomy footwells, gets a captain's inner armrest that doesn't block the trad handbrake (actually the swan-neck lever has a release button on top rather than at the end of the grip; but it all works very well). The headroom is abundant and the headrests simply click forward to engage in any of three positions before returning to their rearmost settings.

Also helping to keep the driver and front passenger happy are height-adjustable seatbelts, large twin cupholders alongside the handbrake, armrests on the doors, deep sun-visors, a useful small second 'pocket' to supplement the main bottle-holding door bins, and a lidded 'cave' ahead of the selector lever at the base of the centre stack with Aux, USB and 12v power.

The six-speed automatic has a P-R-N-D-M selector lever that in 'M' allows up or down manual shifts by pressing on the front or back edge of the switch inset into the top of the selector knob. Very neat and very intuitive! Obligingly, all the driver's information (including that essential, a digital speed readout) displayed between the main white-on-black dials is easily scrolled through using the control on the end of the indicator stalk.

Given the Mokka's compact footprint, there's quite a bit more rear cabin space than might be expected; more than the average family hatchback, that's for sure. Access to the back seats is easy, courtesy of large doors — and installing child seats/small children is a hassle-free job.

The rear seats sit higher than those in the front so views out are good, but if you'd rather snatch forty winks than watch the world go by that's fine — drop the wide central armrest (with built-in cupholders), store any oddments in the well-sized door bins and pockets, adjust the easy-slide and well-padded headrests… and relax. As easily done as said, courtesy of roomy footwells and enough knee-room to sprawl.

A minimal floor tunnel means room for three pairs of shoes side-by-side (and the bodies that go with them) so while 4+luggage is comfy, five is doable. Plus wherever you sit in the back you'll get your fair share of headroom; a full fist of it. And while the front windows are tinted, the rears (and tailgate) are darker for some extra privacy.

At 356 litres the Mokka's boot is family-sized. And it's easy to load-up because there's no lip to hump things over so even heavy items are a breeze to manage. For cargo rather than luggage, the rear seat bases can be flipped forward to nestle against the front seatbacks and the 60:40 rear backrests folded down — this gives you a seamless and totally flat-floored loadbay of 1,372 litres.

When full lugging duty calls, the rigid but lightweight luggage cover is easily removed and stowed. And as the spare wheel has been replaced with an emergency tyre inflation kit (stored in the offside wing cubby), that frees up the large well under the boot floor for extra storage. Tie-downs are sturdy; and there are bag holders for the weekly shop.

When it comes to powerplants there's a good selection on offer: a turbocharged 1.4-litre petrol with either 138 or 149bhp (the more powerful being available with a six-speed automatic transmission and all-wheel drive); a non-turbo 1.6-litre petrol with 113bhp; and a brace of Vauxhall's critically-acclaimed 1.6-litre CDTi 'Whisper Diesel' engines (108/134bhp).

Buyers can have either two- or four-wheel drive, and there are automatic transmissions for those who prefer to have their gears changed for them. It's the new-to-range 149bhp 1.4i Turbo automatic petrol engine version that we've been driving — and it's proved to be an excellent choice.

Flexible and agreeably peppy, it's as quick as you'll need, proving to be a safe overtaker and yet unruffled when asked to press on along B-roads or cruise motorways. The autobox does a very decent job of delivering the power smoothly throughout the rev-range; progress is fuss-free, and there's always some in reserve to meet the demands of your right foot.

Helping us with our test was none other than Storm Angus. While understandably not cheered by many, it was nevertheless a 'perfect' storm against which to pit the Mokka. Its torrential rain and howling 80mph winds go some way to explaining our 35.8mpg test average (officially 43.5mpg for the Combined Cycle) — but still a decent showing for a four-wheel drive crossover with an automatic transmission and a turboed petrol engine.

Handling-wise, the 1.4's 180lb ft of torque is of an ample sufficiency (as Rolls-Royce are fond of saying about their engines' outputs) to serve the Mokka X's intelligently driven four wheels. There's certainly plenty of grip and the Mokka is in fact more agile and composed than you may have been expecting from a tallish machine.

Quick, accurate and consistent steering helps, as too does the well-checked body lean — notably so when cutting through corners and threading along undulating country lanes. The brakes (discs all round, vented at the front) are reassuringly effective — as proved by a seriously hard emergency stop on wet roads from 50mph to avoid an over-the-limit cyclist. Overall, the Mokka X is a sure-footed and likeable drive, even in intimidating weather conditions such as those stirred up by Storm Angus.

There's no doubting that the Mokka X's all-wheel drive system improves on-road stability, but it can also be used for some soft-roading off the beaten track.

In normal everyday use it runs as an economical front-wheel drive car. But it can instantly redistribute power between the front and rear axle (from 100% to the front to 50:50 front:rear).

Although you're unlikely to notice, its all-wheel drive system activates when the car is stationary to prevent wheel slip when moving away, then engages as soon as the driver depresses the clutch pedal.

Once driving, the power is transferred back to the front wheels. The all-wheel drive system is then ready and waiting whenever driving situations trigger it to provide maximum traction and stability such as on slippery roads, when cornering… or during an emergency stop!

Also making it feel very much at home on British blacktop is the fact that Vauxhall have tweaked this latest version's steering and suspension specifically for demanding UK roads. The other side of the dynamic coin — the ride — feels nicely pliant, which is good news for those not behind the wheel.

While there's a wide choice of compact crossovers out there, the well-rounded Mokka X delivers a lot of what you get from a bigger crossover — but for less money. A nattily-styled package that comes with standard-fit pizzazz. So, hey, don't just get a life; get a Mokka X! ~ MotorBar