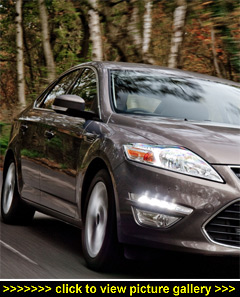 “The latest Ford Mondeo is now
good enough to be considered
an ‘executive’ model. The only thing
holding it back is its ‘Mondeo’
moniker...”

HAVING JUST DRIVEN the revised Ford Mondeo range of five-door hatchbacks and estates, I can say right away that there is absolutely nothing wrong with these new, improved, better built, more luxurious and well equipped cars.

In reality they are now executive models and should be an option for business and retail users who traditionally buy the BMW 3/5 Series, Audi A4/A6 and Mercedes-Benz C/E-Class in the upper medium and executive sectors.

Only the Mondeo name — for British users — doesn't do justice to a very fine range of cars. But Ford is missing out on the opportunity to acquire financially better-off retail customers who will not consider owning a Mondeo because of the name.

Vauxhall saw the light with the move from away from using the Vectra title — synonymous with fleet users — when they launched its replacement, the Insignia. Virtually at a stroke, with better styling, better quality and improved driving dynamics, they saw sales to retail customers rise from just 5 per cent to 35 per cent.

Ford should do the same with Mondeo as they strive to improve the appeal of their medium-sized models to private buyers who need to be proud of ownership. Last year Ford sold 34,500 Mondeos in the UK, slightly less than the Vauxhall Insignia and 4,500 less than the BMW 3 Series.

Other than the BMW 3 Series there is now no upper medium or executive segment models in the UK's top ten sales chart as customers — retail, fleet and business user-choosers — are forced to downsize.

But there is still money to be made, mainly with premium models. As good as the latest Mondeos are, the name does not have the cachet to attract such buyers. Like it or not, middle and senior management business people and the better-off retail buyers are, in my experience, happy to say they drive a BMW, Audi or Mercedes. But a Mondeo — I don't think so.

Ford's latest Mondeo range is now available in UK dealerships and one of the headlines for the new range is the introduction of a new high-tech, British-built 1.6-litre direct injection turbo petrol EcoBoost engine which offers sporty performance while returning over 41mpg.

This new 1.6-litre engine joins the 2.0-litre EcoBoost engine which was introduced across Ford's large cars earlier this year, sharing the same direct-injection, variable-valve-timing and turbocharging.

In five-door form, the new Ford Mondeo equipped with the 1.6-litre 160PS EcoBoost engine and six-speed manual transmission is capable of 134mph and 41.5mpg in the Combined Cycle. CO2 is 158g/km, so the annual road tax cost is Ł155 and Benefit-in-Kind tax is 20 per cent.

The Mondeo 1.6-litre EcoBoost's fuel consumption and lower personal and employer taxation combine to make the car comparable with a diesel-powered 2.0-litre TDCi; 53.3mpg, 130mph and road tax of Ł110.

Further Ford Mondeo powertrain news follows in February next year when the 1.6 TDCi diesel engine with start-stop technologies arrives in UK showrooms. This Mondeo returns 65.6mpg (combined) and features a specially calibrated 115PS version of the Dagenham-built engine and will be fitted with an aerodynamic kit to minimise drag as well as low-rolling resistance tyres.

Further newsy highlights about the revised 2011 model year Mondeos include the new sharper looks — more of an evolution than new but they do look very smart and follow the more upmarket appeal of the S-Max, Galaxy, Kuga and the all-new C-Max and Grand C-Max ranges. Other pluses are better specification, better built, better value for money — and definitely more desirable.

In Ford's own words, they are targeting executive customers with the latest Mondeo five-door and estate models and some of the new features added, depending on the spec, include Windsor leather upholstery, LED lighting, lane departure warning, power rear child locks, blind spot information, speed limiter, rear-view camera and a premium sound system.

But still very much affordable in their segment — the prices are the same as the prior models on Edge (Ł17,295), Zetec (Ł18,445) and Titanium X (Ł21,945) variants. Titanium models are increased to Ł19,945 to reflect the addition of power start, powered passenger seat and LED interior and daytime running lights. There is also a new spec level introduced to the range called Titanium X Sport (2.0-litre EcoBoost 240PS, 2.0 TDCi 163PS and 2.2 TDCi 200PS) priced from Ł26,145.

My very brief test drive of the new-look Mondeo was in a five-door estate with the new 2.0-litre 200bhp (203PS) EcoBoost turbocharged direct injection petrol engine in Titanium spec, expected to be a popular choice with private retail customers.

The new bright and sharp styling lines of the latest Mondeo impress on first sight — it looks a classy vehicle. If size matters, then the overall length of 4.8m will impress as well and so too will the load capacity of 542 litres with the rear seats in use (folded, this goes up to a cavernous 1,733 litres). It is big, comfortable and great to drive. The suspension is very compliant yet this large estate remains very agile.

The Titanium specification offers all the equipment any premium brand buyer could want and the quality is impeccable. When could you say that before about a Mondeo?

The EcoBoost petrol engine is exceptionally refined, eager and responsive. The 221lb ft of torque provided from just 1,750rpm gives it turbodiesel-like responses and flexibility without the traditional diesel engine clatter.

Mated with Ford's six-speed twin-clutch PowerShift auto gearbox, this combination is perfect for all types of driving. There is no penalty on fuel economy either — 32.2mpg during my short test drive around the hilly and winding Cotswold roads. Officially it will return 36.6mpg with CO2 emissions of 179g/km so road tax is Ł300 in the first year, reducing to Ł200 a year after that.

Classy styling, huge on space, extremely comfortable, high quality interior, agile despite its size, great engine and transmission and very attractive pricing. Okay, so it is a big car to park but its on-road presence really should appeal even if the Mondeo name does not. — David Miles