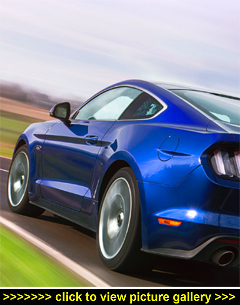 “‘Un-learn’ is Ford’s latest marketing
buzz — it’s intended to remove our
preconceptions of the brand and past
products. Strange, then, that they’ve
been wheeling out nostalgia as a
hook to catch owners wanting Ford’s
latest and first-ever official right
hand-drive Mustang muscle car...”

FIFTY YEARS AFTER THE ORIGINAL model was introduced in the US, the arrival of the sixth-generation Mustang in Europe has come about through Ford's global 'One Ford' philosophy. This allows cars from any of their global sources to be sold in any of their other markets as long as there is enough demand to make it worthwhile to produce a product fit for local conditions.

Surprisingly the UK is already the largest market in Europe for Mustangs. Which has allowed Mustang to officially come here. Over 1,000 UK customers have already received their new Mustangs and advance sales have already topped 3,500.

Enviably, Ford can sell as many Mustangs as they have customers for — and there's no restriction on supply from the factory. After the initial demand has been met, annual UK sales are expected to level out at between 2,500 and 3,000 per year.

Eight out of ten UK customers have ordered the Fastback two-door coupe over the two-door Convertible. Most of them have also specified the 5.0-litre V8 410bhp petrol engine; and over half have decided to go with a manual transmission. Not surprisingly, Race Red is the most popular colour.

Buyers love its heritage and know what it is. Of course, part of that knowing what a Mustang is comes from its 3,000+ appearances in films — most notably James Bond's Goldfinger and, of course, Steve McQueen's Bullitt. Amazingly, Ford's latest Mustang Facebook page has registered over eight million 'likes'.

But where to get one? Easy enough — these new right hand-drive Mustang Fastback and Convertible models are being sold in the UK through the recently introduced, 70-strong specialist Ford Stores network who will also handle the new Ford Focus RS.

Clearly part of the initial demand from UK buyers comes from petrolheads who love V8 American engines and their dramatic soundtracks; part of the allure also comes from the Mustang's legendary muscle-car history. And more from the value-for-money pricing with its raw power and comprehensive specification that makes the high running costs easier to swallow.

Prices start from Ł30,995 and rise to Ł34,995 for the Fastback coupe and Ł34,495 to Ł38,495 for the Convertible, both with six-speed manual transmissions. Both engines are available with a six-speed automatic gearbox option which adds Ł1,500. Both body styles are two-door, four-seaters. The initial powerplant options for both body styles are a 5.0-litre, V8 GT (with a normally-aspirated 410bhp and 390lb ft petrol engine) or a 2.3-litre, 4-cylinder turbocharged EcoBoost petrol unit than manages 312bhp and 318lb ft.

Unlike its predecessors from 1964 onwards, the new sixth-gen Mustang, built in the USA at Ford's Flat Rock Plant in Michigan, has been engineered from the start to include right-hand drive models.

On this side of the 'pond', American muscle cars are not known for their handling finesse — great in a straight-line but not so hot during cornering and generally with a soft and sloppy suspension. Unlearn that because this new Mustang is claimed by Ford to be the most technically advanced version ever.

It features a new chassis of high-strength steel pressings, ultra-high strength aluminium castings and steel tube laser-welded components all bonded together to improve rigidity by 28%.

However, it's still over 200kg heavier than some of its German competitors; and bigger and wider than, say, an Audi TT or a BMW 2 Series Coupe — its potential competitors in terms of price. In terms of size and muscle-power the more expensive Audi RS7 Sportback, BMW 6 Series Coupe or Vauxhall's VXR8 Saloon are rivals for your money.

The new Mustang has independent MacPherson strut suspension at the front and an independent multi-link system at the rear instead of the archaic live axle and leaf springs system.

Ford claim the handling has been developed to deliver high levels of balance, responsiveness and fun driving. To this end official European market models get Ford's Performance Pack as standard (this adds front strut braces, a thicker rear anti-roll bar and stiffer springs). Also, unlike their American market cousins these Mustangs get uprated 380mm front brakes with six-pot callipers, a larger radiator and an additional oil cooler.

On a twisty road or a trackday, a lift of the toggle switches quickly adjusts steering effort, engine response, transmission and electronic stability control settings to Normal, Sport+, Track, or Snow/Wet settings. For V8 models there is also a Line Lock launch control function which applies the front brakes allowing drivers to spin and warm up the rear tyres.

The latest Mustang retains the long bonnet and short rear deck design, fronted by a sleek nose, and steeply raked windscreen and rear C-pillars (there are no B-pillars in between). A low roofline links the two and wide flanks accommodate significantly wider tracks. Retained is the iconic trapezoidal grille with the signature galloping Mustang pony set centrally within it. Below that is what Ford call's the 'shark-bite' front under bumper. These European-market cars also have daytime running lights integrated in the foglight housings with, at the rear, 'tri-bar' LED taillights.

So how does the new Mustang size-up? Well it's a few millimetres short of 4.8 metres long, 1,918mm wide and 1,394mm tall. Inside, with the front seats positioned for adult comfort, rear seat legroom is minimal. The coupe roofline means access to the back seats needs to be a stooping affair — and watch out for those long front doors; not good for side-by-side UK parking. At just 332 litres the boot is not big — but then who buys a Mustang for carrying luggage?

The cabin is a mix of modern and retro: a high level front fascia panel reaches out to the high waistline and smallish windows; and there's a hefty three-spoke steering wheel with some control buttons and two large instrument dials plus an information panel all viewed through the wheel.

A common feature with other European Ford models is the eight-inch touchscreen positioned centrally but low down in the fascia which accommodates the infotainment functions, Ford Sync2, and the reversing camera's views. It's also home to the SatNav which, oddly, is not standard-fit but is available as an option together with an uprated 12-speaker sound system for Ł795.

Beneath the screen are conventional ventilation, heater and air-con controls and beneath those are cheap looking chrome effect toggle switches — shades of old-school American automotive trim. The Convertible version has a powered multi-layer fabric roof. The manual gear lever is a dimpled effect, ball-shaped knob and this provides a firm but short throw gearchange which isn't the slickest to use.

What it lacks are electronic driver aids such as adaptive or adjustable suspension settings, blind spot monitoring and emergency radar braking that are readily found in premium brand European sports cars. That said, quite obviously it's the Mustang's heritage and the desire for being 'retro' that appeals to die-hard UK Mustangistas.

The best-selling 5.0-litre V8 petrol engine pumps out 410bhp and now has variable valve timing with four valves per cylinder to meet EU6 emission levels. While this slow-revving unit provides 390lb ft of torque at 4,250rpm, for racier driving full use is needed of the six-speed manual 'box — which I found better than the six-speed auto's slow and inconsistent gearchanges.

The auto's okay for 'cruising' but not so great for 'bruising' fun driving. Top speed is 155mph and zero to 62mph takes 4.8 seconds although due to its bulk progress felt slower. There's still enough punch to 'kick-out' the rear driving wheels under hard acceleration, especially on wet roads.

Officially the Combined Cycle fuel economy is 20.9mpg but we actually achieved 24.3mpg on busy country roads. Short bursts of acceleration brought the real-life figure down to 14mpg but overall the consumption quickly recovered to over 24mpg as an average.

At 299g/km the CO2 means you'll fork out Ł1,120 for the First Year's road tax (Ł515 from Year Two). Should a business executive get a Mustang as a company car then the Benefit-in-Kind tax will be the maximum 37%. Insurance costs are high too: Band 46E.

Overall the V8 Mustang provides a modern-day interpretation of yesteryear muscle car motoring. Yes you still get the burbling sound from the V8's exhaust; Yes you still get a shove in the back as you accelerate off the line.

But it now handles in a more precise way, similar to European 'muscle-cars': the ride is on the firm side but generally comfortable; and it corners well enough and the steering is well weighted. The fact that it's not been too sanitised, together with its iconic name, heritage and styling, is precisely what's making it a success here in the UK.

If big V8s are not your forte, the four-cylinder 2.3-litre EcoBoost turbo petrol unit with 312bhp and 318lb ft will, if you buy one, save you Ł4K. Top speed takes a token hit, dropping form 155 to 145mph while the more important zero to 62mph time takes 5.8 seconds. Real-world fuel consumption for the manual 'box is 22.1mpg and emissions of 179g/km mean road tax is Ł500 (reducing to Ł270 for Year Two).

For those not interested in performance 'bragging rights' but who want the Mustang for its looks, this could well represent the best 'cruising' choice in terms of purchase and running costs. However, it feels a bit weak in the engine department, lacking the 'grunt' of the V8 and the exhaust soundtrack lacked the 'theatre' of what a Mustang should offer.

Fans will happily live with the thirsty V8 and the high running costs and taxes to drive one of these 'right hooker' Mustangs because overall they offer excellent value for money, are highly specced with a roomy front cabin and a comfortable ride and serve up well balanced handling. ~ David Miles