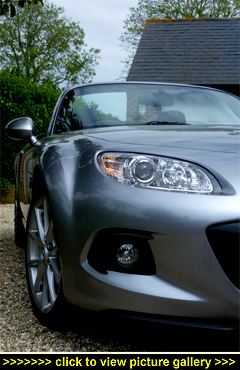 “Helen of Troy had nothing on the
MX-5 — while the daughter of Zeus
launched a thousand ships, the MX-5
(the world’s best-selling roadster)
has sold not by the thousand but by
the hundred thousand; at last count it
was approaching 945,000 world-wide.
Fortunately, unlike Paris, you don’t
have to kidnap one and start a war to
have some fun...”

Twenty-five years ago the MX-5 single-handedly revived the virtually extinct market for roadsters. Regularly honed and technically updated over the intervening years and three generations, it's still the accomplished fun-to-drive two-seater sports car it was designed to be.

Fast forward to 2014 and there's a new fourth-generation MX-5 waiting in the wings (due to be unveiled in September this year). So, what better time to drive the still-current model and savour the perfect 50:50 front:rear weight balance underpinning a driving experience that's made the MX-5 an icon for so many enthusiasts (and also the holder of the Guinness World Record for the best-selling two-seater sports car of all time).

The MX-5 majors on two things: open-to-the-sky motoring and smile-inducing handling. As to its topless charms, it all starts with a press on the 'top down' button atop the centre stack — twelve seconds later all there'll be behind you is a clear rear deck. And above you, infinity…

The Roadster Coupe's two-piece metal roof power-folds away into a well between the seatbacks and the boot, so roof up or down there's always a guaranteed 150 litres of space in the top-loading boot for luggage. Use 'soft' luggage and you'll be amazed at what can be squeezed in.

While you can buy a cheaper rag-top MX-5 (a 124bhp 1.8-litre for Ł18,495), the metal-roofed 'Coupe' versions, which start at Ł19,995, provide better all-year-round practicality as well as extra convenience, refinement, and additional security. With the roof up the MX-5 is a classy looker although still patently a 'roadster' rather than a fixed-head coupe.

Externally measuring four metres from nose to tail and 1.7 metres wide, the MX-5's black-themed cabin has been thoughtfully packaged to maximise space. Not as tight-fitting as a F1 car's cockpit but still with that let's get to it 'tailored for the track' feel.

The sports seats are low-slung, leather-clad items with integral headrests; effectively bolstered, they provide decent built-in lumbar support, making long journeys as pleasant as short ones. Near six-footers have ample legroom as well as a fist of headroom with the roof in situ. It helps, too, that the ride, which while necessarily 'sportingly' firm, is far more compliant than expected — even speed bumps won't give you the hump.

And snug doesn't mean 'no place to stow' — backing up the fair-sized lockable glovebox there are ample cubby-holes including a dual-usage storage bin with a sliding lid alongside the handbrake that can be used for cups or oddments; ahead of the gear lever at the bottom of the centre stack is another open storage bin (with a rubber mat to minimise rattling and to keep things in place) that's also conveniently close to the AUX jack for connecting an MP3 player to the HiFi.

Additional storage is provided by a cubby with a lockable lid between the seatbacks in the rear bulkhead — by the way, when you need to top up with petrol this is where you'll find the release for the filler flap. There are also small round bins for bottles ahead of each door handle, along with net pockets on both doors.

Handling 'kit' includes a set of ten-spoke 17-inch alloys, sports suspension with Bilstein dampers, a front suspension strut brace (for improved steering response), Limited Slip Differential, and a stability and traction control system. And, as you'll see the moment you lower the roof for the first time, a pair of smartly-finished roll-hoops behind the headrests.

Visibility is good and although the slim steering wheel only adjusts for height, a perfect driving position is quickly set. The driver's seat is height adjustable, and nice touches include the seatbelt guides on the top outer shoulder of the seatbacks that ensure stretch-free belting up. And your left shoe gets a well-placed footrest for those long trips when you're 'in the cruise'.

The fairly wide and hip-height centre tunnel adds to the 'cockpit' feel, as does the stubby gear lever that falls perfectly to hand. There's a trad handbrake, which will please most drivers, especially those who know a thing or two about J-turns.

More good news on the logically arranged centre stack is the Bose HiFi and the excellent 3D SatNav that's so easy to destination-set and which delivers clearly-spoken and timely directions — especially welcome in busy traffic. Also close by are the switches for the heated seats that offer not one, not two, not even three but five degrees of 'roast' — whatever the chill factor, you'll be snug as a bug on even the coldest days. Particularly as the very efficient climate control offers dedicated settings for roof-up and roof-down modes. Very civilised.

The small leather-rimmed wheel (remote buttons for the audio and cruise are on the horizontal spokes) feels the biz as your fingers wrap around it. Dead ahead is a five-dial instrument cluster; the crisp white markings stand out sharply from their black faces and keep you in the picture on the move — and, confirming the MX-5 takes hard driving seriously, there's an oil pressure gauge slotted between the rev-counter and speedo.

And with the MX-5 it's the driving thrills that are the backbone of the entertainment: whereas with engines there's no substitute for cubic inches, when it comes to handling brio there's no substitute for rear-wheel drive — for sheer unadulterated chuckability the only way is, no, not Essex, but RWD. And it's rear-wheel drive that elevates the MX-5 above any hot-hatch when it comes to serving up a gratifying feast of smile-inducing driving.

The steering's sharp and the MX-5 communicates eagerly through the helm; the brakes are progressive and powerful and there's good grip from the 205/45 Bridgestone Potenzas. Sport Tech versions come with a sports suspension and Bilstein front and rear shocks, along with a front strut brace.

Taken to extremes (not on public roads, thank you), the MX-5's tail will step out — but any impending breakaway is well telegraphed and easily catchable by an alert pilot. All part of the RWD fun experience. Naturally, electronic traction and stability control is fitted JIC you're not quite the polished driver you think you are…

In this day and age, 157bhp might not sound tyre-smokin' potent but then the MX-5 is a lightweight player: its bonnet and bootlid, and engine subframe and suspension control arms, are all aluminium, as too is the front-midship-mounted engine.

Alongside its 157bhp, the petrol-drinking, four-pot, 1,999cc motor generates 138lb ft of torque. The best of it comes some way up the rev-range — peak torque hits at 5,000rpm and max power at 7,000rpm — so if you really want to gallop those horses you'll need to make full use of the six-speed manual 'box to stay in the powerband. Not a problem. The opposite in fact, thanks to a set of well-weighted pedals and the crisp, short-throw gearchange action that adds to the intimacy the driver shares with his or her MX-5.

Getting to the benchmark 62mph takes under eight seconds; top speed is 136mph. For drivers who like to play by the rules, 70mph in sixth gear calls for a relaxed 3,000rpm. If you do find yourself driving on an autobahn, another nice touch is that at 100mph the speedometer needle points at an easy-to-spot twelve o'clock.

Officially you should see 25.9mpg in town, 46.3 touring and 36.2mpg combined. Real-world driving over a good mix of fast and slow roads saw a week's average of a more than acceptable 35.1mpg.

Top down it's all tickety-boo: the tall seatbacks and a mini-windbreaker between the headrests between them block any draughts that would otherwise reach your neck, and buffeting is noticeable by its absence. At the legal limit, cruising roof-down on the motorway is pleasant; topless driving elsewhere is even more rewarding and something you'll find yourself unable to stop doing at every opportunity. Long Live The Roadster!

For driving enthusiasts the MX-5 is one of the most affordable and also one of the most entertaining sports cars on sale, one that guarantees grin-generating blacktop motoring every time you fire up the engine. Enjoy. — MotorBar